Robert Preston Hershberger, Bob to all who knew him, died on Sunday, May 20 at his home in Greencastle. He was 54. 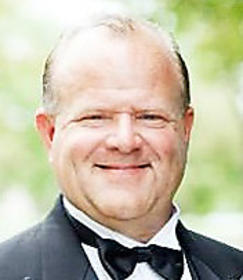 He adored his children, family and many friends.

His generous spirit and energy were legendary at DePauw. He served as chairman of the Modern Languages Department for two terms, founded the Servicio en las Américas Program, helped create CTEP (Community Technology Enhancement Program), contributed to the founding of the Hispanic Studies Program and was a long-standing co-author of the Plazas and Rumbos textbook series, which are timely and well-regarded publications in the field.

In Greencastle, he directed the Crown Street Community Center. He gave of his time in the Greencastle Schools, coached for the Putnam County Youth Soccer Association, and freely taught community Spanish at Asbury Towers, the police department and to his own colleagues at DePauw.

Bob was a loving father, a beloved colleague, friend and teacher, and deeply committed member of his community.

He is survived by his wife, Natasha Ryadovaya; sons William Sawyer and Matthew Nicholas; his first wife, Sarah McAdams; and daughters Kate and Annie.

He was preceded in death by his father, William Sawyer Hershberger, and leaves behind his mother, Ruth Tasker Hershberger Salter, sister Anne Hershberger Miller (spouse Ken) and nephews Preston and Jake.

Memorial services will be held at 6 p.m. Saturday, May 26 at Gobin Memorial United Methodist Church.

The family will receive friends from 4 p.m. until time of service on Saturday at the church.

In lieu of flowers please give donations to the Crown Street Community Center, 605 Crown St., Greencastle, IN 46135.