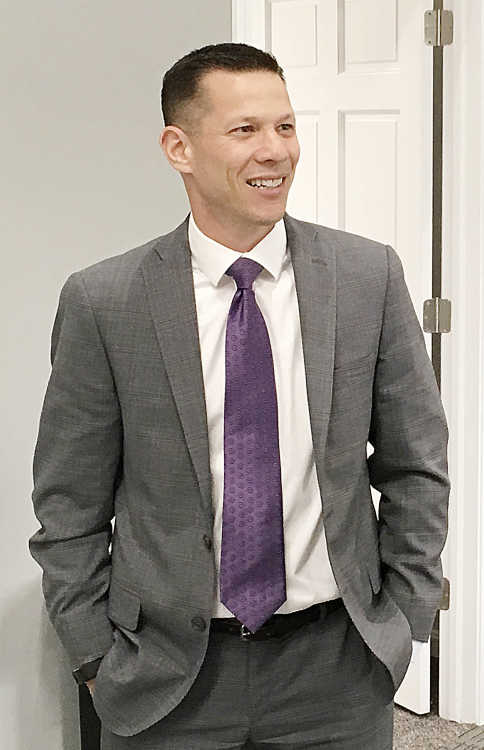 The city of Greencastle itself helped sell the new Greencastle High School principal on his new position, while two new assistant principals in the district really needed no introduction to the community.

On Monday, the Greencastle School Board approved Chad Rodgers as the new principal at GHS, while Yolanda Goodpaster was named the new assistant principal at the high school.

For Rodgers, who will be relocating to Greencastle from Mt. Vernon in Posey County, the fit in Greencastle seemed natural from the beginning, both the community and an immediate rapport with Superintendent Jeff Hubble and Assistant Superintendent Donovan Garletts.

“I got to interview with him (Hubble) first, he and Dr. Garletts, and it was just a natural fit,” Rodgers said. “They’re caring individuals and they had a vision that matched my skill set.”

Before that, Rodgers spent 16 years as a chemistry teacher and coach at Rossville High School in Clinton County.

He said the time spent in these small towns attracted him to Greencastle.

“Every place we’ve been it’s a nice town,” Rodgers said, before adding that he believes Greencastle is a cut above many of its fellow communities. “So many Midwestern towns are not surviving and this place is thriving. One little added piece is that DePauw University is right over there and that’s just awesome.

“And I jokingly said in the interviews that the Starbucks downtown probably sealed the deal.”

Rodgers earned his Bachelor of Science in chemistry from Purdue University, his Masters of Education from Graceland University in Iowa and his Indiana Administration and Supervision License from Indiana Wesleyan. He originally hales from Newburgh in Warrick County, where he graduated from Castle High School.

He will replace the retiring Russ Hesler, who has spent the last 40 years in various capacities at the GHS.

In addition to Hesler’s retirement, another vacancy at the high school came about when Assistant Principal Jennifer Finnerty agreed to step away from administration and back into the classroom in 2018-19, replacing Mark Jedele as physics and earth science teacher.

Hubble said Finnerty’s decision was a blessing, as no physics teachers had applied for the opening.

“Jennifer commented to me after 13 years of doing discipline, it’s going to be more fun doing physics,” Hubble said. 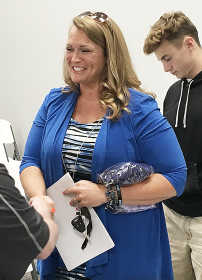 Into that void steps Goodpaster, a Putnam County native who previously applied for an opening at GCSC and had no desire to finish second again this time.

“I’ve always lived here so I’ve always looked for an opportunity and then it came about two years ago,” Goodpaster said. “It was unfortunate to get second in that competition, so when it opened back up I contacted Mr. Hubble and was super excited.”

Goodpaster is a 1997 graduate of South Putnam High School who went on to earn two bachelor’s degrees from Saint Mary-of-the-Woods College and a master’s and principal license at Indiana Wesleyan.

She has spent her entire 17-year education career in the Monroe-Gregg School District, serving in various administrative capacities since 2006.

Goodpaster has remained a Putnam County resident, which she feels will help her transition nicely into her new job.

“I know a lot of the community stakeholders in a lot of the different positions,” Goodpaster said. “As assistant principal, a lot of the people I will be dealing with I already know either personally or professionally. So contacts will be easy. It will just be getting to know the students and the parents.”

School officials went even closer to home when choosing a replacement for Stephanie Christopher at GMS, promoting Cupp from within.

Cupp was not in attendance on Monday, instead attending her daughter’s academic awards ceremony in Cloverdale.

All three administrators will be in place for the 2018-19 school year.