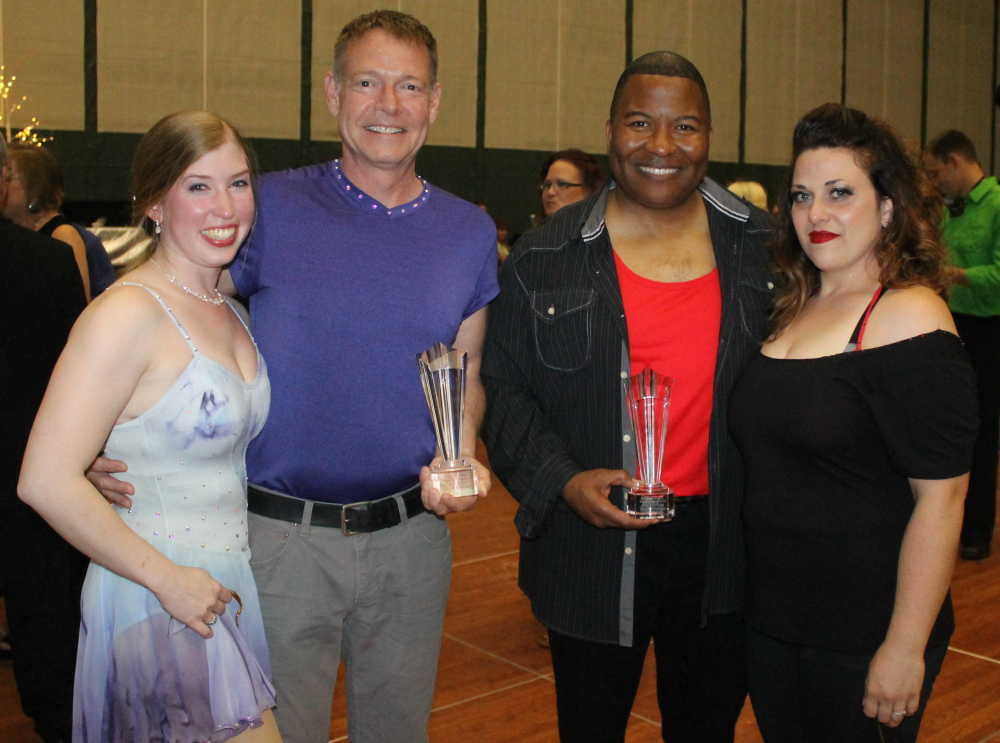 The teams of Sarah Bond and Andrew Ranck and DuJuan Presley-McFadden and Tara Gardner share the spotlight as 2018 co-champions of Dancing with the Putnam County Stars.
Banner Graphic/JARED JERNAGAN
Order this photo

How did the 2018 edition of Dancing with the Putnam County Stars Ranck compared to the previous nine events? It was DuJuan-derful.

The 10th annual fundraiser for the Putnam County Youth Development Commission (PCYDC) featured the first co-winners in history as the team of Andrew Ranck and Sarah Bond tied with the DuJuan Presley-McFadden and Tara Gardner for the title.

Even more importantly, two of the dancers were impressive in their fundraising, with Jill Albers named Fundraiser Extraordinaire after raising a record-setting $15,909 for PCYDC and Cathy Clodfelter finishing second with $10,027.

The excitement of Saturday evening definitely came down to the last two dancers.

Through eight dances, the favorites appeared to be either Albers and Logan Kuhne for their samba, the salsa that opened the night from the husband-wife duo of Jeni and Mike Balka or perhaps the tap routine from Stacie Stoffregen and Josh Bain. 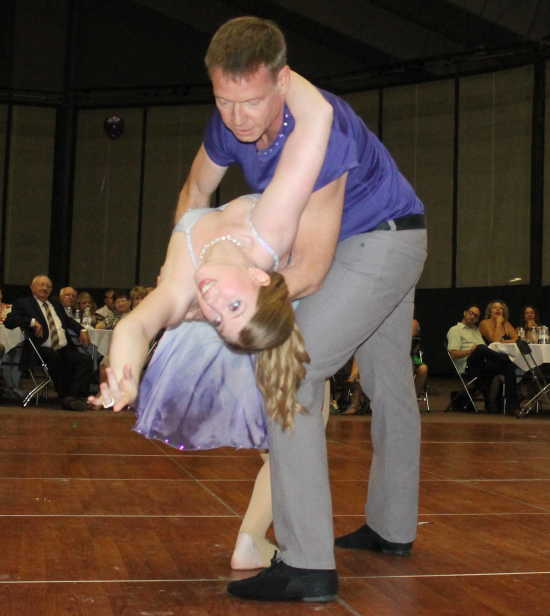 But Ranck and Bond threw down the gauntlet with their Viennese waltz/lyrical/freestyle routine to “Tightrope” from the soundtrack of “The Greatest Showman.”

It was just the kind of storytelling song that put Ranck at ease as a veteran of the stage, including the Putnam County Playhouse, where he has worked with Bond.

“We’ve worked together in theater before and we brought that same energy and collaboration from theater to the dance,” Ranck said. “We wanted to tell the story and Sarah helped us tell a story with her choreography. It was a story from the beginning to the end. And coming from theater, that helps. I couldn’t have gotten up there and just done a demonstration. It had to move from point A to point B and I think it did.”

Bond used Ranck’s ability and eagerness to perform to their advantage, even as he listed dance as his weakness when it comes to performance.

“Oh, my gosh, he was a dream,” Bond said. “I’m used to having a shy, quiet guy that I have to pull out of his shell. Andrew was not that.”

What they came up with was a performance that event judge (and former competitor) Sue Murray described as unlike any she’s seen in the event’s 10 years.

Ironically, Ranck and Bond came away from their dance with mixed feelings.

“We felt better at the dress rehearsal, but apparently we were wrong,” Ranck said. “It felt good but we wobbled and we corrected. I think that’s the important thing, we know how to correct together.” 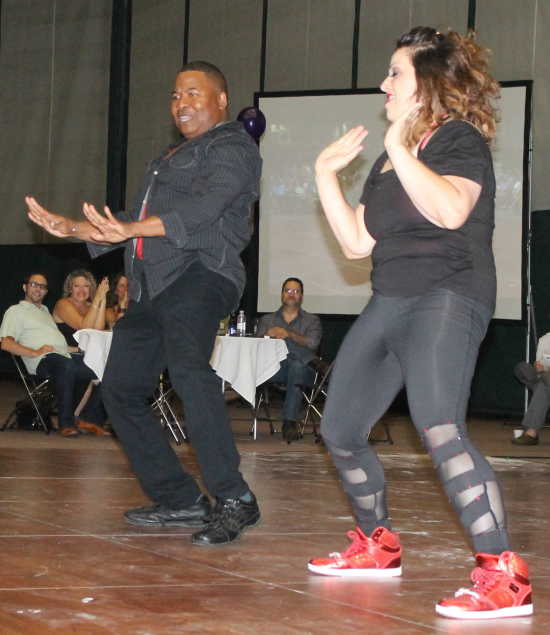 Closing the evening with a high-energy number, Indiana State Trooper DuJuan Presley-McFadden and dancing pro partner Tara Gardner dance their way to the top of the leaderboard Saturday evening as co-champions of dancing with the Putnam County Stars.
Banner Graphic/JARED JERNAGAN
Order this photo

With Ranck and Bond done, the only performers left were McFadden and Gardner, who were also not to be denied on Saturday.

If the previous dance had gently drawn viewers into the story, McFadden and Gardner grabbed the audience and didn’t let go with a high-energy mix of dance styles including hip-hop, Latin, jazz and a little bit of ballroom.

Even the music defied easy categorization, with Gardner choosing five songs she called the “Brown Sugar Mix,” playing off of McFadden’s nickname.

While McFadden had come into the competition saying he had no dance experience, that was true only in the formal sense, as he’s become reasonably well known as the dancing trooper who entertains otherwise flustered motorists while directing traffic at the Covered Bridge Festival.

Gardner used that energy and creativity in a routine that never had a dull moment.

“I loved it. It was fun. Tara’s an excellent instructor, she’s a professional,” McFadden said. “I had fun over these last four months and it was a great experience, not only for me personally but for everyone I met. It was a fabulous time.”

On top of all that, winning was an excellent bonus.

“Being co-champion is a great, great experience,” McFadden said. “I loved it.”

The owner of Dance Workshop in Greencastle and a veteran of every DWTPCS event — including choreographing the opening group number every year — Gardner definitely sees year 10 as one to remember.

“DuJuan is so much fun. He’s such a great person and I’m so lucky that I got to know him,” Gardner said. 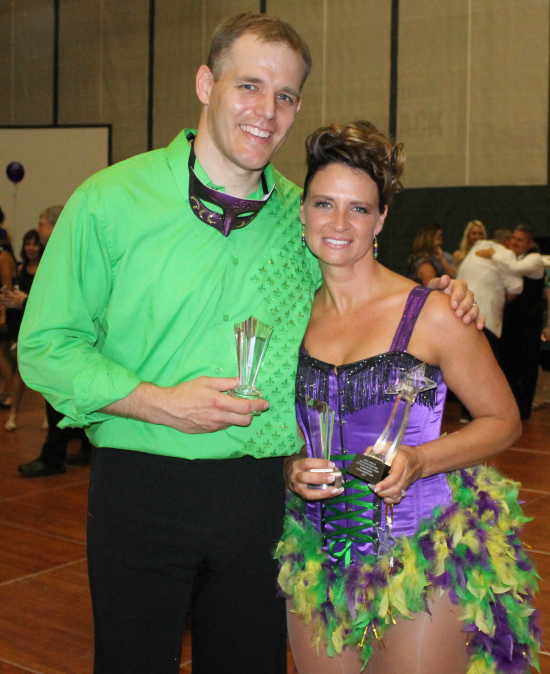 Although Jill Albers' sultry New Orleans-themed samba with dancing pro partner Logan Kuhne was good enough for runner-up Saturday night at Dancing with the Putnam County Stars, it was easily the second-most impressive part of Albers' participation. The North Putnam sixth-grade instructional aide and co-owner of Concepts: The Cabinet Shop raised $15,909 for the Putnam County Youth Development Commission through her participation in the event.
Banner Graphic/JARED JERNAGAN
Order this photo

Even though the dancing is the focus of the competition, the underlying cause of supporting PCYDC is always the most important aspect.

One dancer who clearly recognized that is Albers, bringing in nearly $16,000 for the commission, breaking Julie Thompson’s record of more than $13,000, set last year.

Perhaps it shouldn’t be surprising that a teacher’s aide and volunteer swimming and diving coach at North Putnam had a passion for raising money for the youth of the county.

Asked her secret, Albers couldn’t even remember all of her tireless efforts.

“I did quite a few fundraisers. I did a wine and canvas party. I did a chicken noodle dinner. What else did I do? Oh, gosh, I can’t even remember,” she said. “A lot of letters sent out to people — a lot of friends, family. My husband bought two tables, which definitely helped.

“Just getting out there and talking to people.”

And while fundraising was job No. 1, the dancing didn’t suffer too much, as Albers and Kuhne took the runner-up prize with their New Orleans-themed samba.

“Jill is fantastic. She worked very hard for it and I’m proud of her,” Kuhne said. “From the beginning, she said, ‘I want to win this fundraising,’ and she worked hard for it. That’s the part she focused on, which is the more important of the two. She said, ‘I’d like to win,’ but she focused on the right thing.”

In topping the $10,000 mark, Clodfelter was also no slouch in her fundraising.

No one could have blamed her for slouching on the dance floor, though. It was revealed after she and Brad Sandy had danced that Clodfelter will be needing a hip replacement in a few weeks.

She could have limped away from the competition, but chose to stay the course.

A nurse practitioner by trade, Clodfelter gave her medical opinion following the competition.

“The hip was already destroyed, so it really doesn’t matter,” she said with a laugh.

She already knew she had hip problems, but found out the exact extent once she took up intensive dance training over the last four months.

“I have arthritis in my hips, so I went to get it injected so I could dance and it just continually got worse every time I danced, so there you go,” Clodfelter said. “I knew it was bad, but it got really bad.”

One thing the hip couldn’t hurt, though, was Clodfelter’s fundraising, which she said involved a grassroots effort on Facebook as well as a few big donors.

“I really appreciate it because it’s not about how well we dance or how good we look. It’s about raising money for the commission, so I was pleased,” she said.

While those involved in the competition are aware of Tara Gardner’s countless hours of dedication to Dancing with the Putnam County Stars over the last 10 years, her efforts remain under the radar to the general public.

While she gives credit (and rightly so) to the other dancing pros each year, it’s hard to imagine where she finds time to bring a new partner up to speed each spring as well as organizing, choreographing and directing the opening number for the competition.

On top of that, she still balances her duties as a wife and mom of three with operating Dance Workshop, including planning the studio’s 46th annual recital, set for 2 p.m. this Saturday at Cloverdale High School.

Through all of this, Gardner and her dance partner had never come out on top in the first nine years of the competition.

To be honest, they hadn’t even come all that close.

For that reason, getting a partner as expressive and adventurous as McFadden to win in the 10th year was a big deal for Gardner.

“I’ve never even gotten runner-up, so this is a big deal to me,” Gardner said. “It was awesome.”

Being co-champion didn’t put a damper on things, as Gardner only has good things to say about Bond.

“I’m so glad to share it with Sarah and her partner (Ranck),” Gardner said. “Sarah’s amazing. She’s such a beautiful soul. I love her.”