EDITOR’S NOTE: This is the second in a three-part series of columns examining baseball in Putnam County. The first part ran on May 29, covering some of the historical date on county teams. The final part will run on Wednesday, concerning steps being taken to improve play in the sport moving forward.

The 2018 high school baseball season was a tough one for Putnam County teams.

Some of the reasons behind the difficulties were detailed in the first part of this series:

• Baseball was very good overall this year both in the Western Indiana Conference and surrounding counties;

• Practices were severely limited due to the bad weather, and players going on spring break during the week before games started were unable to get much done;

• An absence of recent success may not make the sport as desirable to play as some others.

The county’s varsity coaches all know that everybody was affected by the weather, and the best way to make your sport more appealing is to have success.

Our teams play tough, competitive schedules in attempts to improve themselves. More than half of the victories accumulated by the four county teams this spring either came over each other or against lesser programs such as Eminence, Dugger Union, White River Valley or Turkey Run.

Greencastle, the county champions, lost 14 games this season by the 10-run rule — including a stretch of five straight.

While all of our teams could have used improvement in all facets of the game, defense is the one category that seemed to cause the most problems.

Complete stats were not available for all teams, and attempts will be made to not embarrass any certain schools or players. But the numbers are pretty convincing.

One team made 88 errors that led to 98 unearned runs for the opponents. Another team committed 102 errors in 527 total chances for a fielding percentage of .806. As a result, more than half of the runs that team allowed all season long were unearned.

Greencastle had a game which epitomized the importance of defense better than any other.

The Cubs lost 10-0 to Northview in early May; no shame there, as the Knights threw their Division I pitcher (Braydon Tucker) and eventually finished runnerup in a Class 4A sectional.

The interesting thing about that game when I saw the results was that Northview scored six runs in the fourth inning and four more in the fourth. Yet only one of those 10 runs was earned.

Meaning? It seems that making as little as two fewer fielding or throwing errors could have put the Cubs right in the game.

To me, the aspect of weather contributed heavily to this problem — but, again, that’s everyone’s problem.

Through my many varied experiences with kids over the past several decades, the desire of kids to practice things repetitively in order to master them has dwindled as time has gone by. Playing a video game and you lose too many points or “men” early in the game? Just hit the reset button and start over. Much easier.

There is no such button in baseball, however. I truly have no way to determine how many of today’s high school players suffer from this malady, but if there were a way to tell I’m guessing it would be a high number.

A good start would be more dads and kids on practice fields bonding with a whole bunch of grounders and accurate throws. Over and over.

“We’re not leaving until you field 20 grounders in an row without missing one.”

Stuff that the dads of people my age used to do, and from what I gather doesn’t happen as much any more.

High school coaches sadly don’t have enough time to just repetitively hit grounders and work on making accurate throws. (Adding that to the list of other things that get shortchanged, like pitchers making pickoff throws to first and successful sacrifice bunting.)

Some eight-year-olds may already have a goal of playing high school baseball someday, but it’s understandable that they all may not know what they want to do in 10 years in terms of sports. 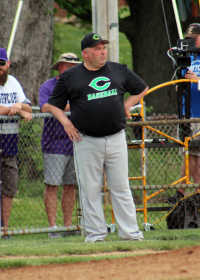 But that’s OK. I would think the goal of a parent/step-parent who enrolls a child in any sport would be to work with a child enough to help him/her to be at least competitive enough to have fun and have some success.

Not to win titles or trophies (that’s a whole different column), but just to leave a game able to take away some good points. For a lot of kids, the “walk of shame” back to the dugout after a strikeout is embarrassing, as is everyone looking at you when you missed a grounder or fly ball.

And if you’re not a “baseball” guy? You probably know someone who is, or your high school coach could help you to locate someone to help out.

If you’re a high school kid, and you don’t play on a travel team, you can’t just put your glove in the closet now that the season is over and then go digging for it in March when practice starts again. Work hard to make yourself better, and your baseball experience will get better at the same rate.

Are travel teams the answer?

One county team had several players to play on travel teams for the past few years.

Playing against elite teams from around the state, region and maybe even the nation seems like a good thing.

It is, in some ways.

“All of our kids who played on travel teams were not able to play the positions they were going to play for us,” one varsity coach said. “This year, all of them played new positions for us. One guy played for a team that had eight pitchers from all over the state, and he had no chance to get to pitch. His travel team used him in the outfield, and for us he needed to be an infielder and a pitcher. There is a whole learning curve when you play a new position, especially if you’re a 14-year-old freshman going to play against 17-and-18-year-old kids.”

It’s not just defense, though.

One team had a batting average of .177 and struck out in 37 percent of its official plate appearances.

Pitching seems to be one of the stronger areas, but is obviously not helped much by defenses. One problem, that isn’t easily fixable, is that the county doesn’t have a lot of high-strikeout pitchers. The fewer batted balls in play with strikeout pitchers, the fewer possible errors — at least until the overall defensive skill set improves.

One parent said when the better players leave a local recreational league that the team dynamic is lost by the time the kids get to the high school level.

“I was talking with some of our coaches the other day, and when we grew up everybody played on the same team coming up the line. You knew everybody’s strengths and weaknesses. Now, when people leave and go to travel teams, that takes away that team unity.”

I didn’t have endless hours to devote to researching this topic, but I did pop into Big Walnut Sports Park in Greencastle to watch a youth league game.

The game I watched was totally random in nature, and I believe involved Greencastle and Monrovia. The players appeared to be 12 or 13 years old or so.

Not knowing what to expect, I was pleasantly surprised with what I saw. Ironically, I thought the strengths and weaknesses of the teams in that game were very similar to my general summary of our county’s high school teams.

The hitting was pretty good, the pitching was solid and the defense was by far the third-best phase of the game.

Knowledge of the game

All high school players — whether on our teams or teams in other counties — could stand to have a better working knowledge of the rules and strategies of the game.

It’s frustrating to see a runner on second with less than two outs to take off for third on a sharp grounder to shortstop, and get thrown out at third by a mile.

Basically, kids know the game well enough at a thinking level to be able to play, but — besides talent — the teams that are traditionally the best are the ones who know the game inside and out.

I asked one coach if his players would pass a test question on the reason behind the infield fly rule. He chuckled and said, “No way.”

I would be surprised if many kids know how to keep a baseball scorebook, and when their coaches say they need to get a “6-4-3 double play” if they actually know what those numbers mean.

This isn’t being cruel; I just don’t think baseball is being learned as well as it did in the past. When I was growing up, we looked forward to seeing who was going to be on the Saturday “Game of the Week” because there weren’t a flood of games on like today. Kids may watch games on TV nowadays, but if they have headphones on while playing on their phones they aren’t going to pick up on the nuances of the game.

You may not like all baseball announcers, and some of them are annoying, but they all do a great job of explaining what’s going on. Things like why an outfielder intentionally drops a foul pop fly late in the game with a runner on third, so the guy can’t tag up and score.

If you’re a player, or the parent/step-parent of a player, you might not be able to easily fix all of the problems wrong with your game or your team, but taking more steps to learn the rules and strategies — as well as fielding practice grounders and making good throws — will go a long way.

Regardless of your age.