Less than two weeks after graduating from Greencastle High School, Simon A. Foss has been named a college-sponsored 2018 National Merit Scholarship winner. 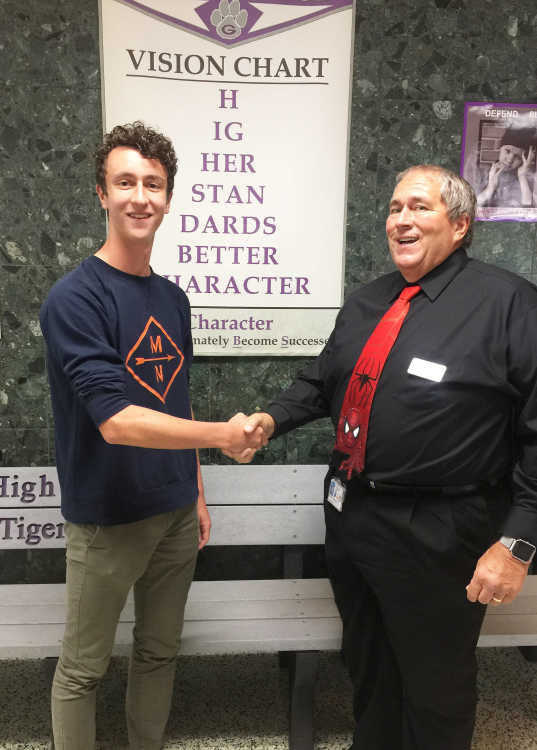 National Merit Scholarship winner Simon Foss (left) is congratulated by then-Greencastle High School Principal Russ Hesler after his selection last fall as a 2018 National Merit semifinalist. Foss was the only Putnam County senior to earn semifinalist status in the 2018 competition.

The 18-year-old son of Rebecca Schindler and Pedar Foss of Greencastle, who was the salutatorian at the recent GHS commencement, is not only obviously gifted academically but excels in music, sports and academic competitions as well.

Foss, who captained the GHS Math team to its first state championship in 20 years at last month's Indiana Academic Super Bowl, was also a member of this year's state champion English team as well as the third-place GHS Interdisciplinary squad.

In sports, he was all-conference captain of the GHS boys' soccer team during its 2017 conference and sectional-winning season.

And if that's not enough, he is a black belt in kenpo goju-ryu karate at Steve St. Pierre's All-American Karate Academy in Greencastle and is fluent in Italian.

Not only is Foss the lone Putnam County National Merit Scholarship winner for 2018, but he was the county's only semifinalist in the prestigious competition.

In attending the University of Chicago and its small, private, coeducational 165-acre residential campus, Foss is headed for an institution that has an international reputation for distinction. The college offers liberal arts training in more than 60 areas with 3,100 students enrolled and about 3,000 in seven graduate professional schools. Since 1892, Chicago has drawn gifted students from around the world to campus with its extensive library and research facilities.

This year, 178 higher education institutions are underwriting Merit Scholarship awards through the program. Sponsor colleges and universities include 100 private and 78 public institutions located in 44 states and the District of Columbia.

Additional recipients of college-sponsored awards will be announced on July 16. By the conclusion of this year's competition, about 7,500 academic champions will have won National Merit Scholarships worth more than $31 million.

More than 1.6 million juniors in some 22,000 high schools entered the 2018 National Merit program in taking the 2016 Preliminary SAT/National Merit Scholarship Qualifying Test (PSAT/NMSQT), which served as an initial screen of program entrants. Last fall, approximately 16,000 semifinalists were named on a state basis in numbers proportional to each state's percentage of the national total of graduating high school seniors.

Semifinalists like Foss were the highest-scoring program entrants in each state and represented less than one percent of the nation's seniors.

To compete for Merit Scholarship awards, semifinalists first had to advance to the finalist level of the competition by fulfilling additional requirements. Each semifinalist had to submit a detailed scholarship application and write an essay.

Semifinalists also had to have an outstanding academic record, be endorsed and recommended by a high school official, and earn SAT scores that confirmed the qualifying test performance. From the semifinalist group, some 15,000 met requirements for finalist standing, and about half of the finalists will be Merit Scholarship winners in 2018.

NMSC, a not-for-profit corporation that operates without government assistance, was established in 1955 to conduct the National Merit Scholarship Program. The majority of scholarships provided each year are made possible by the support of approximately 410 independent corporate and college sponsors.