Dancers bring in more than $60,000 to assist PCYDC 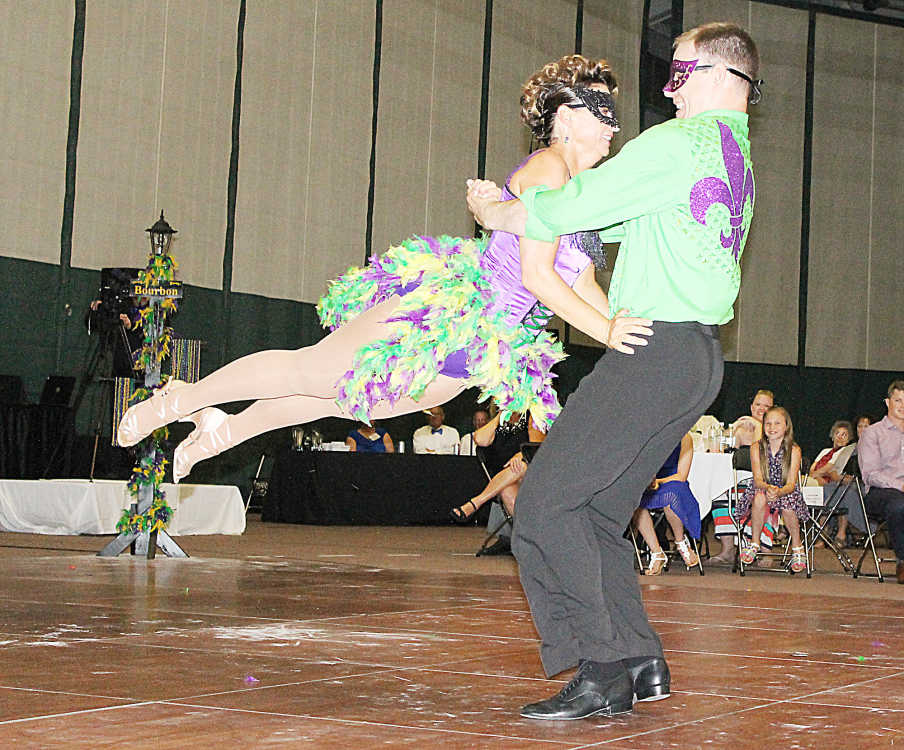 Banner Graphic/Jared Jernagan In an event that raised more than $60,000 for the Putnam County Youth Development Commission, Jill Albers was the top fundraiser of Dancing with the Putnam County Stars 2018 by bringing in $15,909. She and partner Logan Kuhne also found time to put together the runner-up performance in the dance competition with their New Oreans-themed samba.
Banner Graphic/Jared Jernagan

The dancing is certainly a lot of fun and it was exciting when Andrew Ranck and DuJuan Presley-McFadden were named co-champions of the 2018 Dancing with the Putnam County Stars event.

However, the true meaning of the annual event has always been raising money for the Putnam County Youth Development Commission, and the 2018 event was also a success on that front.

While exact totals are not yet available, PCYDC Director Linda Merkel confirmed on Monday that the 10th annual event brought in more than $60,000 for the commission.

“It’s hard to believe after 10 years that our community continues to embrace something,” Merkel said, “but I believe in my heart that they know the importance of what we’re doing and that their support can help us provide service, programs and initiatives to so many families in need in our community.”

The event serves as the chief annual fundraiser for the PCYDC so that it can continue to enable youths to participate and contribute to their community in positive ways through programs such as CASA (Court-Appointed Special Advocates), Choices, Coats for Kids, National Night Out, Putnam County Teen Court and school-based Teen Court.

Leading the charge in the fundraising effort was Jill Albers, who finished runner-up in the dance competition but made fundraising her first priority for the last several months.

Additionally, Cathy Clodfelter finished second in fundraising with an impressive total of $10,027.

Looking back on 10 years of the fundraiser, Merkel is a little surprised to still see it going strong. She credits the original idea to Brandon Halleck, a Putnam County native and dancing professional who first introduced Merkel and CASA Director Patti Harmless to the idea of the event through a Vigo County event.

“I thank Brandon, above all, as it was because of Brandon Halleck that we started our Dancing with the Stars,” Merkel said. “And when we first started we said probably five years would be our goal. But here we are 10 years later and we’re still going strong.”

Merkel also gave high praise to DePauw University for hosting the event at its indoor tennis and track facility. The event has been at four different venues over its 10 years, but the majority have been at DePauw.

“This is our first year back to DePauw after quite a few years. It’s been a great experience,” Merkel said Saturday following the competition. “It’s been very positive and tonight I thought was outstanding. I thought crowd participation was good. I thought our dancers were really, really fabulous tonight. I think that was shown by us having a tie. They had worked very hard.

“We’re blessed and honored to have this event.”