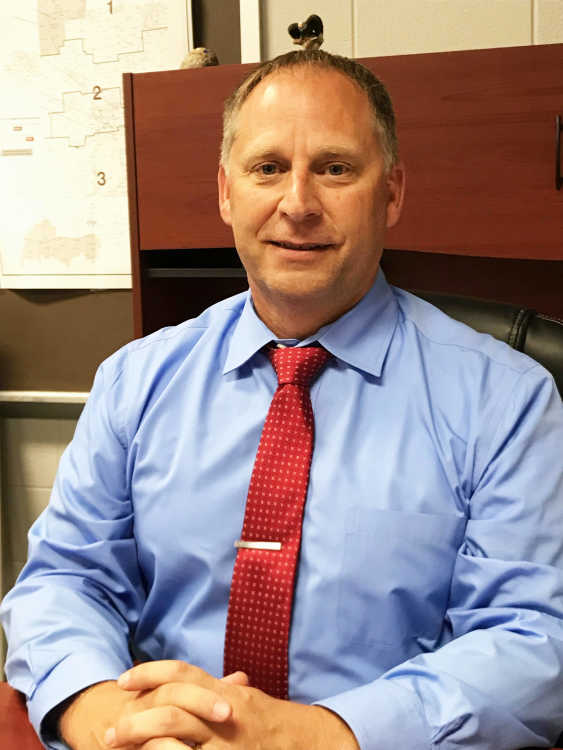 When Tom Starnes attended Avon High School in the early 1980s, the school campus was much different than the sprawling, college-type setting of today.

Before becoming a booming suburban community and increasing its enrollment exponentially, Avon was just a tiny little country school.

When Starnes was looking for a new job this spring after some reorganization in the Indianapolis Public Schools, his first trip to South Putnam reminded him of his own high school days.

“At that time, Avon was a very small school,” Starnes said on Monday. “I used to ride my bike three miles to football practice, and there weren’t any houses or other buildings around. Just cornfields.

“South Putnam is a very close-knit, small community,” he continued. “I love that. When I came here to do my first interview, I had a flashback — I loved my high school days. When I got here and met the people, I was really impressed and felt an immediate click with everyone I talked to.”

Starnes plans to commute from his Indianapolis home, a trip only 10 minutes longer than it is to his most recent position as athletic director at Indianapolis Tech.

Starnes started his teaching career at Broad Ripple High School in Indianapolis, a school that is now closed due to IPS school consolidations.

He taught both elementary and high school in the Broad Ripple system, and eventually became the varsity baseball coach before moving on to Tech.

“With the reorganization, the Indianapolis Public Schools changed their operations in terms of athletics,” Starnes said. “Another thing they did was to bring in an outside entity to revamp athletics within IPS. Instead of wanting educators with administrative licenses, they wanted people with sports management degrees.

“For me, that is getting away from ‘education-based athletics’.”

Starnes did not like that change of direction, and begin seeking other opportunities.

“Athletics need to be education-based, and that’s what it’s all about,” he said. “We’re all here for an education, and as much as I love athletics we’re secondary to the overall scheme of things in getting an education.”

Starnes is replacing Troy Burgess, who left South Putnam at the end of the recently-completed school year to become the head football coach at Evansville Central.

Starnes will be dealing with a radically different student population than the urban settings where he has been in Indianapolis, but doesn’t see any adjustment necessary in that area.

“The last 24 years I have related well to our inner-city youth,” Starnes said. “I was born in Reading, Pa., which is kind of inner-city.

Starnes knew he had found a place where he wanted to be this spring during a seemingly innocent-sounding evening while watching the Eagles play baseball during the course of his hiring process.

“I was at the baseball field, and I saw all the track team athletes come running by,” he said. “You don’t see that in Indianapolis too much. You don’t see them running around the schools, just because of where they are located.

“I got to see a team actually working toward something, and I was really floored by that,” he said. “There is always something going on here.”

The school won the girls’ basketball sectional title for the second straight year this winter, won its first-ever boys’ tennis sectional in the fall and was sectional runnerup in both softball and football.

Diver Lee Haywood qualified for the state finals as a freshman, marking the second straight year the Eagles had a state qualifier (following wrestler Kyle Shaffer in 2016-17).

South Putnam is in Class A for football and Class 2A for the other sports which are broken down by classification, but the school fields a team in every possible sanctioned sport with the exception of soccer and gymnastics — a larger offering than most schools of its size.

Starnes likes the fact that such a high percentage of the South Putnam student population is involved in athletics.

“That’s huge,” he said. “When you’re talking about percentage of student participation, that makes or breaks an athletic program. That really says something about your community and how much the kids want to better themselves through competition.”

Starnes said he could have returned to the classroom within IPS, but he likes being an athletic director. He was raised in an athletic family, as his father — Raymond — played minor-league baseball for several seasons in the Philadelphia Phillies’ organization.

“I really like the colleagues that I have in the world of athletics,” he said. “The Western Indiana Conference athletic directors now, and the ADs in the other conferences where I have worked, all share information between each other — good and bad. It’s like fraternity and we lean on each other.

“But in the end, it’s all about the kids,” Starnes added. “Our playing days are over, but we want to share what we have done in the past with our current athletes.”

Starnes does not officially join the South Putnam staff until the end of June, but is already on hand getting acquainted with his new surroundings while also helping tie up loose ends at Tech.

Like most new administrators, Starnes does not foresee making any major changes in his first year on the job — but just plans to learn current operating systems and make any changes he feels necessary as time goes by.

“The transition to a new school is always the toughest, when seeing how things are done there and how you are used to doing things,” he said. “Which way works better and most efficiently for this school?”

The increased use of technology is one of the main differences that Starnes has seen in the AD position over time.

“It’s very difficult to be ‘pen and paper’ any more,” he said. “Technology is being forced on you, whether it’s making up team schedules or hiring of officials. You have to be technologically savvy to be good at this job, and I’m learning.”

Starnes said he got an appreciation for the need to make changes from his son.

“I’m fortunate to have a 20-year-old son who’s home from college [at Indiana University], who told me I needed to ‘work smarter, not harder’,” he said. “I was always one of those guys who wrote everything down by hand, and I was kind of archaic. He’s gotten me into technology to see how that can help in our department.”

“We had VNN at Tech, and I love it,” he said. “Right now we’re having some issues connecting the Event Link software for schedules with it; we had Schedule Star at Tech, and it connected well with it. We’re still working out some bugs like that, and we’re going to hit that hard over the summer and the fall to get the most out of it we can.”

Starnes is entering the 12-school WIC at a time of transition, since Cascade will be leaving the league after the upcoming school year.

The Eagles are one of the smallest of the 11 remaining schools in terms of enrollment, with schools such as Northview having three times as many students.

“I know the dynamics of the WIC are not necessarily to our benefit,” he said. “For our location, it’s a good place to be. Cascade’s departure offers the league a chance to make some adjustments and possibly realign.”

Starnes has already attended WIC meetings, and notes the league is considering replacement schools for Cascade as well as modifying the current East-West divisional alignment.

“We don’t know right now,” he said. “I know with Northview in there we get beaten up quite a bit, but that just comes down to working a harder and being more committed. Maybe we can be a little cyclical and get some of our good years back, and improve upon what we’re doing now.

“I’ve been really impressed with every coach I’ve met and their work ethic. We just need to keep working hard.”