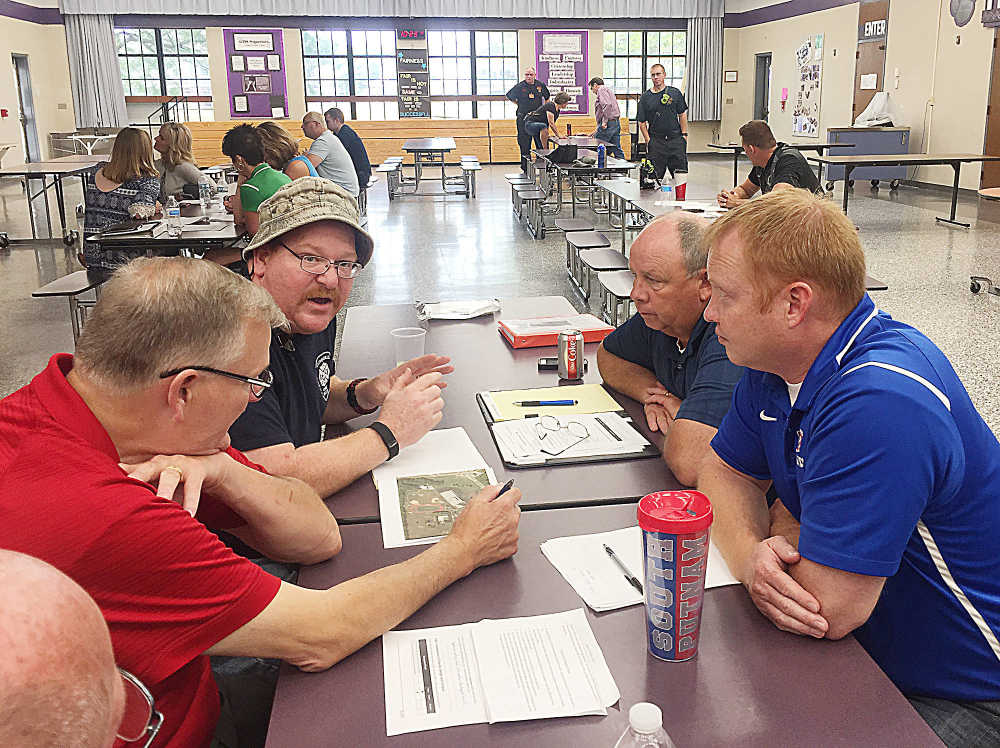 Emergency training is certainly familiar to both emergency responders as well as school officials.

However, conducting such training in conjunction has been less common in the past.

This fact made a recent functional exercise involving multiple local agencies and five school corporations a new and valuable step for those involved.

With details tailored to school building involved, each scenario was largely the same. Each involved a hazardous materials release during an active shooter event.

Each one also involved mass casualties, including the building principal.

“We wanted to throw you in the weeds and then drag you out of the weeds,” Putnam County 911 Director and Emergency Management Agency Deputy Director Dave Costin told the players following the exercises.

In the hot seat during each event were three people — a school administrator, a police officer and a firefighter. The idea was to bring people together from these disparate groups to help one another and to understand each other’s strengths and limitations.

“I appreciate that we could be in there to help you so you could help us,” North Putnam Director of Operation Terry Tippin said. “Us working as a team like this and having us practice with you was awesome.”

“It’s nice to know I didn’t always have to talk because of my two partners in there,” Hubble said.

The functional exercise, which involved radio communications but no one acting out the scenario, took less than 30 minutes per corporation. What impressed Greencastle Police Chief Tom Sutherlin, one of the evaluators of the scenario, was what happened afterward.

“After the scenario was over, the groups came in here and continued to talk about it for another 30 minutes or more,” Sutherlin said. “That was impressive that they didn’t come back and just say, ‘Whew! That’s over.’”

One of the school officials was also happy to see all of the corporations involved, as that also helped evaluate his own corporation

“It was nice to hear the other corporations respond,” Cloverdale High School Principal Sonny Stoltz said. “I got as much from listening to them as from our exercise.”

“I think we had some good discussions today,” Helmer said. “A couple of people said it was good training, but they’ve never been in this kind of situation before.”

Next year, the three-year cycle of emergency exercises will reach its culmination, from a tabletop exercise in 2017 to this year’s functional exercise to a full-scale exercise with actors for every role in 2019.