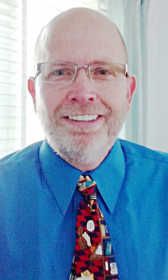 Brian Briscoe was unanimously approved by the PCPL Board of Trustees in its monthly meeting Wedensday night.

The decision was the culmination of a four-month process, after former director Grier Carson resigned to become the director of the Monroe County Public Library in Bloomington.

Judging from his background in publishing and library sciences, Briscoe comes to the post with a unique set of experiences.

He later earned his master’s degree in library science from Clarion University in Pennsylvania.

With that background in PR and library sciences, Briscoe was quick to provide that he had paid dues in a corporate environment before becoming involved in library administration.

“I had been in the corporate world, and when things didn’t work out, I was in libraries looking for employment,” Briscoe said. “That was when I really started to appreciate the purpose of libraries, and it was because of the resources that they provide.”

Briscoe soon began his career in libraries at the Free Library of Philadelphia, where he worked as a children’s librarian.

He also served as a branch manager in the middle of what he said was a rough neighborhood.

“As a branch manager, I was able to change some policies and market materials to see a huge jump in circulation at the branch.”

He also worked as a cataloger for the library, before he made a transition westward.

Briscoe was the catalog manager for the St. Charles City-County Library in St. Peters, Mo., which is west of St. Louis.

While there, he developed cataloging policy and trained a team to handle circulation demands. He saw the library grow as a member of its executive team, which oversaw its financial needs.

Before being tapped as the Putnam County Public Library’s director, Briscoe was the academic cataloging supervisor for Ingram Content Group in Fort Wayne.

His corporate experience came into play there, as he improved the output of a team that originally saw high turnover and poor performance.

While these acheivements and experiences lend to Briscoe’s leadership, it really is all about the people to him.

Indeed, he said that it was the community that solidifies his commitment to the task before him.

“It is a beautiful place,” Briscoe said, seeming to smile over the phone. “Greencastle is a small college town, but that allows for me to be able to be in touch with the people here.”

Briscoe is also optimistic that he can promote the library’s presence in the community, because he sees it as a good foundation to build upon.

“I hope to share the enthusiasm for the library with the people,” he said, harkening back to the time in his life when such a place gave him a new direction.

Briscoe also hopes that the library can have a positive involvement with local sports teams, which he will fully support.

“I am a fan of school sports, and it would be cool for the library to collaborate with and support these teams,” he said.

In conjunction with his efforts to be involved in the community as PCPL’s director, Briscoe says that his administrative experience will be an asset to the library.

“I’ve seen things that have worked (at other public libraries), and I want to see if those same programs can be done here,” Briscoe said.

Efficiency is a big part of his outlook in general. That will guide Briscoe with supervising administrative groups to meet the library’s needs.

Further, he believes that his contacts with library distributors, and his enthusiasm for meeting people, can facilitate circulation of books and other documents for the library’s patrons.

“What I want to do is reach out to people who might not use the library,” Briscoe said. “I want to encourage them to use it as a resource.”

At the end of the day, it is still about getting to know people, and seeing that the library is productive with them in mind.

“I believe that people are the greatest creation on this earth,” he provided. “In striving for improvement of any service, product or situation, the first consideration needs to be the people.”