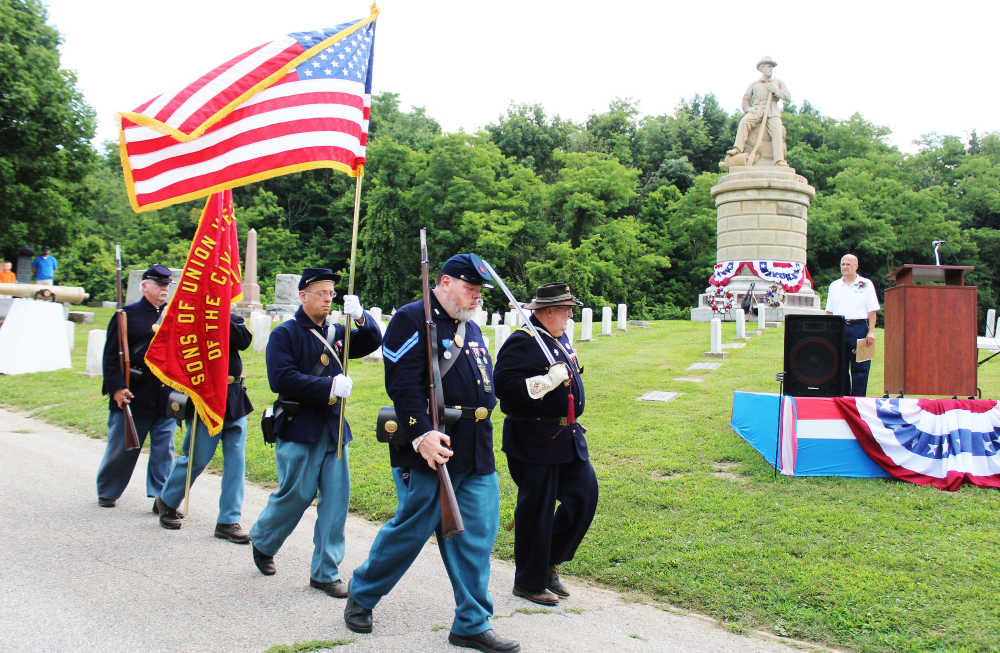 Members of the Sons of Union Veterans of the Civil War march in Sunday afternoon to present the colors and later conduct a rededication ceremony for the 1870 Civil War Monument at Forest Hill Cemetery. Heritage Preservation Society of Putnam County President Phil Gick waits at the podium, as the first of eight speakers, to welcome an estimated 100 persons to the ceremony that culminates a lengthy effort to restore the unique monument in the Greencastle cemetery.
Banner Graphic/Eric Bernsee

Despite 90-degree temperatures and a heat index in three digits, more than 100 people -- a little smaller than the estimated 8,000-person throng that descended on Greencastle for the original July 2, 1870 dedication -- witnessed the rededication of the Civil War Memorial in Greencastle’s Forest Hill Cemetery.

City, county, state and military officials addressed the crowd in a program organized by members of the Heritage Preservation Society (HPS) of Putnam County to commemorate the renovation of the 30-foot-tall Civil War monument that bears the names of 321 Putnam County soldiers killed during the War Between the States. The renovation took more than six years to accomplish.

“This has been a long time in coming, Phil,” Lt. Col. Jim Staggers, of Greencastle, the Indiana National Guard deputy chaplain, told HPS President Phil Gick during his turn at the podium. ”I remember being halfway around the world writing recommendation letters for you to get grants.” 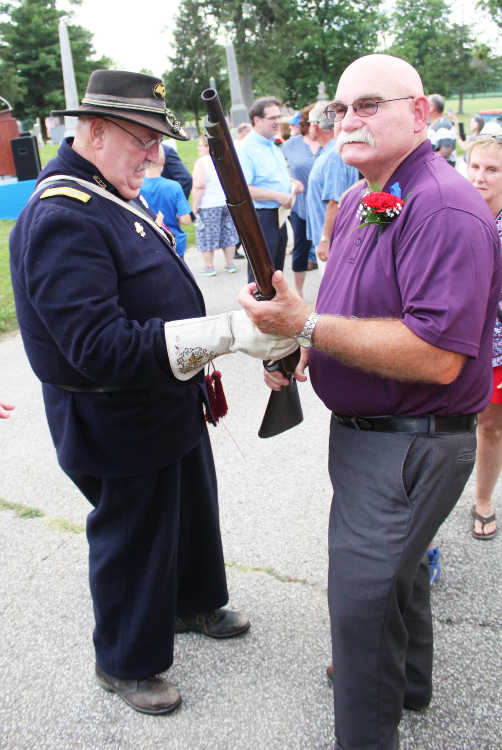 And grants they got, raising more than $100,000 through such funding sources as well as public and private donations to fund renovation of the Civil War Monument that was rededicated Sunday afternoon.

Staggers, who said he had family who fought in the Civil War, noted that although “in the grander scheme of things, we all know this (the monument) is just a piece of granite stone,” the people and the passion it honors, can “be our teachers” in cherishing freedom, patriotism and sacrifice.

As the group gathered to dedicate the memorial in honor of Greencastle’s Civil War volunteers, Staggers noted, “We remember ... with grateful hearts all those men of our community who in the day of decision were not wanting and gave their full devotion to preserve the freedom and liberties of our nation.”

Putnam County Commissioner David Berry stressed how much local involvement manifested itself in the call to arms from President Lincoln after Confederate forces fired on Ft. Sumter in South Carolina, starting the Civil War fireworks.

Ten days later the first Putnam County company, the Union Guards, left for Indianapolis to go fight for the Union as Company H of the 10th Regiment of Indiana volunteers.

“By the end of the war,” Berry said, “the men of Putnam County had served in 54 different units.

“And one unit, the 21st Regiment, First Heavy Artillery, has special meaning for me. My great-grandfather, Sergeant (his name, not his rank) McDonald Berry, served in Company E of this regiment in his first tour of duty. My great-grandfather was born and raised in Parke County but I think it is neat to discover he served with our Putnam County soldiers.”

Berry even ended up with the war veteran’s .58-caliber Enfield rifle used in battle, and he brought it to Forest Hill Sunday to share with interested folks after the program.

In researching further about the Putnam soldiers honored by the monument, Berry noted that James H. McGill was the first Putnam County casualty, dying at the Battle of Rich Mountain, Va.

Also, although Barton Mitchel was from Bloomington, he enlisted with the Putnam County troops, Berry related, and went on to play a significant role in the war.

A corporal in the 27th Regiment, Mitchel made one of the biggest discoveries of the conflict when he found Confederate Gen. Robert E. Lee’s plans for an invasion of Maryland wrapped around three cigars in a well-documented incident occurring Sept. 12, 1862.

Berry noted that the youngest Putnam casualty of the war was Samuel Swartz, who was killed at 15 years and nine months. He’s buried in the Putnamville Cemetery. Meanwhile, Putnam County’s oldest casualty was Joseph Ball at 41 years and three months. He is buried in the old city cemetery off Hanna Street by Blackstock Stadium.

“There are 321 names on the monument recognizing and honoring the men from our county who died,” Commissioner Berry said. “I discovered there are 58 Civil War veterans buried throughout Putnam County and 20 soldiers are buried in nine different national cemeteries.

“The most sobering information I found, however,” Berry added, “is there are 173 soldiers from Putnam County that are buried in unknown graves. Their names, their units and where they died are recorded but their burial places are unknown.”

It is important to remember, Berry said, the men “who came from all corners of Putnam County and the sacrifices they made and the price they paid.”

HPS President Gick, State Sen. Rodric Bray and Greencastle Mayor Bill Dory similarly addressed the community efforts to restore the monument and cement its link to the present and future.

In a community that remembers its war dead with the Doughboy statue, the Buzz Bomb and an obelisk on the courthouse lawn to honor, respectively, World War I, World War II and Korea/Vietnam veterans, the cemetery project also honors the community, Gick said.

“I’m trying to convey,” he added, “that this has been a community event that would not have been possible without the support of the community.”

Mayor Dory agreed, noting that the monument not only “captures the fervor of the Union victory,” but fills “the need to pay homage to those who lost their lives during the Civil War.”

Speaking of the partnership that created the monument in the first place, Mayor Dory said, he is “grateful today that the same spirit of partnership” exists and allows the city to complete projects like the monument restoration.

Sen. Bray, meanwhile, noted that if the creators of the memorial were still around, the renovation and community support that made it a reality would be “confirmation for them that their American dream is still alive.”

“I’m impressed by your efforts,” Bray told the community, noting that its citizens and organizations came “together to raise more than $100,000 from a multitude of sources, including your own pockets.”

DePauw University President Mark McCoy and Wayne L. Black, of the Adjutant General’s Office, also addressed the audience before members of the Sons of the Union Veterans of the Civil War, Indiana, conducted a rededication ceremony, firing three volleys, playing “Taps” and retiring the colors.

Department Commander Tim Beckman was the last to speak, noting that the Greencastle/Putnam County ceremony was occurring on the 155th anniversary of the beginning of the bloody Battle of Gettysburg while “many of our Civil War monuments have been neglected, vandalized or wrongly been removed from public view.”

“This memorial rededication,” Beckman continued in praise of the Putnam project, “assures us that our war dead are held in remembrance.”