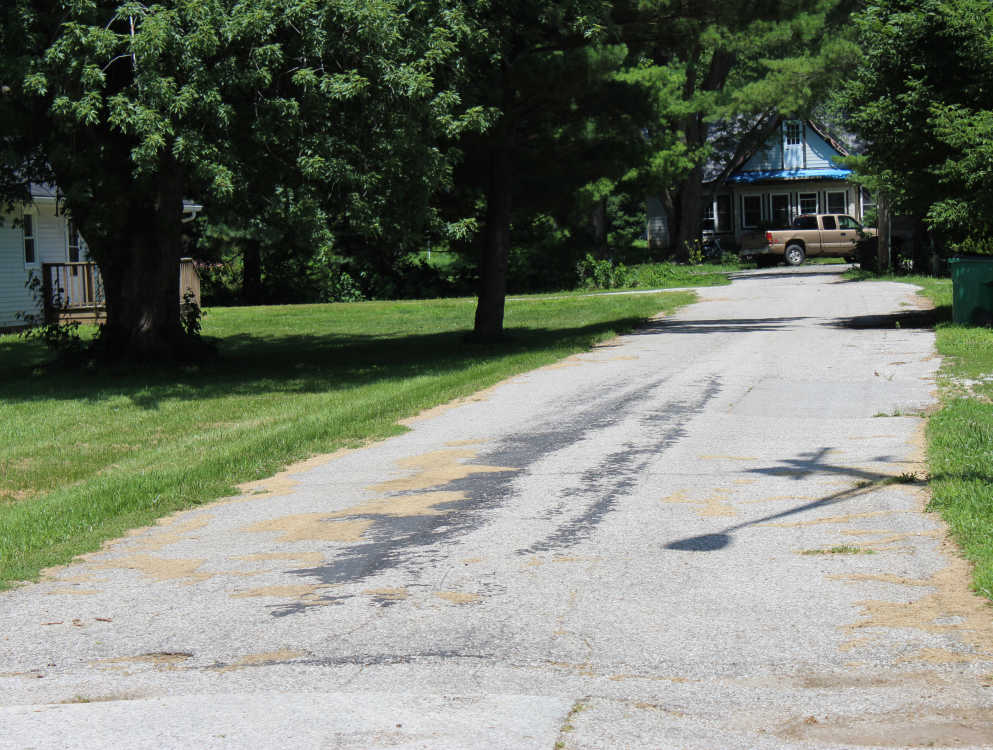 Viewed from the intersection with Hendricks Street, 1st Street is one of two streets Fillmore officials are hoping to resurface in 2019.
Banner Graphic/Brand Selvia

FILLMORE — In a move to make the town more appealing, Fillmore officials are optimistic that some of its roughest roads will get a makeover in the coming year.

The Fillmore Town Council took a major step at its monthly meeting on Thursday when it approved a pavement management plan to address needed road repairs.

The plan was prepared by Kieser Consulting Group, LLC, which assisted the town in assessing their road needs.

KCG owner David Kieser took a comparative approach when he presented the plan before the council.

The overall study of Fillmore’s roadways focused on three roads in the town needing the most attention.

The portion of Putnam Street from 1st Street to Westwood Road was considered to be in the worst state of disrepair.

Kieser advised that the financial expenditure necessary to totally reconstruct the three roadways would be about $337,000.

On the same token, the costs to mill and overlay them, meaning that existing surface would be ground up and replaced with new asphalt, would total $180,000.

In light of these steep commitments, Kieser said that it would be easier and more feasible to mill and overlay both 1st Street and North Street.

The approved plan will cost a total of $25,200, significantly less than what it would cost to mill and overlay Putnam Street on its own.

It was generally agreed that Putnam Street would best be repaired in stages, with the first potentially beginning in 2020.

These projects and others like them are dependent on grant support through the Community Crossings Program.

The matching grant would be divided 75 percent to 25 percent between the state and the town.

This means that Fillmore would have to pay $6,300 of the total project cost, while the grant would pick up the remaining $18,900.

Even though the town council approved the plan, it must follow an application process before it can procure funding.

The completed plan must be submitted to the state by Sept. 28 of this year

Town officials would know in November if the Indiana Department of Transportation (INDOT) has accepted the proposal.

Kieser believed that the proposed plan is one that both the state and the town would be able to work with.

“It is good to be fiscally responsible with these projects,” Kieser said. “And going ahead with these two roads is the best course at this point.”

As the pavement plan makes headway, the town council will also tackle its wastewater and stormwater management systems.

The council, with encouragement from Kieser, signaled that it would look into a master utility study granted through the Indiana Office of Community and Rural Affairs (OCRA).

The study itself would evaluate the town’s water systems and help determine what would need to be done.

However, acquiring the funds needed to address these water issues is more competitive.

“The town of Fillmore meets all of the requirements,” Kieser said. “But there are 16 other towns with the same kind of problems, so we have to make the best case as to why we need the money.”

Despite these challenges, Kieser said that his firm would be there to assist in the process, and that he was optimistic about where the projects would go.