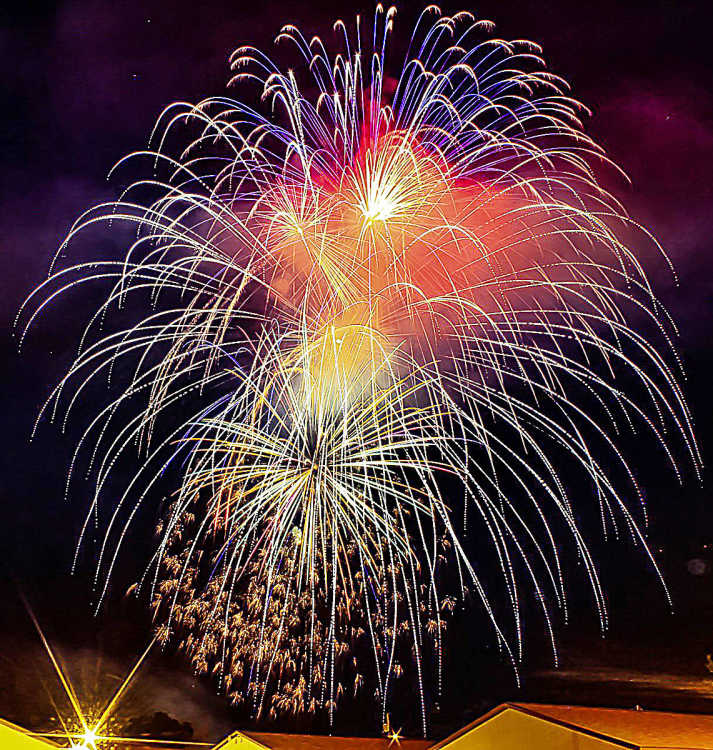 One year after getting peppered with negative comments following a presumed lackluster 2017 fireworks show and concern over a reported lost child before the program, there was nothing but good news for the Greencastle Park Board during its July monthly meeting Thursday night.

“I really haven’t heard any negative comments about anything,” Park Director Rod Weinschenk told the board less than 24 hours after a spectacular finale put an exclamation mark on the 25-minute annual fireworks show and Celebrate 4 festivities at Robe-Ann Park.

“Yes, it was hot and it was miserable but everyone seemed to have a great time,” Weinschenk added. “I think the heat (low 90s with a heat index of more than 100) kept the crowd down. We noticed that the crowd really didn’t come in until about 8:30.”

When the crowd did arrive, it was treated to music in the bandshell, which the city received permission to use since the concrete base and riser/steps are complete. Weinschenk had previously feared that the Department of Homeland Security wouldn’t allow the use of the bandshell since it was not completely finished.

“We got many comments on the bandshell,” the park director noted. “I told them, ‘Wait ‘til you see the finished product,’ and they all said, ’You mean it’s not finished yet?’”

The bandshell, which was used for the first time Tuesday night for the weekly ParkFest program, is still awaiting installation of the kiln-dried timbers that will create the limestone-and-wood motif symbolizing its covered bridge theme.

“At ParkFest the night before, they sounded amazing,” Park Board member Cathy Merrell said of performers Gus Moon, Chris Wurster and Brandon Tinkler. “I’m excited about what’s yet to come.”

Meanwhile, an estimated 600 people took advantage of the free day July 4 at the aquatic center, Weinschenk reported, adding that the annual Mike Rokicki Memorial 5K Walk/Run drew 115 participants, the pancake breakfast was so successful it ran out of pancake batter at one juncture, and vendors enjoyed strong overall sales, with the one exception being the food wagon selling hot food on such a warm night.

Overall, Mayor Bill Dory reported, there were few issues on the day with only two minor runs by Operation Life ambulance noted.

“All in all it went real well,” Dory said. “Hopefully the community enjoyed it and we can look forward to praying for good weather again for next year.”

-- Gave Tamara Richardson permission to pass out flyers through the SPARK program for the upcoming July 21 Food, Not Bombs free meal effort. Her group, Putnam County Greater Good, has rented out Shelterhouse No. 2 (next to the skatepark) for the event.

-- Approved use of the park for an Aug. 11 Triathlon fundraiser for the Girls Youth Softball program as requested by Becky Huntsinger. The pool has already been reserved for the swimming portion of the event, which will be followed by biking to Big Walnut Sports Park and back and then a 5K run along the Rokicki 5K route from Robe-Ann Park through the DePauw University campus and back to the park. Registration will begin at 7 a.m. with the event from 8-11 a.m.

-- Heard Troop 99 Eagle Scout Andrew Fajt update the board on his Albin Pond Road bat house effort, his Eagle Scout project along the People Pathway that he started in June 2017 as a natural mosquito control.

-- Heard Weinschenk report that the pool has been inspected twice this season and “passed with flying colors.” The concession stand was also inspected and passed, he said.

-- Heard Wenschenk note that the SPARK program is averaging about 135 youngsters per day with 232 participants registered for the Monday-Wednesday-Friday program. A total of 1,733 youngsters have been served by SPARK to date this year, he said.

The Park Board will next meeting in regular session at 7:30 p.m. Thursday, Aug. 2 at City Hall.