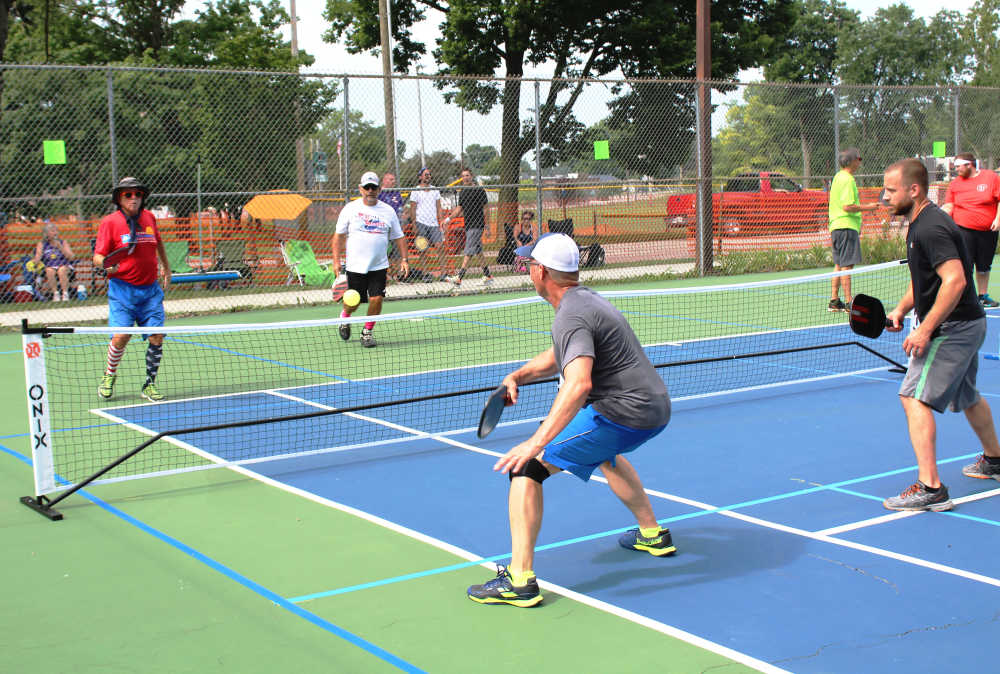 Poised to return a serve, Michael Harris (left) swats the pickleball back across the net during Fourth of July tournament action at Robe-Ann Park in Greencastle. Harris and partner Isaac Case (right) eliminated Mike Funk (back left) and Mark Voll of Plainfield and went on to win the men’s doubles portion of the event.
Banner Graphic/Eric Bernsee

With pickleball already considered the fastest-growing sport in the United States and its followers some nine million strong, it’s little wonder the boom has enveloped the Greencastle club and the courts at Robe-Ann Park.

A prime example of how the sport is exploding locally was Wednesday’s Fourth of July pickleball tournament, which drew 24 teams to the local courts, including two-player units from Indianapolis, Brownsburg, Terre Haute, Plainfield and other locales. Last year the same tourney produced just five entries.

Locally the pickleball club has grown from about 15-20 regulars to more than 50 who have gotten involved and are learning about the sport. Exposure at the June First Friday event provided a lot of interest and even generated several new members.

With that success in hand and envisioning even bigger and better things to come, Michael Harris, president of the Putnam Pickleball Players, and Jacob O’Rourke called on the Greencastle Park Board Thursday night to request additional space for their sport.

Their goal, Harris said, is to host an open tournament for the state of Indiana and perhaps adjoining areas like Kentucky and Ohio.

The courts were officially opened July 4, 2016.

“The Park Board made the somewhat risky decision to put those in,” Harris said, “and it’s been rewarded. People really enjoy it, and we had a number of nice comments Wednesday about what a great facility we have.

“Any Sunday night our courts are full and packed out.”

Expansion of the current facilities, Harris and O’Rourke noted, would not only benefit the pickleball people but the community as well.

“We would have more courts than anyone in Indiana,” Harris said, if additional tennis courts could be converted either permanently or on a temporary basis by adding additional permanent lines to the courts.

The pickleball enthusiasts explained how Terre Haute has been able to bring in hundreds of people for tournaments, which helps the local economy and exposes more people to the community as well.

Such a tournament can generate $3,000 or more for the club and the park, they said.

“Imagine bringing in 100 or 150 teams for a weekend,” O’Rourke said of how that might impact places that sell gasoline or food or provide lodging. “That’s what we’re trying to do by getting more courts.”

Indoor courts are another thing. Harris said finding a spot for four indoor courts would be ideal.

“If the ‘Y’ is still being talked about,” he suggested, “we would love to be engaged in that sooner rather than later.”

The local club has used the DePauw indoor tennis and track facility at times, setting up temporary courts there to play in the winter or early spring. However, students have the priority, of course, which makes pickleball play irregular there.

The club has even set up two courts in the hangar at the Dixie Chopper Business Center at the Greencastle/Putnam County Airport.

“So it’s taken off,” Harris concluded, “to where we want to do tournaments.”

The Park Board, however, took no action on pickleball request.

“We’re not really sure what’s going on with the tennis courts,” Board President Tim Trigg said. “They do need to be repaired.”

Trigg asked that the pickleball club representatives return for more discussion at a later date once the tennis court issue is resolved.