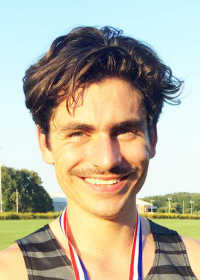 Polo Burguete of the men’s cross country and track and field teams and Sam McManus from the men’s swimming and diving squad have been selected DePauw’s top senior male student-athletes for 2017-18 by the University’s department of intercollegiate athletics as co-recipients of the Phil Eskew Award.

The Eskew Award is presented annually to a senior male student-athlete who best exemplifies effort and excellence in academics, athletics, leadership, integrity, dedication to the team, campus involvement and community service.

Burguete earned all-America honors at the 2018 NCAA Division III Track and Field Championships after finishing second in the 3,000-meter steeplechase and helping the team to its best finish ever at the Championships as the Tigers placed in a tie for 21st. 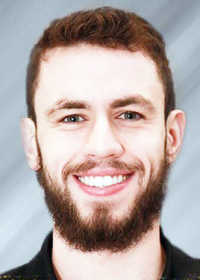 Earlier in the spring he set the school’s steeplechase record and was the Most Valuable Player of both the cross country and track teams.

He placed second at the 2017 NCAC Cross Country Championships to earn first team all-conference honors after garnering second team accolades in 2015 and 2016. A three-time all-region honoree in cross country, Burguete qualified for the 2016 NCAA Division III Championships as an individual and also competed in 2017 as the Tigers earned qualification as a team.

McManus finished his career as a four-time all-America honoree in addition to one honorable mention all-America accolade.

McManus majored in history with a minor in economics and served on DePauw’s Student-Athlete Advisory Committee as well as a Gobin Chapel intern. A member of the Phi Alpha Theta Honors Society, McManus studied abroad in Dublin, Ireland.

Emma Baldwin, of the softball team, was named the recipient of the Amy Hasbrook Award as the top senior female student-athlete.

Baldwin, a kinesiology major and studio art minor on the softball team, was also DePauw’s NCAA Woman of the Year nominee.

She earned a spot on the NCAC All-Tournament Team all four years including Most Valuable Player honors in 2015 and 2018.

Baldwin’s 20 career saves are a DePauw and NCAC record and rank in a tie for fifth in NCAA Division III history, while her 600 strikeouts are second in DePauw history and an NCAC record.