FILLMORE — An attempted traffic stop Wednesday evening resulted in a 12-mile pursuit — both on and off the road — of a stolen vehicle, the arrest of a passenger and three other occupants still at large.

At 9:37 p.m., Indiana State Trooper David Cox Jr., was on patrol east of Fillmore near County Road 750 East and 100 North when he noticed a 2014 Mazda traveling at high speed.

Cox activated his lights and siren, at which time the driver fled southbound on 775 East. The stolen car then proceeded westbound on State Road 240 and south on 725 East.

As the chase continued southbound, ISP Sgt. Cory Robinson, Trooper Austin Fowler and Indiana Conservation Officer Patrick Labhart intercepted the chase near County Road 450 South, causing the suspects to drive through a field before returning to 450 South. The chase continued on various county roads and along U.S. 40, before ending in wooded area behind the residence of 2835 S. CR 275 East.

All four occupants fled on foot into the woods. Cox and Labhart captured one female occupant.

An extensive search was conducted, but the other three suspects (two males and one female) remained at large as of Thursday morning. 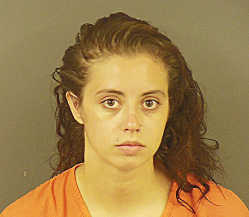 The arrested female was identified as 20-year-old Abigail S. Acton of Clayton. She was incarcerated in the Putnam County Jail on preliminary charges of resisting law enforcement and criminal trespass.

The Mazda was listed as stolen out of Morgan County and was processed for evidence by ISP Crime Scene Investigator Sgt. Jim Cody.

The ISP investigation continues into the identity of the driver and the other two occupants.