Her observation followed action by the Redevelopment Commission Tuesday evening to authorize expenditure of a maximum amount of $47,262 finalizing acquisition of right-of-way along Indianapolis Road between the easternmost entrance to Kroger and the stoplight by McDonald's at Percy Julian Drive/First Street. 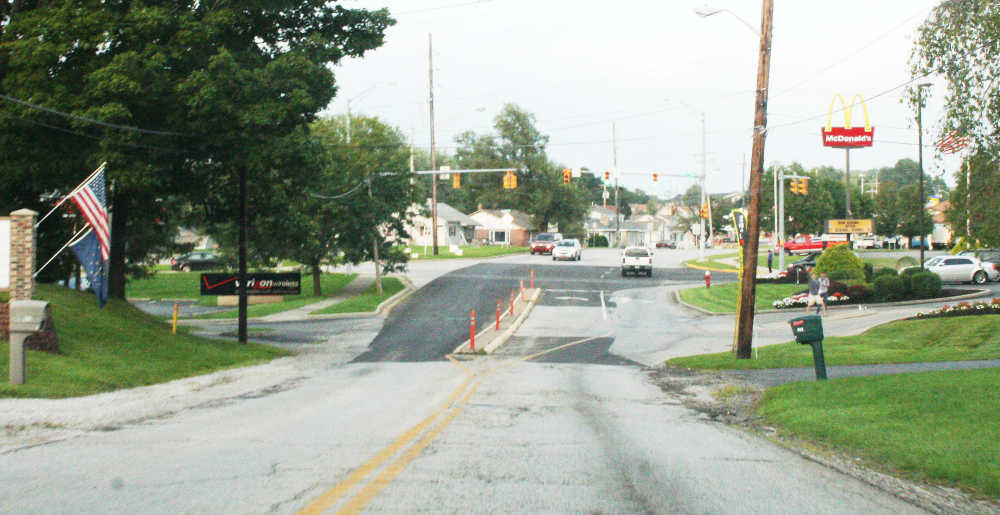 Looking east on Indianapolis Road in Greencastle shows part of the pavement area that will be widened and see sidewalks added to both sides of the road with an upcoming project undertaken this year and next. Banner Graphic/ERIC BERNSEE

In all, the city will be acquiring less than one acre of right-of-way as perpetual easements for the Indianapolis Road project (.918 acres to be exact) along with .675 acres of temporary easements during construction.

Half of the 20 necessary parcels are being donated by property owners, Hardwick said, adding that the city is taking the least amount of property possible from landowners in order to keep project costs down.

And in reality those figures have been reduced remarkably after original engineering estimates from more than 10 years ago pegged acquisition costs at about $1.5 million or more. Of course, that was for a much larger swath of property along Indianapolis Road to facilitate a project that will widen the roadway to three lanes and address drainage issues.

Feutz Construction of Paris, Ill., is the contractor on the project, having submitted the low bid at a total of $1,161,773, which includes sidewalks along both sides of the road (an alternate bid was solicited for sidewalks on just one side but will not be necessary because of the lower total bid price). Feutz Construction also did the work on Percy Julian Drive several years back, Mayor Bill Dory noted.

The project is being partially funded by the city's Community Crossings grant with the Redevelopment Commission providing the local match.

The largest amount being paid for land acquisition is $28,325 going to Sandor Development Corp., the Indianapolis company that put in the strip center immediately east of Kroger.

Because that land is commercial property, it comes at a higher cost, Hardwick explained.

It is necessary to go deeper into that parcel of land and secure more property there, she said, to help remedy drainage problems along Indianapolis Road, particularly in the ravine existing between the Sandor site and the adjacent Carkeek home to the east.

In previous discussions about the Indianapolis Road project, Mayor Dory called the ravine area west of Headley Hardware a "conundrum" as far as figuring out how to capture the stormwater without forcing it to run all the way to McDonald's where the infrastructure is apparently not sufficient enough to handle all of it.

Overall, the right-of-way acquisition phase has gone much easier than expected, the city attorney said.

"We're very grateful to those who donated their property," Hardwick told the Redevelopment Commission. "We appreciate how easy folks have been to work with, even those we've had to negotiate with."

Commission member Gary Lemon, who made the motion authorizing Hardwick to make the necessary expenditures to finish property acquisition for the project, asked if those who donated their land had been properly acknowledged.

"They've been personally thanked one on one," Mayor Dory noted.

A follow-up letter from the city is planned as well.

"That's great news," Hardwick said after the commission action approved the acquisition appraisals. She added that she hoped to have all the parcels done by the end of next week.

"The utilities are ready to move quickly," she said, alluding to utility lines that will need to be moved.

That could get the ball rolling on the long-awaited project.

"Optimistically we could see some construction this year," the city attorney said, indicating that could at least include removal of some trees from the right-of-way as well as the moving of utility lines.