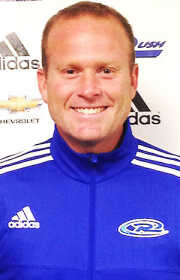 Since August 2017, the 1997 DePauw University graduate has been a coach and college adviser at the Challenge Soccer Club in Houston.

“Mark and I have been friends for nearly 10 years and he is someone that I have the utmost respect for as a father, man and coach,” UTSA women’s soccer head coach Derek Pittman said. “He was my first call when I started putting together my staff.

“Mark has nearly 20 years of experience at the college and club level, both as an assistant and a head coach, which will be invaluable as we build this team into a conference contender. He has strong recruiting ties to Texas and Midwest states that we will focus heavily on for our talent pool. He is also a tremendous teacher and communicates extremely well with his players.”

Hiemenz is the son of former Greencastle residents John and Joann Hiemenz. His father was plant manager at Greencastle Manufacturing in the late 1980s and early 1990s.

“I’m truly grateful for the opportunity Derek and UTSA have afforded me,” Hiemenz said. “I was excited to become a part of the Roadrunner athletic family and help pave a new path for the soccer program. I can’t wait to get to work.”

A communication major and English (literature) minor at DePauw, Hiemenz was a four-year starter on the Tiger men’s soccer team and competed in two NCAA Division III soccer championship tournaments. He also played in the Professional Development League for the Mid-Michigan Bucks.

Hiemenz began his coaching career as a DePauw assistant.

He spent the February 2016 through August 2017 as the director of coaching Colorado Rush Soccer Club, overseeing the senior division of the club and directing the College Advisory Program.

During the 2014 and 2015 seasons, Hiemenz was an assistant coach at the University of Wyoming, helping the Cowgirls amass a combined 23-15-5 overall record, including a 14-7-1 mark in Mountain West play.

He came to Wyoming after two seasons as head soccer coach at Hastings College in Hastings, Neb., where he compiled a 28-12-2 record. In 2012 Hiemenz was named the 2012 GPAC Coach of the Year after winning the regular-season title with a 9-0-1 record and advancing to the NAIA National Tournament.

Prior to Hastings, Hiemenz was an assistant for women’s soccer at Boise State. He assisted in day-to-day activities, including being the recruiting coordinator and goalkeeper coach. Boise State advanced to the Western Athletic Conference tournament semifinals or better each year Hiemenz was a part of the program.

Before coaching at Boise State, he was the head women’s soccer coach at Carroll College in Helena, Mont. Hiemenz recorded a 56-30-7 overall mark at Carroll and led the Fighting Saints to the school’s highest winning percentage and most wins in team history.

After graduating from DePauw and spending one season as an assistant with the Tigers, Hiemenz became an assistant coach for Gustavus Adolphus College in Minnesota. While there he helped the team become Minnesota Intercollegiate Athletic Conference Champions in 2000, a final NSCAA ranking of 10th and a Division III Tournament and Round of 16 appearance.