Kamfonas returns from Paris for Wednesday concert at Gobin 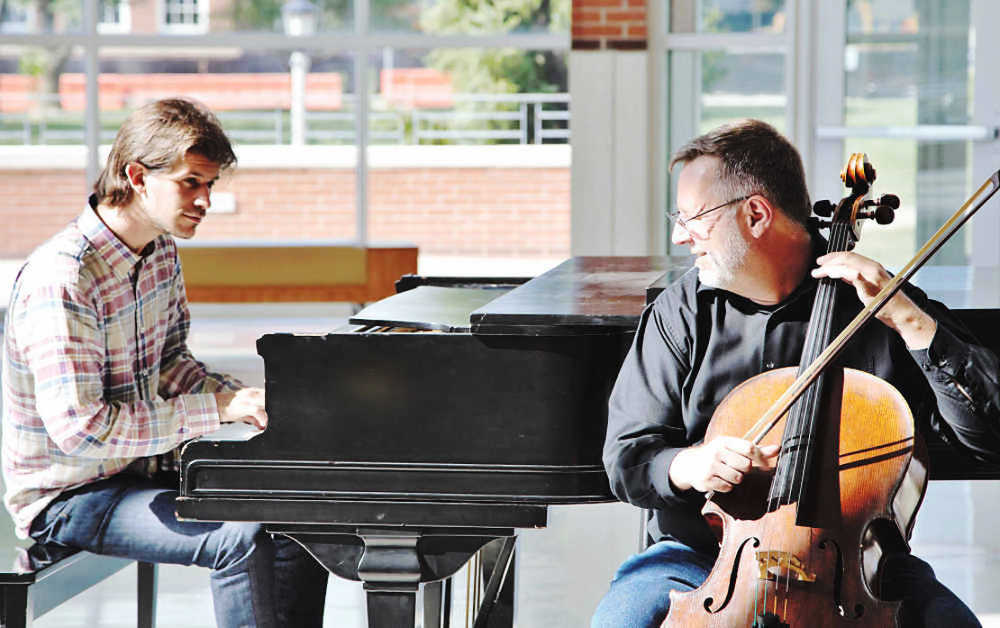 There is no admission charge for the 7:30 p.m. concert in the air-conditioned sanctuary of Gobin Memorial United Methodist Church.

The festival’s concerts are funded by the Inn at DePauw, an endowment at the Putnam County Community Foundation, and a wide array of local individuals and businesses.

Kamfonas and Edberg toured together this year in Arizona, Colorado, Indiana and France, where they performed two concerts in Paris and hosted an improvisation evening at a coffee house steps away from the iconic Notre Dame Cathedral.

Perhaps the only cello and piano duo that performs both classical compositions and free improvisations in concerts, Edberg and Kamfonas say they find the two approaches to music making enhance each other.

“Ultimately, music making is as much about relationship and chemistry as it is about the score one is bringing to life,” Edberg said. “When we improvise together, it’s all relationship, no score. John I and have a particularly strong connection when we improvise, and the awareness of, being present to, and trusting each other that make free improvisations work enhances they way we play composed music.

”Having now collaborated for years and toured together,” Edberg added, “John and I have become close friends as well as musical partners, so this week there’s no question that the performance is ‘friends making music for friends.’”

In addition to improvisations, Wednesday’s program includes a Suite for Piano and the Fantasy for Cello and Piano by the Armenian-American composer Alan Hovhaness, works which the duo are performing for the first time.

“During his visit to Greencastle, John and I are completing our project of recording the complete music for cello and piano by Hovhaness, whose music we have fallen in love with. We are balancing those pieces, and our improvisations, with the exciting sonata by Samuel Barber, which, along with different Hovhaness works, is on our first CD.”

Classical and improvising cellist Edberg is a concert organizer, workshop leader and drum circle facilitator committed to enlivening and connecting people through music, Edberg is the founder and artistic director of the Greencastle Summer Music Festival, which has “brought the community together with friends making music for friends” since 2005. Dedicated to music as a healing force and to bringing classical music “everywhere,” he has played in nursing homes, schools, hospitals, prisons and even the New York City subways.

Embracing his penchant for improvisation alongside his passion for the classical and contemporary repertoire, American pianist Kamfonas has given performances around the world, from New York to India, Paris to Beijing.

As one of few improvising classical pianists, Kamfonas performs music ranging from Bach and Beethoven to Debussy and Barber interwoven among spontaneously conceived improvisations. He gave his New York debut at Merkin Hall in 2012 and has performed in numerous summer festivals, including the Atlantic Music Festival (Maine), Aspen Music Festival, Beijing International Music Festival and Academy and the Greencastle Summer Music Festival.

As a devoted proponent of contemporary music, Kamfonas has performed and worked with world renowned composers of today, including George Tsontakis, Eric Ewazen and Alexandros Markeas among others. He also collaborated alongside various members of Yo-Yo Ma’s Silk Road Ensemble for a series of concerts at DePauw during the summer of 2017.

Kamfonas, who holds degrees from Columbia University, Manhattan School of Music and the Ecole Normale de Musique in Paris, currently resides in Paris as a resident musician and Harriet Hale Woolley Scholar at the Fondation des Etats-Unis, site of a recent solo recital part of which was broadcast nationally on France’s TV channel TF1 in 2016.

The Greencastle Summer Music Festival concludes next week with an Aug. 15 program featuring the music of Brahms and Schumann, performed by pianist May Phang, clarinetist Randy Salman and cellist Eric Edberg.