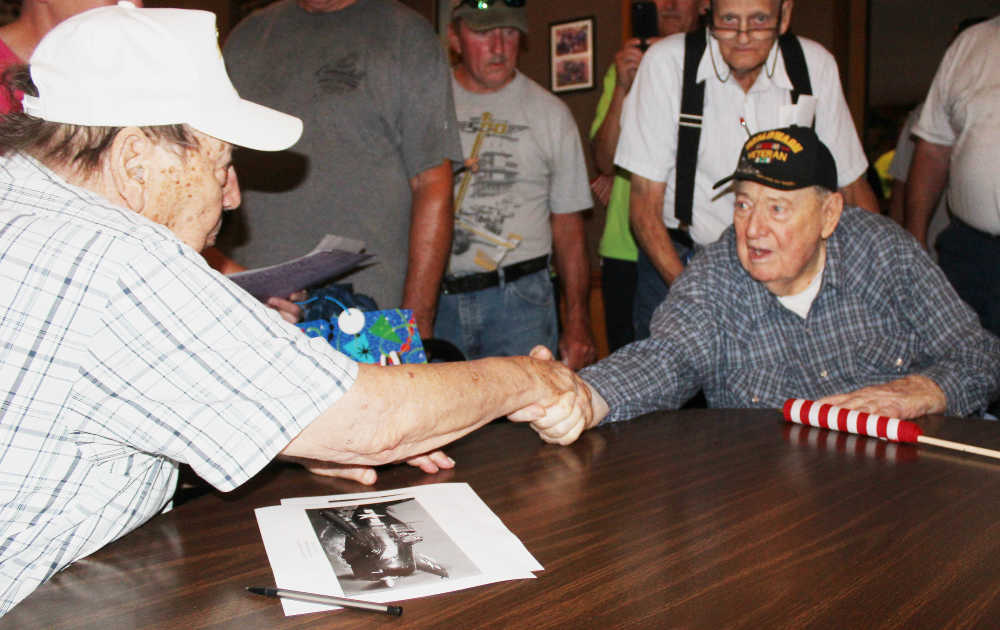 CLOVERDALE -- Accompanied by more than 125 motorcycles as he rolled into Cloverdale Friday night, nothing short of a hero’s welcome greeted 95-year-old U.S. Navy veteran Ray Kerr.

Everywhere he turned, people called him a hero, hoisted signs proclaiming him a hero and applauded his every step as Kerr wheeled into the American Legion Post 281, riding shotgun in a black Chevrolet Suburban with police cars, fire trucks and motorcycles along for the ride.

“I’m not a hero,” Kerr insisted as he held court at a table in the Legion hall, signing autographs, shaking hands and having his photo taken, mostly by people he had never laid eyes on before in his near-100 years of life on this earth. 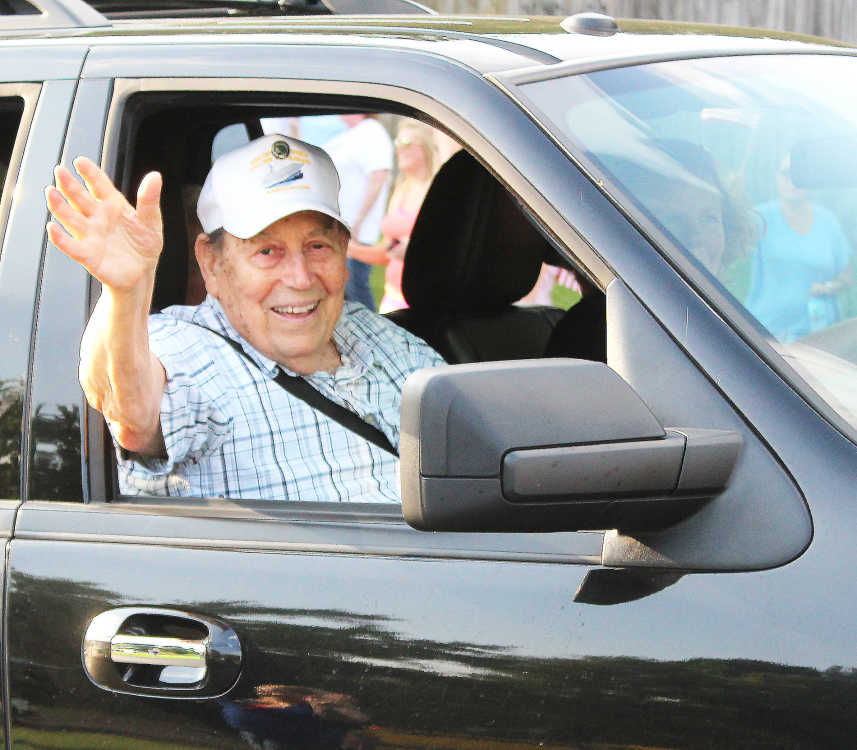 “Everyone who was in World War II was a hero,” assured Kerr, who grew up in Brazil, graduated from Brazil High School in 1941 and was returning to his hometown for a reunion at Forest Park later that evening.

“I used to ride motorcycles ... Harley-Davidsons,” he said whispering “That’s when I was 15.”

A couple years after that, Kerr was fighting for our freedom in the Pacific Theater, serving on the aircraft carrier USS Makin Island.

Flying mostly Navy Hellcats during the war, he said he shot down only one Japanese plane but was instrumental in providing countless cover for the U.S. Marines who had landed on the beach at Iwo Jima to ultimately win one of the most pivotal battles of the war.

“We saved hundreds of Marines’ lives there,” Kerr said, noting that his duty was to strafe enemy targets like supply depots, convoys, and trains carrying munitions and troopers.

Kerr said he was constantly shot at and often returned to the aircraft carrier with his plane riddled with bullet holes. But it never slowed him down.

That’s when he started greeting everyone with “It’s great to be alive,” he noted.

Kerr, who said he has been diagnosed with cancer but looks to be in good shape for someone 95 years old, said the visit was likely to be his last trip back to Indiana. He lives in Pennsylvania “but Indiana’s my home,” he said.

Admitting that he has no connection to Cloverdale, he said, “This is a good place, I’m proud to be here,” after witnessing dozens of town residents turned out along U.S. 231 to welcome his motorcade that began in front of a big crowd at the Harley-Davidson dealership in Plainfield and followed State Road 42 through Mooresville, Monrovia and Eminence in snaking its way into Putnam County.

Spotting a fellow veteran, Kerr smiled broadly and reached across the table to shake the hand of World War II Army veteran Louis Simmons, 94, of Cloverdale, who shared a war story or two.

Through it all, Kerr remained in awe.

“I’m still in shock they wanted to see an old Navy pilot like me,” Kerr said. “I’m so old I squeak.”