Mary Elizabeth (Lunny) Norton died peacefully at her residence at Brookdale Senior Living in Ithaca, N.Y., on Saturday, Aug. 11, 2018, one month before her 105th birthday.

She was born in Ann Arbor, Michigan, on Sept. 14, 1913, to two Irish immigrants, Richard Lunny and Jennie Stephenson, who met and married there 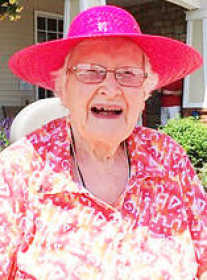 In her childhood, the family had few resources. Her mother took in boarders to make ends meet, and her father, injured in a fall, cultivated vegetables and berries that the young Mary peddled to neighbors.

A 1931 graduate of Ann Arbor High School, she was able to attend the University of Michigan during the Depression because she could live at home, earning first a B.A. in classics and history in 1935, then an M.A. in 1936.

She taught high school in Farmington, Mich., before her marriage to Clark Norton in 1940. Their honeymoon was the drive to his first job as a professor at the University of Montana in Missoula. In 1942 they returned to Ann Arbor when Clark joined the Political Science Department at Michigan, then moved to Greencastle, Ind., in 1948 when he accepted a professorship at DePauw University. In Greencastle, she was active in Gobin Memorial Methodist Church and in the League of Women Voters, among other organizations.

Her life changed dramatically when her husband became Indiana U.S. Sen. Birch Bayh's legislative assistant in 1964, and they moved to Bowie, Md. (Clark also later worked for the Senate Public Works Committee and the Congressional Research Service.) She had already begun teaching introductory Latin at DePauw, and she was hired as an instructor in the Classics Department at George Washington University. She held that position for the next two decades, teaching a variety of courses ranging from Latin language and literature to Classical Civilization and Women in Antiquity. During the summer of 1966 she held a Fulbright Fellowship at the American Academy in Rome.

Upon her retirement, she received the unusual honor of being recognized at a commencement ceremony. She was a member of the American Classical League, the Virgilian Society and the Washington Classical Society.

She and Clark traveled extensively, visiting many European countries, as well as China, Australia and New Zealand, until her health problems prevented further trips. Everywhere they went, they visited museums and archaeological sites. She had long used her personal slides in teaching; she gave them to the GW Classics Department, along with funding to cover digitization, and in recent years she was pleased to know that other professors were making use of the images in their courses.

She moved to Ithaca, N.Y., and to Brookdale, in February 2010, following the death of her husband the previous July. She was thrilled to be among those featured in the 2017 book, "We the Resilient: Wisdom for America from Women Born before Suffrage." And she took pride in being a centenarian, partially ascribing her longevity to her curiosity about "finding out what's going to happen tomorrow." She mastered a computer in her 90s and continued to email family and friends until a few months before her death.

She is survived by her daughter, Mary Beth, of Ithaca; her son, Clark, and his wife Catharine, of Tucson, Ariz.; her grandson, Grael, his wife, Nona Patrick, and her great-grandson, Conrad Patrick Norton, also of Tucson; and her granddaughter, Lia Norton, and her partner, Michael Livermore, of Charlottesville, Va.; as well as five nieces and their families.

She was predeceased by her sister, Martha Lunny Burbridge.

Her family thanks the devoted staff at Brookdale Senior Living for their attention to her, especially in the final weeks of her life.

Burial will be in Ludington, Mich., at a later date.