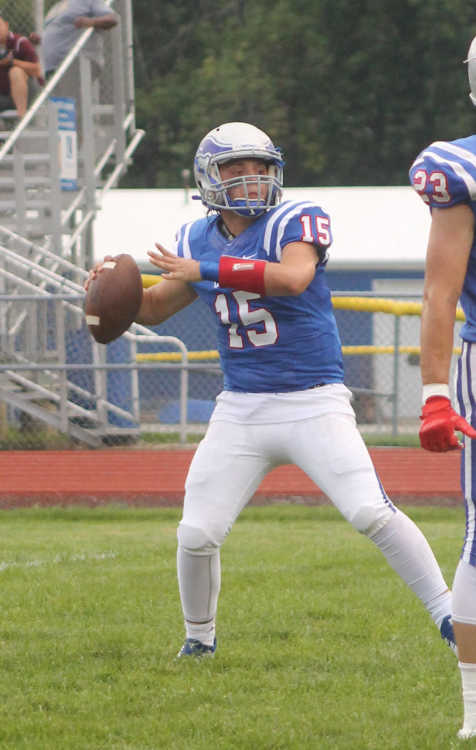 With the largest roster in the county at 52 members strong, South Putnam football is looking to get back on the winning track after two losing seasons in a row.

The Eagles had been above .500 for seven straight years, culminated by a sectional runnerup finish three years ago.

Last year, the young Eagles won just their season opener during the regular season while battling injuries at virtually every position.

They went on to win their first two games in the sectional before falling to Indianapolis Arlington for another sectional runnerup finish. 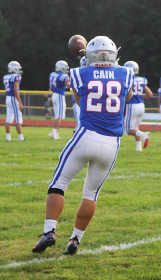 Connor Cain gets ready to haul in a pass.
Banner Graphic/JARED JERNAGAN
Order this photo

Coach Nathan Aker said this year’s seniors know how close they have come to winning a sectional, and look to get all the way over the hump this time around.

Several underclassmen had to play bigger roles than expected last season, but Aker is counting on that experience to be beneficial this season.

“We had a good off-season,” Aker said. “Most of our kids are doing two or three sports, which is what you want to see at South Putnam. Most of the kids are in weightlifting classes during the daytime in school, which is good.”

Junior Devin Cashion won the quarterback position with the graduation of Christian Zeffel, who now plays at Wabash. 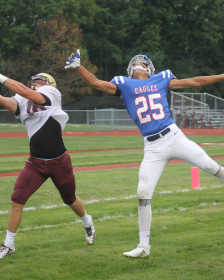 “Losing Christian was a big loss for us,” Aker said. “Devin came out on top of a battle we had for the position, and he had a great summer. He has worked hard.”

Seniors Aidan LeBlanc and Dalton Scott are back at tailback, and fullback, respectively.

LeBlanc carried for 576 yards and two scores last year, while Scott ran for 374 yards and had five touchdowns.

“Dalton is a force at fullback, and he’s chomping at the bit this year,” Aker said. “Aidan is healthy and is primed to have a good season as well.”

Noah Hatton and Layton Workman will provide depth in the backfield along with versatile Connor Cain.

Aker can count on a big list of receivers to contribute this season, including Hayden Switzer, Kain Gregory, Steven Schnepp while Drew Teipen and Jackson Wood will man the tight end spot.

“Tight end and fullback are very important positions in what we try to do,” Aker said.

On the defensive line, Scott was an all-state linebacker last year and will again be called upon to lead the defense.

Many of the offensive linemen will also do work on the defensive line.

LeBlanc returns at linebacker, while Cashion and Gregory return at safety.

Steven Schnepp and Matthew Goodpaster provide depth at safety, while Switzer, Cain, Gabe Langley and Garrison Bock will be at cornerback.

“We have some youth there, and also with good varsity experience,” Aker said. 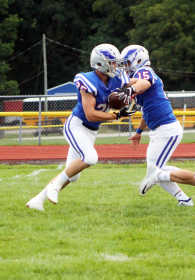 Aker feels this team is ahead of where it was last year, and depth concerns can be alleviated by the team’s largest player turnout since before Troy Burgess took over as head coach in the mid-2000s.

“Our seniors have mentioned getting that sectional title that has escaped them,” Aker said. “They have worked even harder to try to make that happen. We just need to keep focused on doing things right.”

Aker credits his team’s tough schedule with helping prepare for tournament play, such as last year.

The Class A Eagles scrimmaged against Indianapolis Lutheran, also in Class A, but won’t see another team in their enrollment classification until the state tournament.

“It’s a meat grinder,” Aker said of his schedule. “We have to make sure we are together and focused for tournament time. The county should be very competitive this year, and our half of the conference is also very strong.

“We are doing to try our best to compete with those teams.” 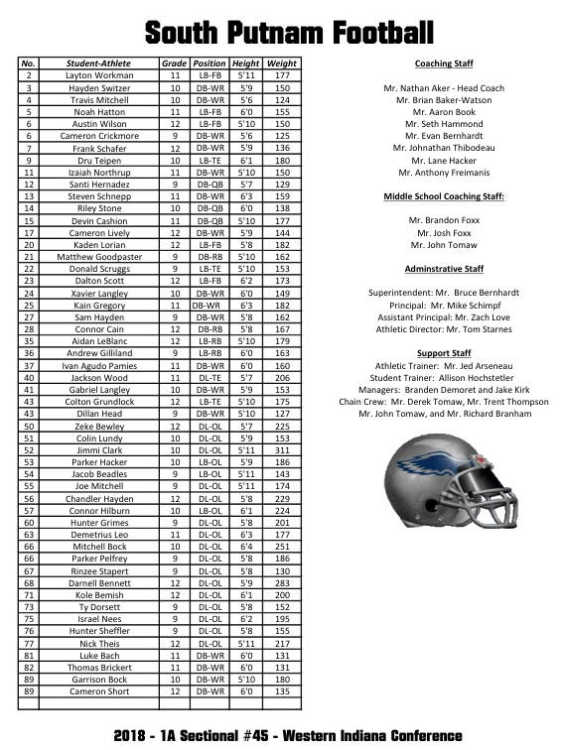