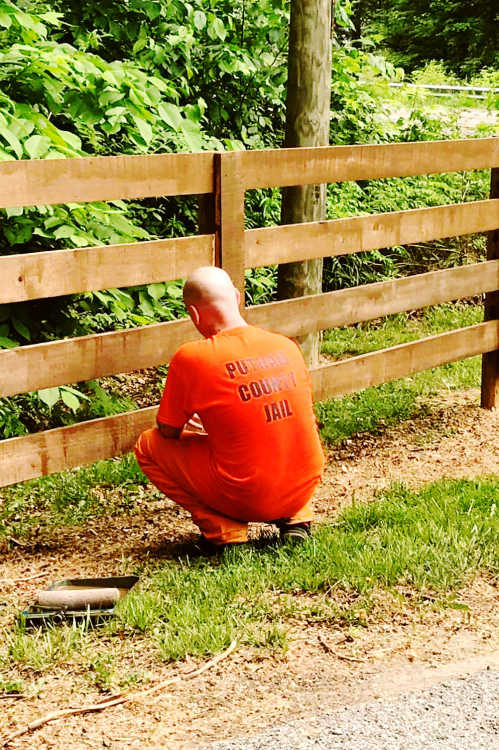 Local inmate workers seemed to “enjoy doing chores” at the nearby Indiana Sheriffs’ Youth Ranch and have asked to return for other one-day projects, Putnam County Sheriff Scott Stockton said of their recent efforts.

As a board member on the statewide not-for-profit camp under development in Clay County for future law enforcement officers and at-risk kids, Stockton helped coordinate a project to design, erect and stain the first phase of decorative and safety fencing at the Youth Ranch.

“Putnam County’s eight inmates selected for (the recent) project were all non-violent offenders and guarded by merit and reserve deputies from our department and neighboring Clay County, where the Youth Ranch is being developed,” Stockton noted.

“One inmate’s roller was applying the first coat before materials could even be distributed among the others. Despite the heat and humidity, I believe they applied three complete coats of stain.”

Much for the lumber for the fencing was provided by Pingleton Sawmill near Greencastle. Labor to design and erect the fence was donated by TJ Fencing of Center Point.

Other costs like posts, concrete and hardware were funded by Les and Anna Zimmerman of Clinton, who Vermillion County Sheriff Mike Phelps connected with Youth Ranch organizers.

“For 39 years, sheriffs and deputies have hosted Youth Leadership Camps for future deputies. In the late 1980s and early 1990s, as law enforcement focused more on crime prevention and community policing, an emphasis on at-risk kids was added,” Phelps said. “The Indiana Sheriffs’ Youth Ranch will be the permanent home for these camps, as well as weekend retreats for young witnesses, victims and survivors of crime – including sons and daughters of fallen officers.”

To donate, volunteer or learn more about the Youth Ranch, persons may call toll-free to 833-IN-RANCH or log onto www.SheriffsYouthRanch.org.