A Greencastle man is in jail following an early-morning Thursday crash in which his passenger reportedly suffered life-threatening injuries.

Around 1 a.m., Zakary A. Kortesmaki, 23, was westbound in the 7300 block of U.S. 36 in a 2004 Honda Accord when he attempted to pass another vehicle driven by Glen Bridgewaters of Clinton. 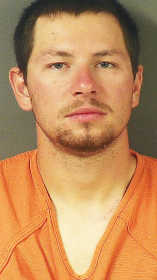 Kortesmaki told Putnam County Sheriff's Department Sgt. Kyle Gibbons he lost control of his car and it left the north side of the road.

The vehicle hit a fence and then a guardrail before flipping down an embankment and coming to rest on its top.

The vehicle was well off the roadway upon Gibbons' arrival.

While Kortesmaki escaped with only injuries to his hip and upper leg, his passenger, 26-year-old James L. Jones of Greencastle, suffered what Gibbons described as life-threatening head injuries.

Both men were transported from the scene by Operation Life ambulance.

Kortesmaki tested at .16 percent blood-alcohol content on a portable breath test, followed by a certified test in which he tested at .20 percent.

He was later booked in the Putnam County Jail at 4:33 a.m. on preliminary felony charges of causing serious bodily injury when driving a vehicle with a BAC of .08 or more and driving while intoxicated with a prior conviction.

Besides filing the new charges against Kortesmaki, the Putnam County Prosecutor's Office filed a petition to revoke his probation in the prior conviction.