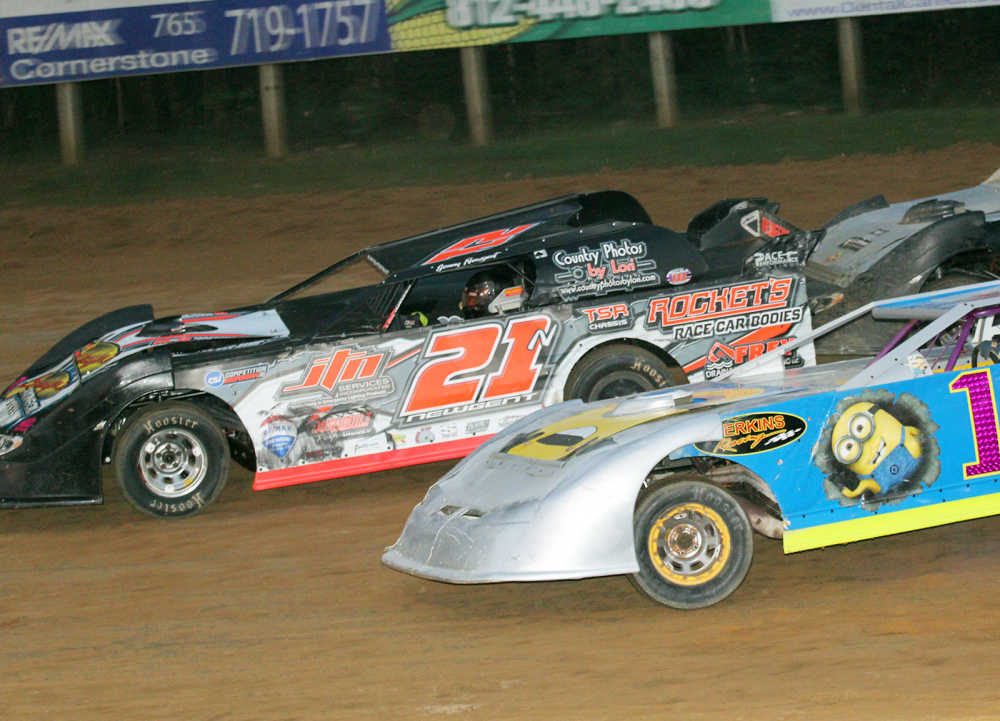 Greencastle's Jonny Newgent (No. 21n) and Jack Cambpell (No. 3) battle for position along with Clayton's Kenny Fields (No. 11f). Newgent went on to pick up the UMP Super Stock feature win.
Carey Fox photo
Order this photo

PUTNAMVILLE — The pits and stands were full for the return of the Midwest Sprint Car Series at Lincoln Park Speedway on Saturday night, and fans were not disappointed with the on-track action.

Brent Beauchamp pulled away by several car lengths to win the $3,000 top prize after a wild battle for nearly the entire duration of the 30-lap main event. Colten Cottle would eventually nail down the second spot ahead of A.J. Hopkins, but all three drivers had a share of the lead at some point in a race that featured 13 lead changes.

Derek Groomer picked up his sixth UMP Modified feature victory as he pulled away to top Tim Prince and James Walters.

Thirty-five sprint cars were on hand to contest the MSCS top prize with Jordan Kinser setting the fast qualifier time.

Hopkins, Cottle, Carson Short and Beauchamp were heat race winners to set the field for the feature.

The opening laps of the A-main was a wheel-to-wheel war between Brandon Morin and Beauchamp as the two set a blistering pace with Short, Hopkins and Cottle close behind. A flat tire by Travis Berryhill halted the action briefly as he returned from the work area at the back of the field.

Beauchamp rocketed to the lead out of the caution and had a solid lead over Short as Morin and Hopkins duked it out for third before a lap 10 caution.

With the field bunched back up Beauchamp got another good jump to lead the pack that was starting to string out a bit at the halfway mark when Koby Barksdale got upside down. He was uninjured, but his No. 22 sprinter was hauled back to the pits.

On the restart, the action heated up as Short ripped past Beauchamp on the bottom of turn three to snag a lead. However, the slicing and dicing had begun as the lead group swapped the top spot corner to corner. Beauchamp slipped back into the lead out of turn four one lap later as Hopkins moved wheel-to-wheel with Short for second. Cottle was close behind running third as the caution flag slowed the field on lap 23.

When the field took the green flag again it was Hopkins that soared into the top spot as he and Beauchamp swapped the point. Hopkins’ lead was short-lived though as Beauchamp took back the lead and Cottle ripped into second as Hopkins got a bit loose with three laps to go.

Beauchamp pounced on the opening and was able to open up some breathing room over the final two circuits as Cottle and Hopkins finished on the podium ahead of Berryhill, who came all the way back to take fourth.

There was no such drama in the modified race as Groomer pulled away from the field quickly and maneuvered through lapped traffic flawlessly down the stretch. A mid-race melee claimed several front running cars as Carlos Bumgardner, Travis Shoulders, Jake Leitzman and Jordan Wever went to the pits while running in the top-10.

Prince and Walters fought for second door-to-door for several laps before Prince took second ahead of Walters, Josh Boller and Jay Humphrey Jr.

Newgent powered to the front off the opening green flag and did not look back in claiming the UMP Super Stock victory. Behind him it was Raines and Shidler that kept the fans entertained early with a battle for second as Scott Ricketts closed on the leaders. Newgent opened up a solid gap on Shidler running second and Ricketts and Raines fought for third ahead of Paul Wright and Wes McClara.

Newgent maintained his lead over the final few laps to pick up the victory as Shidler came in second ahead of Raines, Ricketts and Wright.

In the final feature of the evening, Ben Daniel led through most of the 15-lap feature as he battled with Ethan Litton with Jordan Almanza running third before being sidelined with motor problems. As Daniel and Litton fought for the lead, Litton got sideways in turn one and shot through part of a very muddy infield and was able to maintain his spot as a caution flag came out.

On the restart, Daniel was holding down the lead with Ethan and Josh Litton door-to-door for second. Ethan Litton broke free and came into turn three with a strong run below Daniel coming into turn four. However, Litton made contact with the left rear of Daniel and both drivers made heavy contact with the wall to end their evening. The accident set up Josh Litton to lead the final few laps to pick up the victory ahead of Josh Foxworthy, Cody Wright, Tom Cox and Gary Hayden.