PREP ROUNDUP: Cougar runners get off to good start 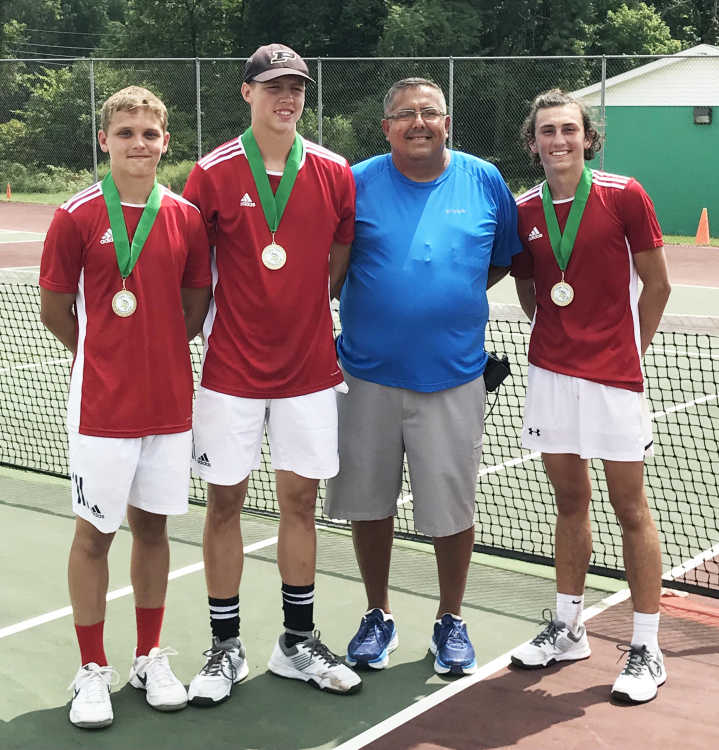 South Putnam finished second in the team standings at Saturday’s Viking Invitational at West Vigo. Winners (from left) were Tanner Pistelli and Austin Arnold in No. 1 doubles, coach Johnny Briones and Thomas Fanning in No. 1 singles.
Contributed photo

North Putnam’s cross country teams got off to good starts last weekend, sweeping North Montgomery in dual meets on Friday and competing well in the Fountain Central Invitational on Saturday.

In the girls’ meet, which also covered two miles, the Chargers had the first two finishers but Anna Haste placed third as the Cougars had the next six runners in winning 25-34.

“We were very excited about kicking off the season,” North coach Kevin Lutes said. “We fared pretty well on both sides. We have a solid base of kids returning, some great talent that has moved up from our middle school and have added a handful of athletes who have never done XC before.

“I look forward to seeing how they develop throughout the season.”

On Saturday, the Cougar girls placed fifth among nine complete teams and the North boys were seventh among 11 teams.

In the boys’ race, Huff was 17th overall

“Even with racing [Friday] night, I thought our teams finished well,’ Lutes said. “In both varsity races, we had respectable groups, although we’ll need to speed those groups up if we want to really compete in the championship season.

“At this point in the season and with what I see in practices, I’m confident we’re making improvements.”

“For not being on a golf course since last Monday against Northview, the Lady Cougars were able to transition some important tweaks to their game,” she said. “With some extra range practice and putting work, the Cougars managed to drop 55 strokes, carding a 444.”

There were several areas with which coach Patrick was pleased.

“Better striking with the driver, improved three-wood usage, chipping more under control, a large decrease in putts, better focus and better course management all played a role in this decrease,” she said. “This is a huge improvement within just one week, especially with outdoor practices being hampered by rain for several days.”

Abby Simmerman carded her best 18-hole ever with a 97. Patrick noted she was able to get 50 percent of her drives in the fairway and only had 26 putts.

Haylee Greene came in with a 108, largely due to hitting more greens on regulation. Nyiah Goff shot a 116, followed by Brittany Bonifacius with a 123. Grace Timm, playing her first 18-hole event this season, carded a 126.

“Overall, the Lady Cougars played well but will need to continue to improve the short game of chipping on for greens in regulation and getting fewer three putts,” Patrick said.

They will have three meets this coming week that will be critical to get them prepared for the WIC on Saturday.

• North Putnam 3, Cascade 2 (girls) — On Saturday, the Lady Cougars won their second game in a row by defeating Cascade.

Cascade scored twice in the second half on penalty kicks.

North’s Grace Fry, Sophia Lotzow and Kylee McCollough all found the back of the net for the second game in a row.

The Lady Cougars will be home today against Owen Valley.

• Greencastle 10, North Putnam 1 (boys) — On Thursday, the Tiger Cubs scored five goals in each half to win the county championship.

• Covington 5, Greencastle 4 (boys) — On Saturday, the Tiger Cubs took a 3-0 halftime lead but were outscored 5-1 in the second half.

“The boys dominated the first half of the game,” Greencastle coach J.D. Sims said. “We had some great link-up play with several exceptional goals. Covington came out strong in the second half and put a goal in early.”

Sims said that at that point, his team “lost composure, communication broke down and emotions took over as Covington pounced on the lack of organization” by the Cubs.

“Greencastle will look to learn from the experience as we push forward in the toughest combination of games this season,” Sims said.

Hector Lezama had two goals to lead Greencastle, while Ben Parsons and Ivan Glotzbach each had one goal and one assist and Jakob Foss had one assist.

• Tiger Cubs split pair — On Saturday, Greencastle hosted both Sullivan and Parke Heritage and split on the day.

South’s Thomas Fanning (No. 1 singles) and No. 1 doubles team of Austin Arnold and Tanner Pistelli finished 2-0 and received medals for their positions.

“Everyone else finished 1-1 and finished third,” South coach Johnny Briones said. “Despite the warm temps and high humidity, everyone performed really well. I am proud of how everyone is performing and playing the thinking man’s game.”

“Everyone played really well and with a lot of confidence,” South coach Johnny Briones said. “We were aggressive and served really well; all in all a great night for Eagle tennis.”

The Eagles won three matches by 6-0, 6-0 sweeps and only lost two sets in one match. The final match was forfeited by Sullivan.