Sharing Council insight into some of the challenges facing Greencastle and its environs, Councilmen Steve Fields, Mark Hammer and Gary Lemon addressed issues ranging from jobs, wages and housing to the community center/YMCA project and the upcoming Indianapolis Road reconstruction effort. 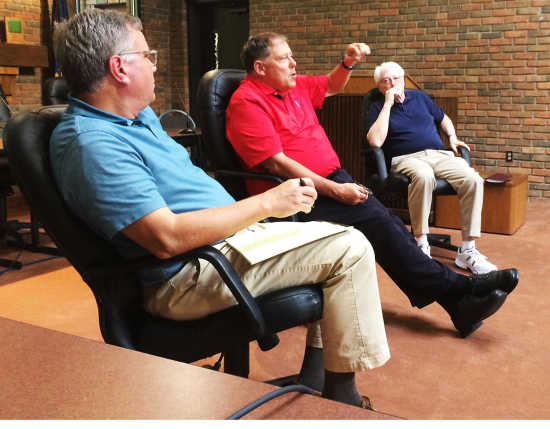 In introducing themselves, all three men offered a glimpse into their affinity for Greencastle while stressing that politics has played no part in how the City Council operates or how they individually vote while offering a glance into their respective futures.

"This is my first, last and only foray into politics," Third Ward Councilman Fields said, indicating he would not be seeking re-election due to health reasons.

At-large member Hammer, the longest-serving member of the Council with a tenure that began in September 1995, said he has not made a decision on whether or not to run again, but "if I do, it will be my last ... for age purposes." He's 61.

Lemon, also an at-large member of the seven-person City Council, said one of the reasons he ran was that he wanted to "keep the momentum going."

He also admitted that when something needs to be done, he wants to do it right away, which can be frustrating while trying to play within the confines of local government.

"The 'Y' is a good example," Lemon suggested. "It's moving forward but it's been slow."

Taking that opportunity to update the audience on the community center issue, Mayor Bill Dory pointed out the city is hoping to option a piece of property but the contract is being looked at by attorneys for both sides at present.

"We will announce the site once the option is agreed upon," he added.

The project undoubtedly would have been closer to reality had the Wabash Valley YMCA -- which would operate the facility if its board of directors votes favorably -- not experienced a change in directors. A new director is on board now, Dory said, and the YMCA group is rewriting the business plan that was put together under the previous director.

"Had we been able to keep the momentum going we had under the previous director," the mayor said, "we would be further along by now."

Lemon, who besides serving on the Council is also a member of the Greencastle Redevelopment Commission that would fund the project with Tax Increment Financing (TIF) revenues, expressed confidence the community center will eventually become a reality.

Fields, who noted that the community center project began several years ago under a different city administration, also expressed frustration with the issue.

"The pace of how everything goes just drives me nuts," he said of government at work, frustrated that "this was started under Mayor Sue Murray, and we still don't have a building up."

Another project the public asked about is the scheduled improvement to Indianapolis Road in the corridor between the Kroger entrance and the stoplight at Percy Julian Drive to provide a third lane, improved drainage and site lines as well as constructing sidewalks along both sides of the roadway.

Mayor Dory, however, said with right-of-way acquisition now complete work such as moving utility lines from the right-of-way could occur yet this fall as the first step in the project.

Regardless, Cheryl Danberry, who resides along the south side of Indianapolis Road, directly across the street from the east entrance to Kroger, urged the Council to make sure that entrance is modified from its present right-in, right-out status with the "porkchop" divider that is supposed to keep traffic from turning left off Indianapolis Road or left out of the shopping center.

Those illegal turns occur all day long, Danberry said, adding the that earlier Monday she witnessed a semi try to turn left into the exit, miss the turn and then back up along Indianapolis Road to try again.

Semis and other vehicles are often seen running right over the porkchop divider to make entry through the exit.

"You've got a great project going," Danberry said of the planned Indianapolis Road venture, urging city officials not to finish it off without addressing the eastern Kroger entrance and the porkchop island.

Meanwhile, jobs and the local pay scale was an issue that dovetailed into other issues like housing and industry involvement.

Lemon, an economist by trade who teaches public finance at DePauw University, noted that with Putnam County routinely having a jobless rate of less than 4.0 percent, "the unemployment rate is essentially zero."

The theory has been that once unemployment hits 4.0 percent and below, the remaining labor pool consists of mainly those with child-care or transportation issues or those who cannot pass a drug test.

That's where Lemon was amazed when he learned some businesses are no longer drug testing because of the shortage of available personnel.

It's not just a Putnam County issue, he said, noting that unemployment across the United States is very low. And under the theory of supply and demand, Lemon suggested, the current situation should be driving wages up.

"I'm an economist," he said. "I should understand this but I don't. A labor shortage should ratchet up wages, but it hasn't happened. I'm not talking about Greencastle only, but all across the country. I don't know the answer, I wish I did."

In the meantime, at least two local industries have resorted to having workers bused in from other areas to fill their needs.

It's a dilemma that is impacted by lack of local housing, which a recent study shows a need for available inventory at all price points, the mayor pointed out.

"Inventory is very, very low," Dory said, indicating there are "probably 40 lots in city limits that are buildable and that includes 20 in the new subdivision (Whispering Winds)."

"More people are not just going to fall out of the sky," she assured. "It's going to get worse."

However, there are things going on behind the scenes, Mayor Dory said, indicating that industry representatives do routinely meet with city and school officials about their concerns.

Crown Equipment, he said, has donated equipment to the Area 30 Career Center to offer training options, while other local companies have provided equipment like robotic units to Area 30 as well.

The three City Council members pointed proudly to how the Council works together on issues.

"Ninety percent of our votes are unanimous," Lemon noted. "I don't know what it means to be an 'R' or a 'D' (Republican or Democrat) on the City Council. Even when we've had a split vote, it's not necessarily been political."

"That's local, that's how it should be at this level," he said, suggesting that if someone came in off the street, "they couldn't pick out who were the Republicans and who were the Democrats."

For the record, Fields and Lemon are Democrats, while Hammer is a Republican. The rest of the Council includes Republicans Stacie Langdon and Tyler Wade and Democrats Adam Cohen and Dave Murray.

The Community Conversation series is sponsored by the Greencastle League of Women Voters, the Putnam County Public Library and the Greater Greencastle Chamber of Commerce as a continuing program designed to give the community an opportunity to hear from and speak to their elected and appointed government officials.

The next installment is scheduled Tuesday, Sept. 11 when Indiana Public Access Counselor Luke Britt visits City Hall for a 7 p.m. program on the Open Door Law and public assess issues.