Tzouanakis students back in class Wednesday, relocated 'until further notice' 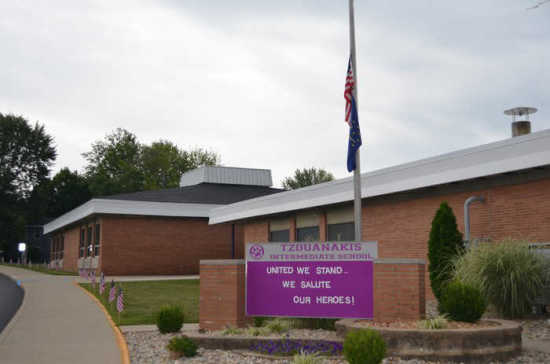 Tzouanakis Intermediate School students will be back in school on Wednesday, albeit in different buildings.

The building, which houses all Greencastle Community Schools students in third, fourth and fifth grades, was closed Monday evening after it was discovered that school officials did not have accurate readings on the level of mold in the building.

Students were out of school entirely on Tuesday as faculty and staff prepared alternate classrooms in other buildings in the district.

Late Monday afternoon, Superintendent Jeff Hubble sent out an automated call and email to all Tzouanakis parents outlining the plan, much of which had been announced during the Monday evening Greencastle School Board meeting.

Pick-up and drop-off of fifth-graders will take place at Greencastle Middle School.

Hubble announced that the relocation will stay in place “until further notice,” which means at least through the end of this week, as testing and cleaning takes place at the Linwood Drive building.

Three days of testing are required, meaning school officials will have results by Friday.

“We hope to have the results of the air-quality tests by Friday, Aug. 31 and will communicate results and additional planning at that time,” Hubble said.

What additional planning could mean depends on what the tests reveal. On Monday, Hubble and school board president Mike White continually noted that there is no information suggesting that the mold levels are healthy or unhealthy.

At this time there is, quite simply, no information.

For bus riders, the procedure will be more or less normal, the only difference being either boarding a bus to their assigned schools or proceeding to GMS in the case of fifth-graders.

For car riders, pickup and dropoff will take place at the assigned schools.

Students who normally walk or ride a bike to and from Tzouanakis may still do so, with a bus transferring them to and from their assigned schools.

Strube attempted to calm parents’ concerns about the relocation.

“I wanted to reach out to reassure you that the TZ administration and staff have worked diligently to plan for a successful relocation from TZ for your child(ren) in the upcoming days,” he said. “Teachers have visited their assigned locations, and have prepared activities and lessons to continue providing students with an engaging learning environment.”

Strube noted that arrangements have been made with food service, nurses and transportation to continue to meet student needs regardless of location.

Additionally, the counselor and administration team will be split between the three locations, with the two Tzouanakis secretaries going to Deer Meadow and Ridpath.

“If you need to contact the TZ staff, it is best that you call the TZ phone number 653-4700 as the phone lines have been rerouted to the primary buildings,” Strube said. “Messages and changes in transportation will be relayed to your child and their teacher.”

The problem of moisture and mold in Tzouanakis is one that the staff has been fighting since mid-July, though they believed they were properly monitoring the mold levels.

That all changed Monday, when Hubble discovered that mold levels had not been monitored at all. With that information, the Greencastle School Board advised Hubble to close the building and work on an alternate plan.

A number of Tzouanakis parents and teachers were in attendance asking why information about the mold, even if it was believed to be at safe levels, had not been shared publicly.

Officials had few answers, except to note that the were working to remedy the problem. Hubble reiterated this message on Tuesday.

“Please know this will take some extra time and considerable effort. If you choose not to send your TZ student during this arrangement, please know it will be counted as an excused absence,” the superintendent said. “We are working diligently to remedy the situation and will keep you apprised of any developments. We thank you for your patience and understanding.”