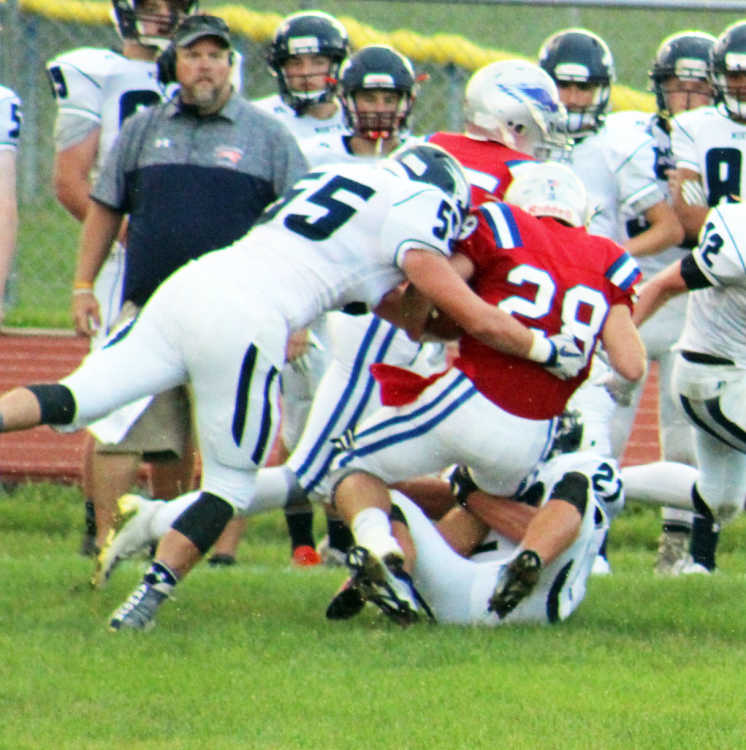 North Putnam coach Sam Carnes knew for his Cougars to have a successful season, they would have to improve on their defensive performance over last week.

The Cougars allowed 42 points to Southmont last week, after surrendering just 12 in the first week, and Carnes wanted to reduce that number by a lo.

North Putnam did just that on Friday night, holding South Putnam to just a safety provided by its defense in beating the Eagles 20-2 to stay unbeaten on the season.

ōWe werenÆt one-sided,ö Carnes said, referring to the slant toward offense earlier in the season. ōIn week one, against North Montgomery, we showed we had a great defense that could do great things. Last week, we had some guys to make some mental mistakes and some coaches who didnÆt get our defense ready to play.

ōIn week 3, our defense came out and played the way we expected,ö he added. ōWe have the kind of defense that can pitch a shutout every week, and we did that.ö

The Cougars controlled the line of scrimmage and limited South Putnam to just 68 yards rushing and 64 yards passing.

ōThe key was the D line answering the call,ö Carnes said. ōWe knew South wanted to run, and every part of our defense stepped up to stop them.ö

A scoreless first quarter saw the teams punt the ball back and forth to each other, as the contest was a rarity with no turnovers by either team.

North Putnam took over on its own 48 late in the opening period, and drove to its first score.

Four plays into the second quarter, Chris Murray barreled in from three yards out to put the Cougars ahead 7-0 after the PAT by Elliot Sabens.

Penalties marred the contest, with a total of 23 called between the two teams totaling more than 200 yards.

Those flags limited offensive production at times, as well as strong efforts by both defenses.

South Putnam was forced to punt on its first possession of the second half, and the Cougars took over on their own 41.

Quarterback Evan Davies scrambled to get away from defenders and then escaped for a 57-yard score to put his team up 14-0 with 9:27 left in the third period.

The Cougars expanded that lead to 20-0 as Davies scored late in the period on a very similar 66-yard run that saw him outrun every Eagle defender in pursuit.Æ

ōEvan doesnÆt look like a running quarterback, but as soon as he hits that hole he looks like a running quarterback,ö Carnes said. ōHe has had several runs like that where he hits the hole and breaks away to outrun everybody. He didnÆt have the kind of game he wanted to have, coming off last week. He couldnÆt get his feet set very well. Coach [Nathan] Aker had his team very well prepared and they were ready for him.ö

The Eagle defense came up with its teamÆs only points just 27 seconds into the final period, as the Cougars committed three straight penalties to bury themselves deep in their own territory.

Murray took a handoff on second-and-27 at his own eight and was trapped in the end zone.

The Eagles took over near midfield after the free kick, and made it all the way down inside the North 5 before the Cougars halted them and went on to run out the clock.

ōThings just werenÆt clicking too much on offense,ö Carnes said. ōWe would make a little progress, and then we would commit penalties and shoot ourselves in the foot. And they were really penalties, too, that we just have to cut down on.

ōThis South Putnam football team is a very good football team, and we are proud to walk away from here with a win,ö Carnes added. ōThey are going to win a lot of games and make a long tourney run in 1A.ö

ōThey took away what we wanted to do offensively,ö he said, after his teamÆs first loss of the year. ōWe played pretty well defensively, but we have to clean the penalty thing up. I thought we had that taken care of, but we just canÆt give a talented team like North Putnam extra yardage like that.ö

Besides the two long runs by Davies, the Cougars managed just 47 yards passing and 90 yards rushing.

ōDavies is just a really talented player,ö Aker said. ōThatÆs a credit to those guys and their coaching staff. Their big boys up front did a nice job.ö

Besides the penalties, Aker thinks his team needs to work on a few other things as it gets ready to play at undefeated Greencastle on Friday.

ōBesides the discipline part, we have to be able to get first downs,ö he said. ōWe just need to keep our offensive positive, whether itÆs three or four yards at a time. Whatever we need to do. We need to get more time for Devin [Cashion] to be able to hook up with his receivers.ö

North will play at Sullivan on Friday.