Eula Gwendolyn Wells, 85, of Greencastle, or "Gwen" as she was known by her family and friends, passed away early Saturday morning, Sept. 1, 2018 at The Waters of Greencastle. 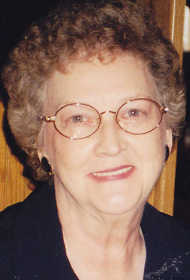 Born April 7, 1933 at Louisville, Ky., she was the daughter of Charles Everett and Connie Velma (Cassidy) Bales.

She spent her early years living on a farm near Brazil, Ind., and later moved with her family to Cloverdale, where her first job was as a telephone operator.

She retired in 2011 after 30 years as a receptionist and monument sales consultant for Bittles and Hurt and Hopkins-Rector funeral homes in Greencastle.

She was married to Elmer A. Wells, who preceded her in death May 24, 1977. She was also preceded in death by her parents; two sons, Joseph Randall Hurt and Charles Edward Hurt; and one brother, Everett Wayne Bales.

Memorials may be made to the Putnam County Food Pantry, 309 E. Franklin St., Greencastle, IN 46135, envelopes will be available at the funeral home. Condolences and expressions of sympathy may be shared with the family at www.BittlesandHurt.com.