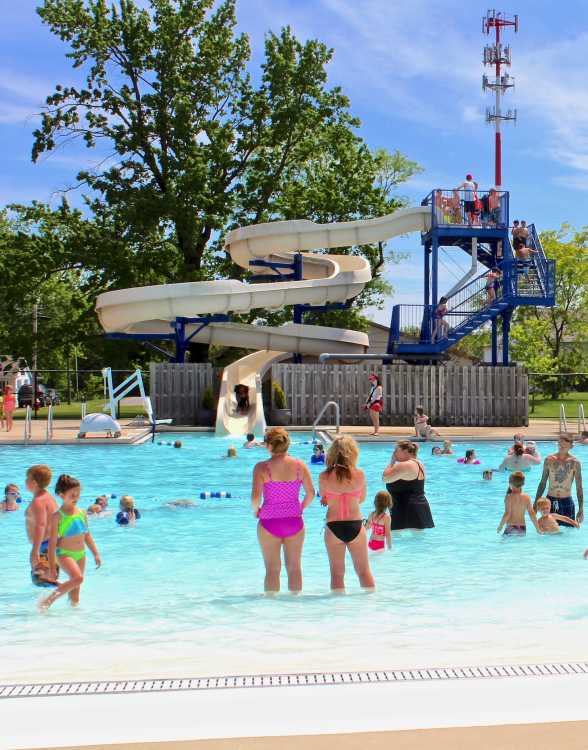 Faced with a tight budget on the horizon for 2019 and pool revenues that don’t even cover expenses, it’s sink-or-swim time for the Greencastle Aquatic Center.

Assistant Park Director Erin Ray, who manages the aquatic center at Robe-Ann Park, presented preliminary 2018 financial figures on the pool season Thursday night as the Greencastle Park Board began to ponder where additional revenues might come from in the future.

Despite a warm summer and what Park Director Rod Weinschenk characterized as “a good season,” gross sales at the pool this year were down more than $7,000 from 2017, Ray reported.

A couple other financial figures jumped out at Park Board member John Hennette, who ran the 90-minute meeting in board President Tim Trigg’s absence.

People reserving the pool for private events typically respond, “That’s all?” Ray said when told of the pool rental fee.

What’s frustrating, Hennette pointed out in perusing Ray’s report, is that the park’s expenses for providing a single pool rental are $184.50, which means it loses money on every pool party of up to 75 persons.

That’s because of which passes were purchased, Weinschenk explained. More individual passes than the more costly family passes were likely purchased this season.

Mayor Bill Dory said he likes to look at the pool as a hybrid of service and business.

He said he doesn’t expect pool revenues and fees to pay off debt service on the facility or fund any major repairs. However, Dory said it’s realistic that revenues and fees at least cover the cost of guards and other personnel necessary to operate the aquatic center.

Hennette suggested the Park Board really needs to see a dollar figure for what it costs to operate the pool per day. That figure would be valuable in further revenue discussion, it was noted.

Increasing revenues other than pool rentals might be difficult, Weinschenk suggested.

“I don’t think we can charge any more than the $5 a head we have right now,” he said of the daily pool admission price. “We’d probably turn more people away then we would pick up.”

The park director said it would be illogical to increase the admission fee unless the park was able to add other amenities like a lazy river or second water slide to the aquatic center.

Mayor Dory also suggested the Park Board look at whether or not the city should continue offering swim lessons as public participation has been lagging in recent years.

“We have competition from other places in the county,“ he said, noting that some parents prefer to take their youngsters to an indoor facility where the water isn’t as cold in the morning and that having to hold lessons outside in cool conditions has hurt city revenues as the department has continued to staff lifeguards for its learn-to-swim efforts but has seen revenues shrink.

“Maybe we need to look at a new model,” the mayor said, suggesting the aquatic center might even partner with other groups for future swim-lesson efforts.

“We’ll be looking at lot of things,” Dory said, adding that one thing he does not see is a need to cut hours of pool operations.

In his search for additional revenue, the mayor said he also plans to contact the Greencastle Civic League, which as part of its splash park project set up an endowment for maintenance of the new facility.

The Parks and Recreation Department spent between $5,000 and $10,000 on repairs to the splash park this year, Dory said, hoping that the city might recover some of that cost from the endowment.

“We love the splash park,” the mayor assured, noting however that its creation has had an effect on overall pool revenues since splash park admission is free.

The Park Board will talk about the department’s revenue situation more in depth over the next couple of months.