Sullivan gets off to hot start, hands Cougars first loss

By B.J. HARGIS, For the Banner Graphic 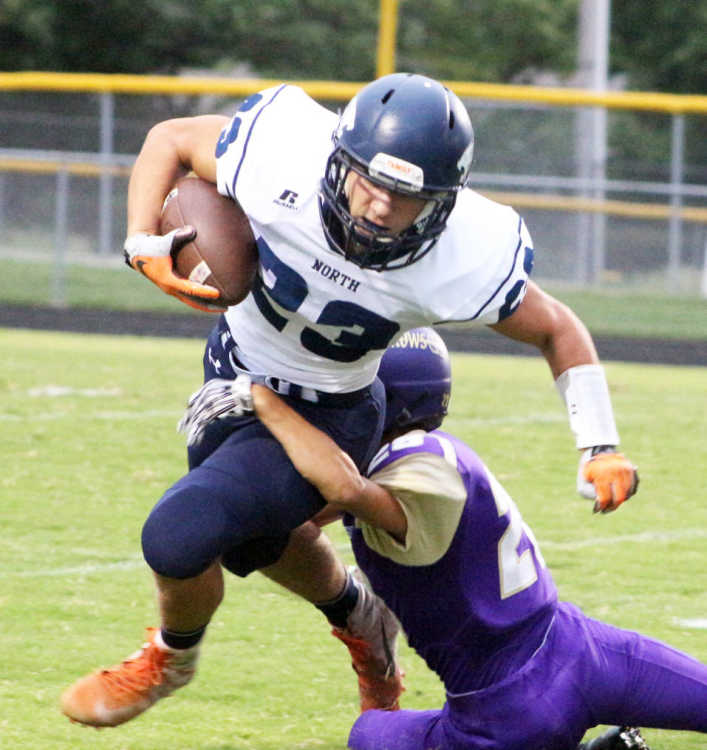 SULLIVAN — After falling from the ranks of the undefeated with a 50-20 loss at Northview last week, the host Golden Arrows started Friday night’s game at Sportland Field with 27 unanswered points and went on to a 48-21 victory over visiting North Putnam.

It was the first loss of the season for the Cougars, who dropped to 3-1, 1-1 in the West Division of the Western Indiana Conference.

North Putnam coach Sam Carnes was respectful of his team’s opponent, while acknowledging at the same time that many of the Cougars’ problems were of their own making.

“We got beat by a great team,” Carnes said. “We shot ourselves in the foot in just about every way imaginable.”

The Arrows were coming off a 50-20 pasting at the hands of Northview last week.

“Defensively it took three series to wake up, and by the time the were out to a big lead,” Carnes said. “Then our defense got several big stops and a couple of turnovers and we couldn’t capitalize on them. We made several great plays on both sides of the ball, but as soon as we did, Sullivan would come back and make a bigger play.

“To Sullivan’s credit, they played hard and had a great game plan.”

“It was important for us to get off to a good start,” he said “Especially needing to bounce back after losing last week.

“We got those two big plays in the first quarter and never looked back. This was a big win for us against an undefeated team.”

Jack Conner completed 14 of 19 passes for 164 yards, two TDs and his first interception of the year, by Lucius Anderson in the end zone to end the half.

Conner started the SHS scoring with a 41-yard run on Sullivan’s first possession. Kathleen Ming booted the first of six PATs as Sullivan led 7-0 just 79 seconds into the second quarter.

After the Sullivan defense forced a North Putnam punt, Conner connected with Karter Vernelson on a middle screen, which went for a 49-yard touchdown, putting the Arrows ahead 14-0 after the opening quarter.

Jakeb Skinner then took over for the Arrows. He scored on a 16-yard run and 27-yard pass from Conner as Sullivan went ahead 27-0.

But North Putnam responded as Aidan Baker bolted through the Sullivan defense for a 28-yard scoring run with 23.9 seconds left in the half.

North Putnam, which had 273 yards compared to 404 for Sullivan, tacked on two scores in the second half.

Kolten Thorson hauled in a 70-yard scoring pass from Evan Davies in the third quarter and Robert Greene had a 2-yard TD run in the fourth.

Davies completed 9 of 25 for 174 yards and two interceptions.