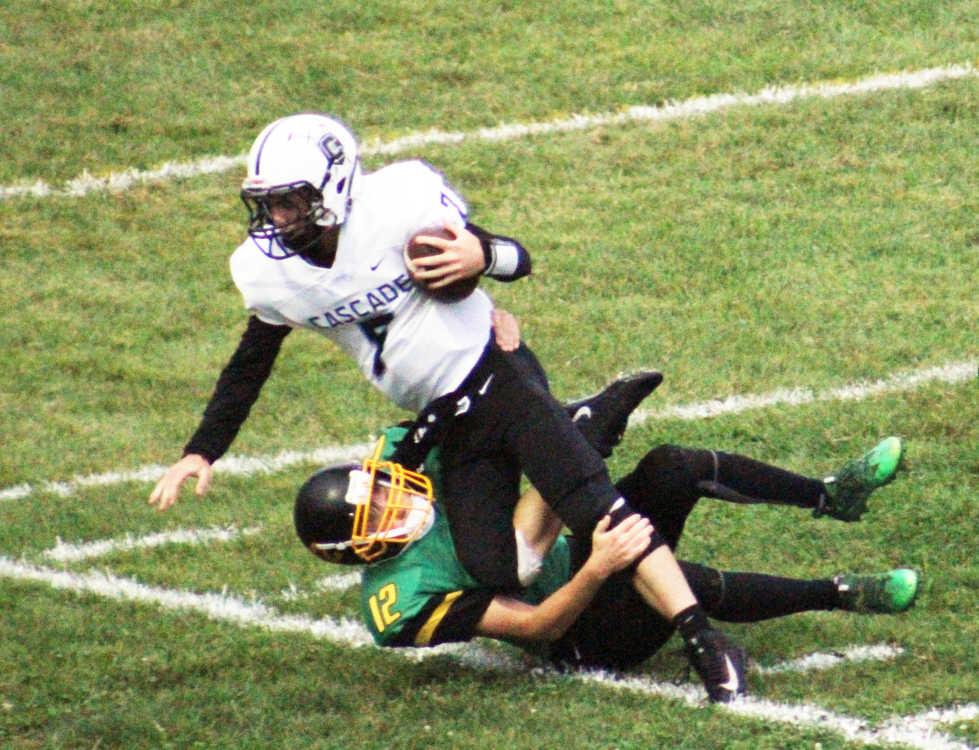 Yet the Clovers used a strong defensive effort to stay close to visiting Cascade despite falling just short in a 14-8 loss that kept them winless on the season.

Clover coach Tom Winders was proud of his team’s effort throughout the game.

“It was a hard-fought game,” Winders said. “Cascade didn’t expect us to do some of the things we did after making some adjustments this week. They are strong up front, but I think our front line did a fantastic job. We were able to open some gaps and get some holes to run through.

“We opened up with some good passes, and it if would have stayed a little bit drier we may have stayed with that.”

Cloverdale’s defense stopped Cascade twice in a scoreless first quarter. The Cadets took the opening kickoff and marched to the Clover 14 before being stopped.

The Clovers also forced the Cadets to punt late in the period.

Cascade got the only points of the first half in the second quarter thanks to its defense, as a Parker Watts pass glanced off the wet hands of Jake Wilkes and popped up in the air — and Cascade’s A.J. Sanders picked it off and ran it back 35 yards for a score.

“Jake is as sure-handed as anybody,” Winders said. “He makes that catch if it’s not raining.”

The Clovers were able to keep Cascade from doing more damage early in the third period despite losing fumbles on two straight plays. The Cadets did get their second score with 2:32 left in the period as Sanders caught a 48-yard TD pass from Dylan Kottkamp.

Wilkes put his team in a position for its only score with 7:51 left in the game, as he sacked the Cascade punter on the Cadet 12.

After two short runs by Watts, Logan Abner scored from six yards out and then added the two-point conversion to cut the gap to 14-8.

Cascade ended its next two drives by losing fumbles, but the Clovers could not capitalize. Twice Watts escaped the pocket to nearly run for a first down on a fourth-down play, but was stopped just short.

“I am super proud of our defense and our offense,” Winders said. “They did a fantastic job under those conditions. It was nasty there, and the hogs like to play in the mud.”

Winders hopes his team can build off this strong performance as it travels to North Putnam next week.

“We have learned our lesson from last year,” Winders said. “They got in our heads a little bit early [in a 27-0 win], but we were more ready for them this year. The changes we made to our offense helped a lot; in the first three games, we couldn’t move the ball at all.”

Winders saw several other bright spots by his team.

“We had a couple of good passes early, and it’s a shame we weren’t able to keep throwing the ball,” he said. “Penalties were good for us again; we had very few of them. Overall I think everybody played well. We had a few mistakes, but we didn’t have too many.”