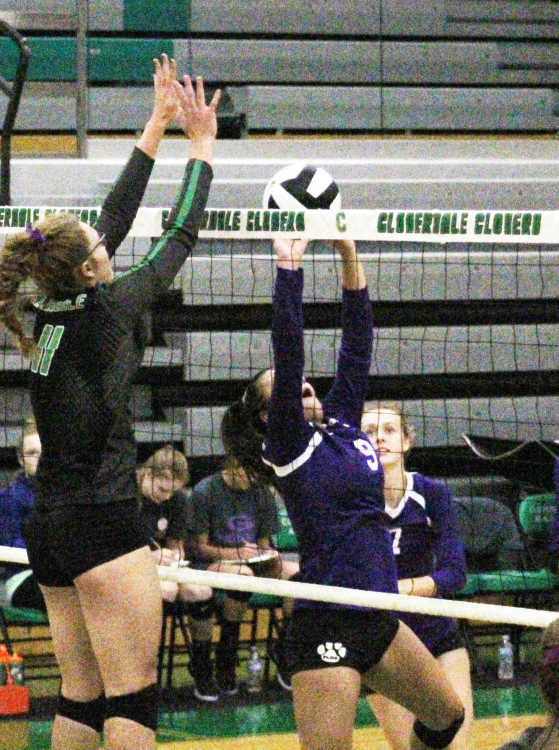 Greencastle's Jalyn Duff sets the ball for a teammate as Cloverdale's Tori Combs goes up to block in the county tournament on Saturday.
Banner Graphic/JOEY BENNETT
Order this photo

Duff was hoping to help her team to reverse an earlier loss to Cloverdale, and give the Tiger Cubs their sixth straight county title.

On a personal level, Duff was hoping to keep alive an incredible streak in which she has never lost a match or game in county tournament competition in either volleyball or basketball — dating all the way back to seventh grade.

Despite trailing 13-11 in the final set, which was only to be played to 15 points, the Cubs were able to score the final four points and give Duff her 11th county title.

How much pressure was there in that last set, especially being behind?

“There were a lot of emotions,” Duff said. “We had a good kill, but someone was in the net. We knew we had to fight hard, as hard as Cloverdale was fighting. It was not easy, and they are a really good team.

“We proved we were the better team.”

Maggie Walters, Duff’s volleyball coach all during high school as well as an assistant coach on the basketball team, has no doubt about why Duff’s teams have been so successful.

“She wants to win, and she knows what it takes to win,” Walters said. “That is why she’s been on 11 county championship teams. Jalyn understands that winning isn’t always about having the team with the most skill.

“Her focus as a leader is to create a culture of competitiveness on all the teams that she’s a part of,” Walters added. “She expects to win, and that expectation of herself and of her team has allowed her to never lose a county championship.”

Duff is the son of Jarrod Duff, a former standout athlete at Greencastle who has also had coaching success at several schools and currently directs the North Putnam girls’ basketball and softball teams.

She is not often at a loss for words, but found herself in that situation when asked about completing the volleyball title streak.

“My other three seniors [Jada Amis, Mckenzie Woodall and Ivy Wright] are undefeated too,” Duff said. “We couldn’t have done it without them and their leadership. Coach Walters and coach [Denise] Meyer have pushed us every day to make us better so we could achieve this.”

Greencastle had lost 3-1 to Cloverdale just nine days before the county tourney, but the confident Duff did not think that defeat would hurt her team.

“Our team wasn’t going to let that loss beat us,” she said. “We were going to practice harder, and we did. I think we had one of the hardest practices ever after we lost to Cloverdale and we were pushing ourselves to be able to win the county again.”

Duff is a member of a strong senior class of athletes that also includes basketball colleagues Seelye Stoffregen, Bailey Shuee and Claire Gillen.

She is the only one of that strong group to have played every year during the undefeated county tourney run, though.

Duff is a setter for the Tiger Cub volleyball team, and also does a lot of the unsung work defensively by diving to the floor for digs.

One of her new roles this season has been to take up the slack from the graduation of Maggie Meyer, who now plays collegiately at Marian.

Meyer was the only senior on last year’s sectional championship team, and while her outstanding skills were helpful to the team her biggest role was as a motivator and leader.

“We miss Mags so much,” Duff said. “She’ll never be replaced. I like the role of being a leader. I love when the whole team looks at me and we have each other’s backs.”

Walters saw early on that Duff had the kind of leadership qualities that successful teams have to have.

“Watching her grow as a leader these past four years has been so much fun,” said Walters, a Michigan native who played collegiately at St. Joseph’s. “Coming in as a freshman, I could tell right away that she was going to be a competitor. She came in every day to work hard because she simply hates to lose.

“The first two years that she was in the program, she needed to be pushed from her coaches and upperclassmen, but these past two years, she hasn’t,” Walters added. “She’s truly learned how to hold herself accountable. This is exactly what makes a good leader.”

Duff would like nothing better than to also help lead the Tiger Cubs to their sixth straight basketball county title this winter and complete a perfect 12-0 career in county tournaments.

That task is still a while away, though, and for now Duff and the Tiger Cubs are working hard toward repeating their volleyball sectional title next month.

She thinks the county championship can help to steady what has been an up-and-down season.

“In some of our losses it just gets in our head,” she said. “But we beat the teams we have to beat when it comes down to that time. We beat Sullivan in our only conference match so far, and that’s a big deal to us also.”

Walters plans to enjoy having Duff in charge of her team on the court this year, and worry about finding a replacement for her in that job when summer workouts resume next year.

“She has matured into a young woman that expects so much of herself on and off the court, and her teammates feed off of this,” she said. “She is the type of player that you need on your team. No matter how much skill a team has, you can’t win big games without a leader like Jalyn Duff on your side.”