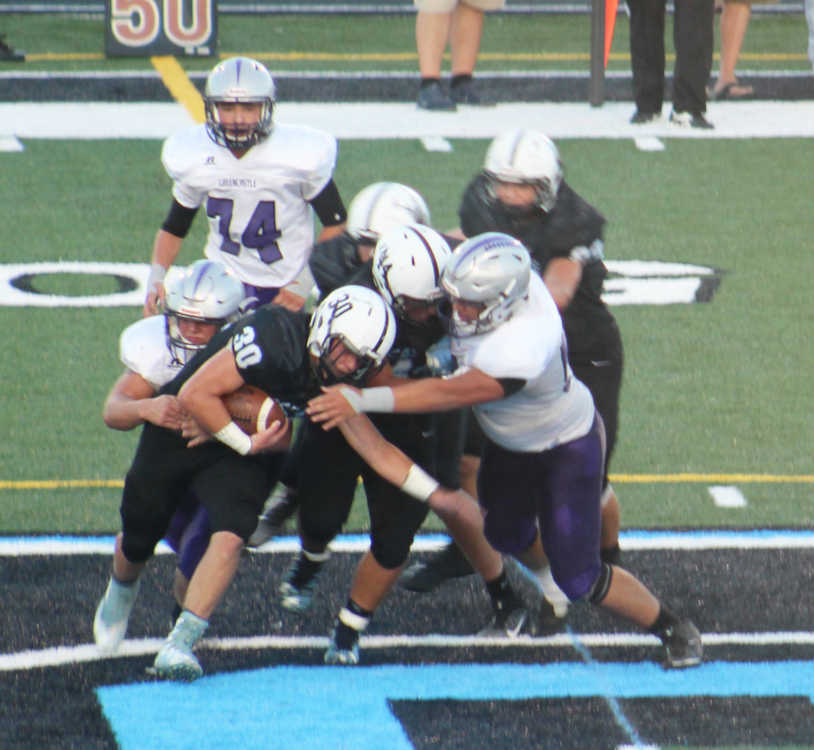 In the case of Greencastle running back Damon Moody, that description is inaccurate. The Tiger Cub senior only knows one way to play football — hard-nosed and non-stop.

Moody torched the Cascade Cadets for 271 yards rushing and four touchdowns as the Cubs stayed undefeated on the season with a 49-26 win.

“He just doesn’t get tired, and as the game continues on he just gets stronger,” Greencastle coach Mike Meyer said. “He’s got a great attitude and a great motor, and he just took off. In that third quarter, we kept handing it to him and he kept getting touchdowns.

“It was an outstanding performance by him.”

Moody did not start last season as the team’s workhorse in the backfield, but moved into that spot after a few games.

He has added the job of defensive end this season, and he likes the dual role.

Moody quickly deflected attention from his own exploits and passed around the credit.

“I would like to thank my linemen and my family for their support,” Moody said. “In the second half [leading only 17-14], we came out and said we were better than them and we turned it up a notch.”

Moody had an eight-yard TD run in the second quarter that put his team up 10-0. Hector Lezama had gotten the Cubs on the board in the first period with a field goal.

Cascade bounced back with a pair of long touchdowns passes to talented junior receiver A.J. Sanders to take a brief 14-10 lead.

Cadet quarterback Dylan Kottkamp hit Sanders for a 51-yard score with 7:31 left in the first half, and after forcing the Cubs to punt after getting just one first down the Cadets struck again.

On the second play from scrimmage, Kottkamp pitched out to running back Cole Edwards — who tossed a perfect pass downfield to a wide-open Sanders for a 71-yard score.

One of the smallest players on the field then turned in one of the biggest plays, as Greencastle’s Jake Overstreet (all 5-foot-1, 130 pounds of him) returned the ensuing kickoff to the Cadet one.

Cub quarterback Brayden Baxter scored on a quarterback sneak on the first play from scrimmage, and Greencastle had its 17- 14 lead to take into halftime.

Baxter hit Gavin Bollman on a 16-yard touchdown with 2:25 left in the third period. After Greencastle forced the Cadets to punt, Moody ran 62 yards for a score on the last play of the third period and a 30-14 lead.

Moody ran 37 yards for a score on his first carry of the final period, but Sanders returned the kickoff 85 yards for another score.

Dakota Campbell returned an interception 35 yards for another score, and Moody sealed the win with a 51-yard score with 4:35 left.

Cascade added a final score on a 2-yard run by Conner Horning.

“We had a great overall game with a lot of great performances,” Meyer said. “We are happy to be 5-0, and we know we have a tough game coming up on Friday [at Sullivan]. We are glad to be undefeated going into that game.”