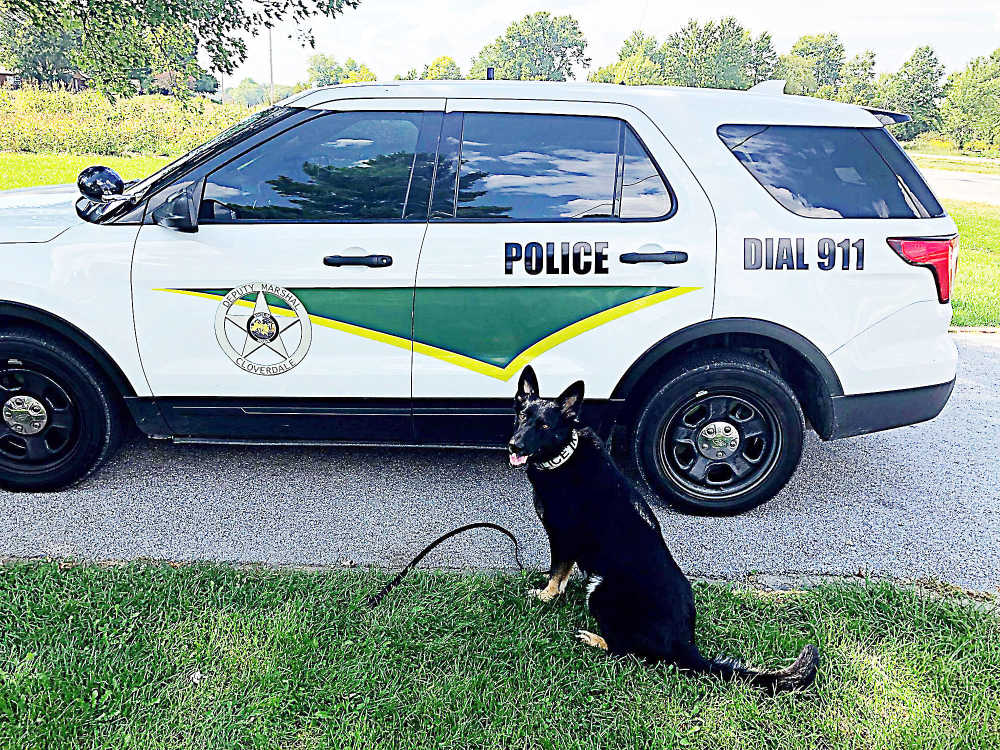 Noting that parents post first day of school photos, Cloverdale Deputy Marshal Levi App shares a “first day on the job” picture of his new K-9 partner Maggie on Wednesday. It was a productive first day for the duo, as App made a drug arrest as a result of Maggie’s detection skills.
Courtesy Levi App

CLOVERDALE — The first day on the job was a productive one for new Cloverdale K-9 officer Maggie.

Having just received full certification for narcotic detection the day before, Maggie was spending her first day on the job Wednesday when her handler, Deputy Marshal Levi App, was called to assist Marshal Steve Hibler with a traffic stop.

At 4:51 p.m., Hibler responded to a radio broadcast that a vehicle traveling north on U.S. 231 toward Cloverdale was possibly being operated under the influence.

Once App was on the scene he spoke briefly with the driver, whom he believed to be under the influence of narcotics.

App had two passengers exit the van and received consent from the driver to search the van.

Maggie was then deployed to conduct a search around the vehicle, her first on the job.

During the search, App observed his K-9 partner make two positive indications on the van. App then conducted a full search of the vehicle.

Nothing further was located during the search.

The driver, 40-year-old Harley Coffey of Brazil, was later put through field sobriety testing and taken to Putnam County Hospital for a blood draw, which came back positive for a controlled substance.

App transported Coffey to the Putnam County Jail, where he was booked in at 8:36 p.m. on preliminary charges of felony possession of methamphetamine and driving with a Schedule I or II controlled substance in the body.

“Levi said that he could not have asked for a better first day on the road after being certified with his K-9,” Hibler said, “and thanks the community of Cloverdale for allowing him to put such a valuable tool on his belt.”

The Cloverdale Town Council approved the addition of a K-9 unit during its Aug. 14 meeting, with funding for the animal coming through donations.