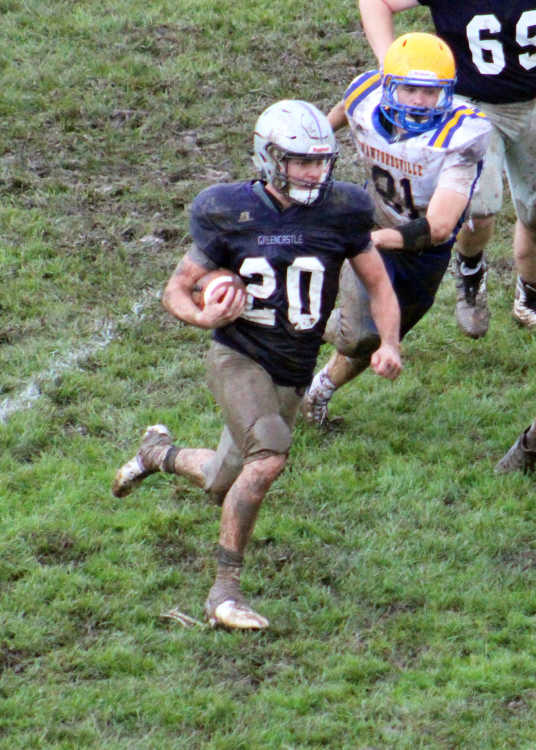 Greencastle's Damon Moody is the 13th-leading rusher in the state through five games.
Banner Graphic/JOEY BENNETT
Order this photo

With the air scheduled to turn cooler this weekend, the post-season for the eight IHSAA fall sports is either upon us or rapidly approaching.

Football is exactly at the halfway point of its season, having played five weeks with four more and the sectional first-round games over the next five weeks. More information is available on football than other sports, courtesy of John Harrell’s website, but we will take a look at each one as best as possible.

Here is a look at each sectional field involving Putnam County teams:

• Greencastle — The Tiger Cubs are the only undefeated team in Class 3A Sectional 30. Monrovia and Sullivan are both 4-1, with Sullivan having lost only to Northview (ranked 10th in 4A) and Monrovia’s only defeat at the hands of Triton Central (ranked second in 2A).

Running back Damon Moody ranks 13th in the state in rushing yards through five weeks.

Danville and Tri-West are both lurking at 2-3, with both being strong programs that can’t be counted out due to their strong schedules.

Greencastle can make a strong statement for its sectional chances over the next three weeks. The first five opponents of the Tiger Cubs have combined for only a 6-19 record, but Greencastle plays at Sullivan (4-1) tonight, hosts Northview (5-0) next week and plays at North Putnam (4-1) in week eight.

• North Putnam/Cloverdale — The Cougars are 4-1 with the third best record in 2A Sectional 38. The only problem is that the two undefeated teams, Western Boone and Tipton, are ranked first and third in 2A.

Cloverdale will look to turn its 0-5 record around starting tonight against Brown County.

• South Putnam — The Eagles started the season strongly, even receiving votes in the state rankings, but have lost three straight games to teams who are a combined 13-2.

The Eagles only have the fifth-best record in Class A Sectional 45, but would have to be considered one of the favorites. They are the only school in the field which plays all IHSAA teams, none of them in their classification, and many of the sectional members only play against each other and other lesser private school programs.

• COUNTY STANDINGS — The only game left between county teams will be Greencastle at North Putnam on Oct. 5.

Both teams have defeated South Putnam and Cloverdale.

• WIC — Crossover playoff matches are Saturday. Northview is the only school playing in both matches.

• WIC — Northview is the prohibitive favorite to win the title, again.