PUTNAMVILLE -- The Indiana State Police Post at Putnamville conducted its annual inspection and audit of personnel and equipment Thursday.

Eighty-five enforcement personnel passed through the annual event. Commanders inspected the uniform appearance and the commission and equipment of all troopers and detectives from the Putnamville Post, as well as some officers from outside the district.

The inspection/audits are staged annually at all 14 State Police districts. 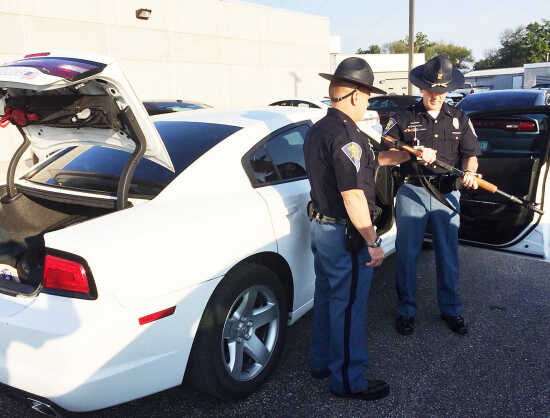 At the conclusion of the individual unit's inspection, the results of the inspection/audit are noted by the unit's immediate supervisor in the monthly observation guide and later in the employee's yearly evaluation.

The Indiana State Police Department is intent on providing the best law enforcement service possible to the citizens of Indiana. To do that, the department purchases state-of-the-art equipment for each officer and then expects him or her to take the utmost care of all issued equipment.

"As commanders, we are tasked to ensure the issued equipment is accounted for and properly maintained," Putnamville District Commander Lt. Dan Jones said. "Hard work, dedication and preparation were very evident today as our troopers passed through the inspection and audit lines. As the district commander, I am very proud of our troopers efforts today."