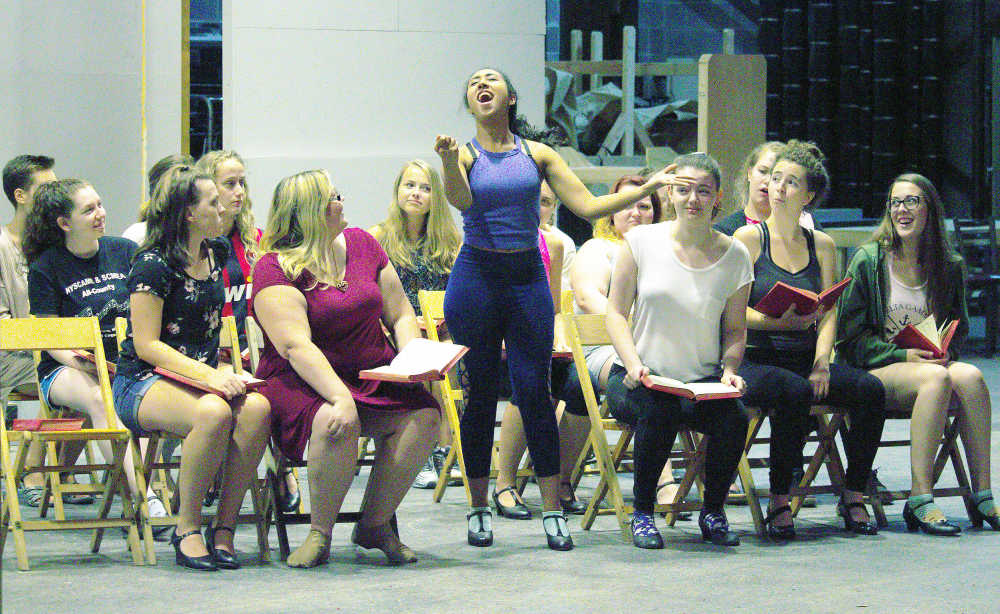 Students rehearse a scene from the musical comedy “Sister Act,” to be presented at Sept. 27-30 in Moore Theatre within the Green Center for the Performing Arts at DePauw University. The Thursday-Saturday shows begin at 7:30 p.m. with a 1 p.m. matinee Sunday.
Courtesy photo

DePauw Theatre and the DePauw University School of Music are combining forces to present the feel-good musical comedy “Sister Act.”

The musical, based on the hugely successful 1992 film starring Whoopi Goldberg, will be presented at 7:30 p.m. Thursday through Saturday, Sept. 27-29 in Moore Theatre within the Green Center for Performing Arts. A matinee performance will be presented Sunday, Sept. 30 at 1 p.m.

“Sister Act” follows the turbulent life of Deloris Van Cartier, a flashy nightclub singer who, after witnessing a murder, enters the witness protection program and goes into hiding in the last place anyone would expect -- a convent.

Although initially horrified at the restrictions of her new surroundings, Deloris soon learns to appreciate the timid, unworldly sisters -- and they love her confidence, style and exuberance.

When Deloris transforms the sad, off-key Queen of Angels choir into a Philadelphia singing sensation, she gains financial security for the convent but loses her anonymity -- and her safety. When Deloris and her “sisters” are threatened by would-be assassins, they must find their courage in their faith and in each other.

“At the heart, this is a show about community wrapped in disco tunes, beautiful ballads, and many strong female leads,” the show’s musical director, Steven Linville, said. “Throughout the show we see huge transformations and very poignant moments. It’s been amazing seeing all of these students create these characters and embrace this difficult music. Throughout the laughter, there’s a truly powerful story to be told.”

“There’s such a great message about what it means to be a part of a community in the show,” notes senior Abigail Martin, who portrays Sister Mary Patrick. “One of the things I love about the show is that it’s an important reminder about how vital it is to be a part of a group and to have people around us who can build us up when we desperately need it. The nuns, although a little quirky and offbeat, are good souls who are undoubtedly there for each other. That’s something we all need to have in our daily lives.”

The set for the show, designed by DePauw’s new technical director Jaye Beetem, is one of the biggest and boldest endeavors taken on in recent memory. Consisting of more than 30 movable pieces and dozens of projections, the set is designed to dazzle and delight as Deloris dances her way through the streets, churches and nightclubs of 1970s Philadelphia.

Tickets are $10 for general admission and $5 for students and are available at the Green Center box office (658-4827) or online at depauw.edu/arts.