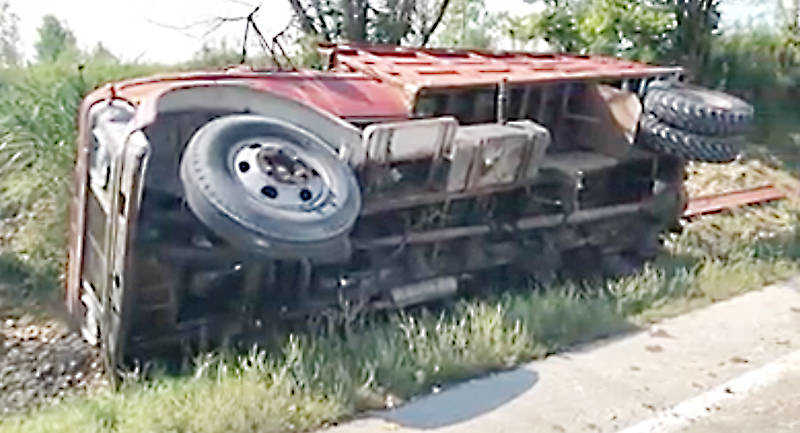 A Bainbridge man escaped serious injury and avoided a more serious crash when he overturned his dump truck in a ditch on U.S. 36 Thursday morning.
Courtesy Putnam County Sheriff’s Department

GROVELAND — A Bainbridge man likely prevented a much more serious accident Thursday morning by making a split-second decision when the brakes went out on his dump truck.

Westbound on U.S. 36 in a 1965 Ford dump truck around 11:30 a.m., 73-year-old Joel Thompson was just west of Groveland approaching a temporary stoplight for bridge work in the area.

Thompson told Deputy Brian Helmer that traffic was stopped at the light, so he tried to apply the brakes, but the pedal went to the floor.

Knowing he was about to hit the vehicles in front of him, Thompson swerved to the right and put the dump truck in the ditch, this caused the truck to roll onto its side but avoided contact with other vehicles.

Thompson, who is the vice president of the Bainbridge Town Council, was transported to Hendricks Regional Hospital for observation.

Curtis Wrecker was called to retrieve the vehicle. The effort caused the slowing and occasional stoppage of traffic into the afternoon hours.