Literally East Side ... West Side ... all around the town, street projects have been chosen for inclusion in Greencastle’s 2019 Community Crossings grant application.

Thirteen projects and one alternate were approved by the Greencastle Board of Works and Safety at its September meeting.

The estimated $767,765 total covers projects in three areas of work -- street overlay, overlay plus curb and surface treatment/crack sealing work. The city is expected to provide a $380,000 matching amount for the work. 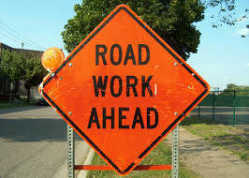 Mayor Bill Dory said the city’s application for Community Crossings funding is due Sept. 30 on projects to be undertaken next year.

Meanwhile, an estimated $200,059 in overlay and curb work is also included in the city’s application for:

-- Apple Street, from Crown Street to Illinois Street with curb along the south side, estimated $67,630.

-- Shadowlawn Avenue, from College Avenue to Arlington Street with curb along north side, estimated $132,429.

Also included in the application outline are three projects involving surface treatment and crack sealing for a total estimate of $174,902.

The city has also listed one alternate project involving overlay work with some crack sealing and surface treatment for an estimated cost of $65,830.

Mayor Dory said the city has already budgeted $365,000 in MVH (Motor Vehicle Highway) funds for street resurfacing next year, an amount that could be used for matching funds.

Other potential sources of matching local funds could come from Local Road and Street funds and EDIT money set aside for public works/storm water work ($100,000), sidewalk renovations ($100,000) and new sidewalks ($100,000).

Another potential source of funding would be the city’s special distribution of LOIT (Local Option Income Tax) funds, of which $200,000 has been set aside for such projects. However, the preference for using those funds is to hold them for larger 2019 or 2020 projects, the mayor noted.

Board of Works members Trudy Selvia and Craig Tuggle joined Mayor Dory in approving the city’s 2019 Community Crossings grant application and authorizing the mayor to sign off on the grant project.