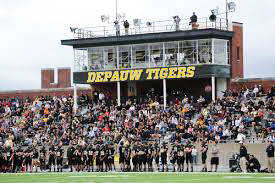 Series record: Ohio Wesleyan leads the all-time series, 21-9-1 after DePauw topped the Battling Bishops, 31-30, in Delaware last year. Ohio Wesleyan has won 11 of the 15 meetings in Greencastle including the last six. The Tigers’ last home win in the series came on September 21, 1974, by a 21-10 score.

Scouting OSU: Ohio Wesleyan opened the season with a 10-7 loss at Otterbein before defeating Wooster at home, 9-7, and losing at Allegheny, 25-17.

The Battling Bishops held a 17-9 lead at Allegheny early in the third last week, but the Gators outscored them 16-0 for the win. Quarterback Jax Harville has completed 58.3 percent of his passes for 405 yards and one score with Deji Adebiyi leading the receivers with 14 catches for 127 yards. Sasoun Tcholakian follows with 11 catches. Trey Dixon has rushed for a team-high 71 yards.

DePauw update: The Tigers are coming off a loss at Wooster in which they held the Fighting Scots to a school-record minus 50 rushing yards. For the season, DePauw ranks fifth in Division III by limiting teams to just 33.0 rushing yards per contest.

Zach Williams paces the defense with 29 tackles, while Matt Crupi follows with 22. Nate Orrison has a team-high 4.0 sacks as the Tigers have 12 as a team.

Offensively, Cam Haynes and Chase Andries have been splitting time under center since Matt Labus sustained an injury near the end of the first half of the Central game.

Will Harris has caught a team-high 16 passes, while Andy Hunt has 14 including four touchdown catches. Tanner Cleveland has rushed for a team-best 62 yards.

Jake Tanner has connected on both of his field goal tries including a career-long 42-yarder and is 10 of 10 on extra-point attempts. Ty Johnson has averaged 39.3 yards per punt. Hunt has returned six kickoffs for an average of 27.0 yards, while Logan Greene has two punt returns for an average of 24.0 yards.