Cubs ‘still have a lot to play for’ despite loss 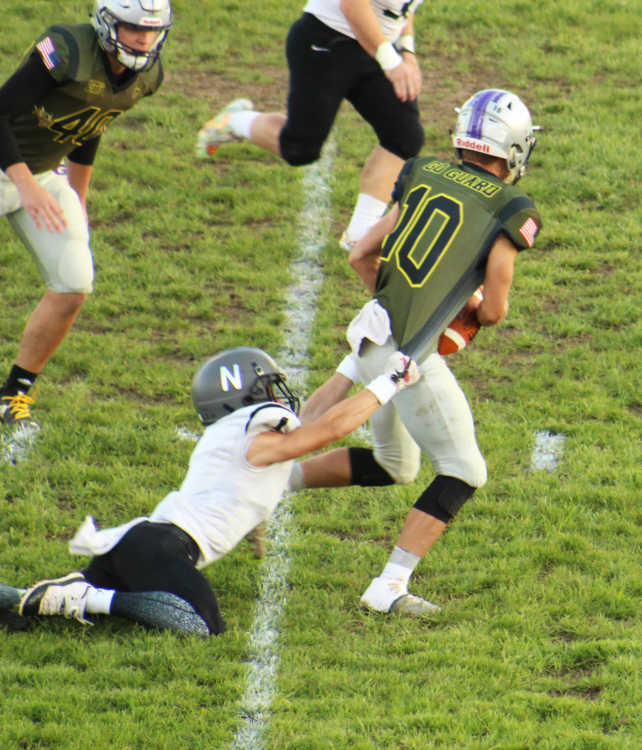 For the first time this football season, the purple lights were not aglow on the Victory Tree at Harbison Stadium on Friday night.

Northview proved to be a rude house guest, jumping out to a 21-0 lead and never being challenged in a 42-9 win that gave the Knights the Western Indiana Conference West Division title and handed the Tiger Cubs their first defeat.

The biggest thorn in the sides of the Tiger Cubs was Northview senior quarterback Trey Shaw, who ran for 173 yards and passed for 191 more.

Greencastle coach Mike Meyer was unsure at which aspect which Shaw excelled more.

“He had a heckuva night, and we had no answer for him,” he said. “He hurt us both throwing and passing, and defensively they kept us pretty much in check. They controlled both lines of scrimmage, and they just beat us.”

Greencastle had a promising opening drive, with Alex Costin catching a 29-yard pass for a first down to quickly put his team into enemy territory.

The Cubs fumbled on their next play, though, and Shaw directed his team to a score in just eight plays — throwing the first of three touchdown passes to Trevor Cook from 12 yards out for a 7-0 lead.

Greencastle was forced to punt without a first down on its next possession, and Cook scored on a 59-yard run on the second play of the ensuing drive to make it 14-0 after just 4:31.

Greencastle managed a pair of first downs on its next drive, but was eventually forced to punt again.

Shaw completed a 21-yard pass to Korbin Allen to get his team near midfield, and hit Cook on a 54-yard score on the following play to make it 21-0.

The Cubs took advantage of a 53-yard kickoff return by Dakota Campbell and a Northview penalty to get the ball deep in Knight territory. They eventually settled for a 30-yard field goal by Hector Lezama to get on the scoreboard.

The Northview scoring machine continued, with Shaw marching his team right down the field again and hitting Cook on a four-yard pass with two minutes left in the half.

After another long kickoff return, Greencastle’s Damon Moody scored on a 52-yard run to cut the gap to 28-9.

Greencastle was finished scoring for the night, while Northview added a touchdown from running back M.J. Shelton in each of the final two quarters.

Despite the defeat, Meyer knows his team’s season is far from over despite the WIC title now being out of reach.

The Cubs will play at North Putnam next week for the county championship, hoping to avenge a 10-0 loss on their home field last year with similar stakes on the line.

Greencastle also holds the best record in Sectional 30 at 6-1.

“This was a tough loss, but we have a lot to play for,” Meyer said. “We still have a good record, and a big one coming up with North Putnam. We have to lick our wounds and get ready to go. I’m disappointed and I know the kids are disappointed, and we’re going to have to figure it out.”