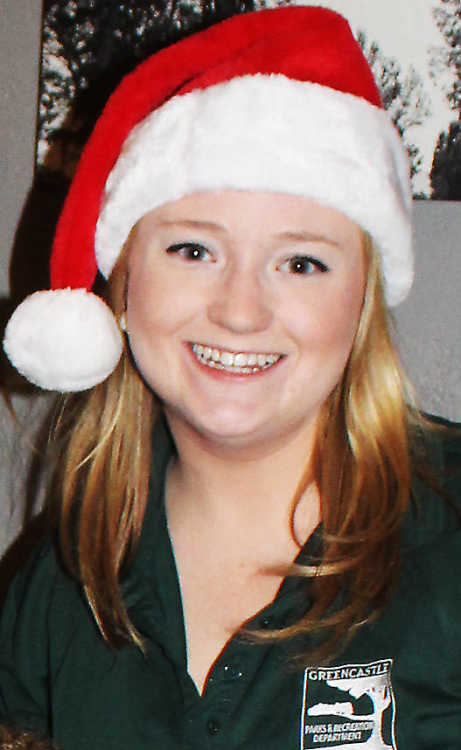 Municipal meetings don’t generally come with their own soundtracks, but the October session of the Greencastle Board of Park Commissioners maybe should have.

It’s not like the resignation of Assistant Park Director/Aquatics Director Erin Ray was a “when hell freezes over” moment like The Eagles rock group endured in a long-ago breakup. In fact, Ray was technically “already gone” Monday night by the time Park Board members encountered their version of “heartache tonight.”

Ray is leaving the department after 16 months to take the recreation coordinator position for the City of Auburn Parks and Recreation Department. Her last day on the job in Greeencastle will be Saturday, Oct. 27 when she has three Halloween-themed activities planned to supervise locally.

It was Park Board member Beva Miller who attempted to invoke The Eagles’ mystique in trying to convince Ray to change her mind.

“I tried to tell her it’s like ‘Hotel California,’” Miller said of The Eagles’ classic with the haunting lyric, “You can check out any time you like but you can never leave.”

But Ray’s mind is already made up -- peaceful, easy feeling and all -- as the 2017 Indiana State University grad plans to head north to be closer to her longtime boyfriend.

“I am very thankful for all of the experiences and opportunities this position has given me and I am looking forward to taking what I have learned and applying it to my next job,” Ray said in her resignation letter to the board. “Thank you for giving me the opportunity to work for such a wonderful city and amazing Parks and Recreation Department.”

Park Director Rod Weinschenk and the board were reciprocal in their praise of Ray.

“Erin has graciously agreed to stay on through the Halloween Extravaganza,” Weinschenk noted in reference to the Oct. 27 events of Revenge of Frankenstein (1-2:30 p.m.), a pumpkin-carving contest (3-5 p.m.) and the Hunt for the Great Pumpkin (7:30 p.m.) for which registration can be made online at www.greencastleparks.com with a special price of $15 for all three programs.

Overall, Park Board member Cathy Merrell assessed, Ray’s effort “have been huge” in creating new programs and making existing ones better, as well as running the city pool more smoothly than it has operated in recent summers.

Weinschenk said the department is already in the process of advertising the position on Indiana parks websites and to career centers at Indiana State, Purdue University and others.

In the wake of her impending departure after running the pool the past two summers, Ray offered some suggestions for the future, especially in regard to increasing aquatic center revenues.

It was noted at the last Park Board meeting that the cost of operating the pool and providing lifeguards for two-hour pool rentals is barely covered by the lowest rental fees.

However, Ray, like the Park Board before her, strongly suggested leaving the daily admission price at $5 per person -- unless additional features, such as a lazy river, could be developed. Robe-Ann Park has plenty of room and pool deck space for such an addition, Ray noted.

She did suggest that a $3 entry fee for admission during “twilight hours” from 5-7 p.m. might attract additional patrons. Park Board members liked that notion but took no action on any of the fee-hike suggestions at this point.

Perhaps the most drastic change Ray suggested was the possibility of combining the admission of the pool and entry to the now-admission-free splash park during summer hours.

While no study has been done to verify it, pool and park personnel have expressed the opinion that free use of the splash park, particularly by moms with young children, has taken a bite out of pool revenues. Ray’s suggestion was leaving the splash park free from 10 a.m. until noon daily, but once the pool opens, the outside splash park gate would be closed, allowing only for entry through the pool after paying the $5 admission (current price) between noon and 7 p.m.

Of course, the city has an agreement with the Greencastle Civic League, which spearheaded the splash park project, that there would be free admission to splash park during its first 10 years, Park Board members noted.

This summer was the fourth year for operation of the Bob York Memorial Splash Park, which opened Aug. 4, 2014, so any possible change is a ways off.

“It’s something to think about in the future,” Weinschenk said of the revised fee possibility following Ray’s parting thoughts.

“It’s been a pleasure working for you,” Ray told the Park Board before it adjourned. “I’m going to miss it.”

Or, perhaps as another Eagles’ lyric -- ironically from “The New Kid in Town” -- offers, “They will never forget you ‘til somebody new comes along ...”

The Park Board will next meet in regular session at 7:30 p.m. Thursday, Nov. 1 at City Hall.