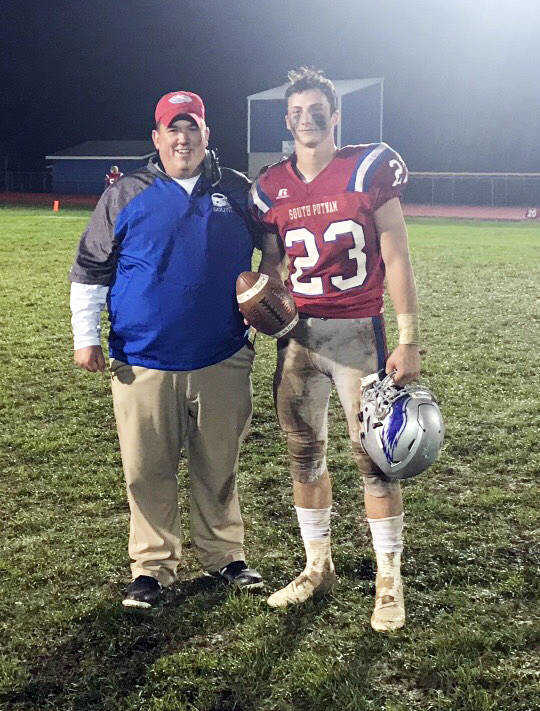 • Greencastle’s football team is one of 23 in the state to take an 8-1 record into tonight’s sectional games and is one of only two in Class 3A (joined by Brownstown Central).

Class 4A Evansville Central is one of the teams with only one loss. The Bears (coached by Troy Burgess, formerly of South Putnam) are ranked eighth in the final Associated Press rankings, and play No. 15 Evansville Reitz tonight.

The winner will play Northview in the semifinals next week. (OK, Northview plays at Owen Valley tonight — but we’re going to call that a win since John Harrell’s predicted score is 105-0 and the Knights scored 42 points in the first quarter in their earlier meeting.)

• Owen Valley will end its season winless, and is one of 20 teams entering sectional play tonight without a victory.

Crawfordsville actually got into the victory column last week for the first time with a 50-8 win over Frankfort, which also entered the game winless.

One of the other winless teams is Park Tudor, which forfeited its game against Monrovia earlier this month due to only having 13 available players.

The Panther program will be one to keep an eye on, as Greencastle has added Park Tudor to its schedule for the next two years to replace Cascade. Greencastle athletic director Doug Greenlee notes that the school has much higher roster numbers at the middle school level and is not expected to have trouble fielding a team.

Cloverdale will continue to play Cascade as one of its non-conference games.

• Nobody needs to add up the WIC fall all-sports standings to see who’s leading.

The 6-0 record brought the dominance by the West Division to a 21-3 mark spanning the past four seasons of the “new” 12-team WIC.

Administrators from the remaining 11 schools, following Cascade’s departure, will meet next week to finalize plans for the future of the league.

I have been informed of the plan most likely to be approved, but that information is not yet for public knowledge. I do know that the changes will bring an end to crossover games in football, which is a wonderful thing.

Stay tuned for the specifics.

• South Putnam’s Dalton Scott leads all of Class 1A football with 25 tackles for loss this season as well as being first among all WIC players so far this season.

Scott was honored after Friday’s game for surpassing the 400 mark for individual solo tackles.

Coach Nathan Aker noted the school’s record for total tackles (solo plus assisted) is 617 by Brad Toney from 1986-89, a record that will likely never be broken.

Greencastle junior tennis player Trent Ross, who advanced to the regional finals of the individual singles state tournament, earned all-District 4 honors for his play this year.

• Former Cloverdale basketball standout Cooper Neese lost his appeal to the NCAA this week to be eligible for the entire upcoming season at Indiana State.

Neese transferred from Butler to ISU early in the fall semester last year, and was required to sit out until the conclusion of the fall academic semester.

The Sycamores were hopeful of getting Neese for the fall semester, but were denied.

Neese’s collegiate debut will now come on Sunday, Dec. 16, when the Sycamores play at Texas Christian in a first-round “on campus” game in the Hawaiian Airlines Diamondhead Classic.

That game will be televised on ESPNU, as will each of the three games the Sycamores will play in Hawaii.