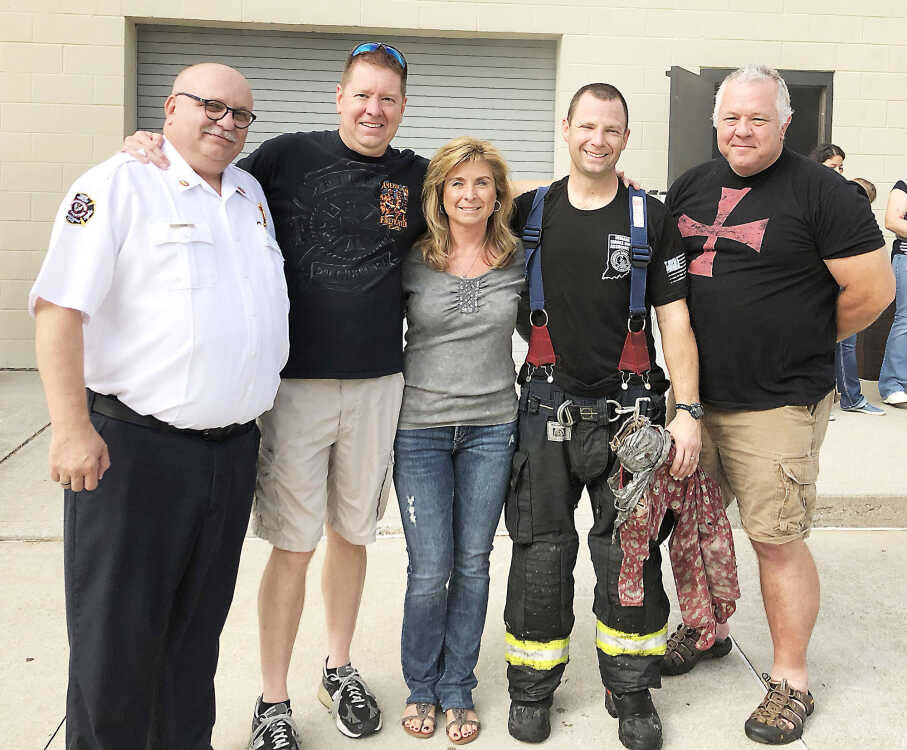 It’s an understatement to say that firefighters have a tough job. On any given day, they can come up against a variety of hazards that demand physical, as well as mental, grit.

Local firefighter Steve Shoffner recently had his limits and toughness tested as a participant in the Indiana Smoke Diver program, which tested his fitness in real life training scenarios.

The Smoke Diver program is a six-day, 60-hour intensive course designed to test the strength and mental aptitude of experienced firefighters through exercises that replicate extremes they may face on any given day.

The Indiana Smoke Diver program took in its first class in 2013, and is a derivative of a program that was started in Georgia in 1978 to assess firefighters and their preparation.

The Mount Meridian man has devoted much of his life to others as a first responder. Shoffner began his career as a firefighter with the Jefferson Township Fire Department in 1999. He joined the Brownsburg Fire Territory in 2005, and continues to serve as a volunteer at both departments.

Shoffner, 40, is the first firefighter serving Hendricks County to have completed the Smoke Diver training. He is also perhaps one of the oldest, at least with regard to the Indiana program, to do so.

Despite his nearly 20 years’ experience and his age as a firefighter, Shoffner saw the program as an opportunity to build his overall fitness, and to be more effective as a team member.

“It’s the closest thing you can get to training in real life,” Shoffner said. “It’s intensive for a reason, and that’s to see how prepared you can be for any situation.”

Shoffner enrolled in the program last year and made it through the first few days. However, he was prompted to withdraw by the program’s coordinators due to medical concerns. Participating in the course this year was his chance at personal redemption.

“I thought it would be something that I could get over,” Shoffner said. “But I couldn’t let it go. I gave myself many reasons not to do it, but then I remembered as a firefighter why I do what I do.”

After his first attempt, Shoffner committed to training for several months along with his firefighting duties, which built him up to come back to the program stronger and more focused.

Shoffner was one of 12 firefighters who qualified for the course, which was held from Sept. 30 to Oct. 5. However, he was one of only five who finished, a testament to how rigorous the program is in pushing the limits.

“The training is second to none,” Shoffner said. “One important idea is to build confidence in what you are doing in a real situation out there. That is why it is so hard to duplicate in the training we’d normally do.”

The program places great emphasis on nutrition and hydration, in addition to building mental toughness. The course puts the firefighters under stressful conditions which demand efficiency. Further still, Smoke Diver courses place a premium on being able to function with limited air supply.

The aim is not to build fitness, though it is a result of the training. Rather, character and effective decision making are the most imperative aspects tested in the Smoke Diver program.

“Going through the program proves to yourself that when you think you’re done, you can do so much more,” Shoffner related.

“And you’re doing these exercises in full gear,” he said matter-of-factly. “These are all possible scenarios you might face, and the challenge is being able to control the situation.”

Shoffner’s perseverance is also a testament to Shoffner’s character as a first-responder, seeing as completing the training provided him with no promotion, and no inherently professional reason to do so.

“I wanted to quit multiple times, just thinking to myself, ‘I can’t do this; Why am I putting myself through this?,’” he said. “But then I thought of others and those who depend on me being at my best.”

Shoffner also praised the professionalism and effort put in by the Smoke Diver personnel, who are volunteers who have completed the program themselves.

“All of the instructors are Smoke Divers, and they devote their time to bring in the next class,” Shoffner said. “It’s humbling, because they put in the time from setup to teardown, and they do it regardless because they want us to be better.”

This dedication has inspired Shoffner to promote the program as an opportunity for firefighters to test their limitations and build their self-confidence.

“It’s difficult, but it is totally worth it,” Shoffner said. “And I can’t thank the program and the volunteers enough, because it has made me a better firefighter.”