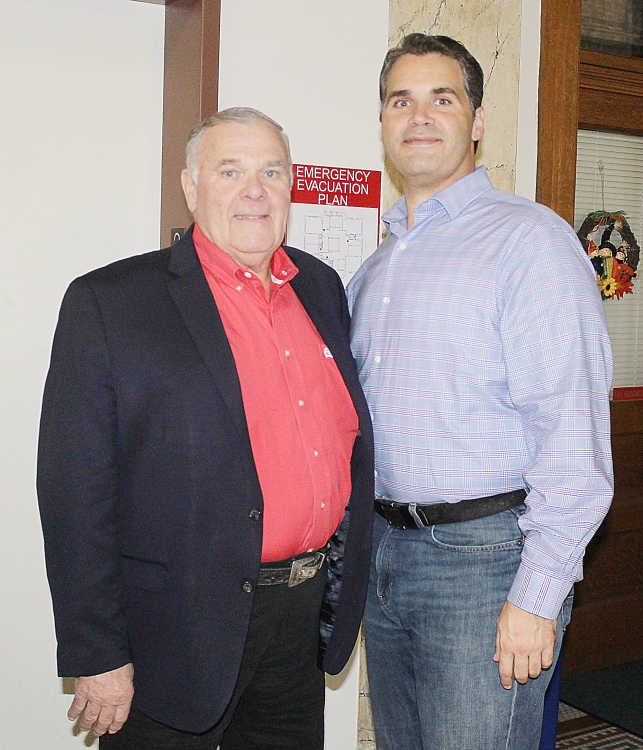 In what wound up being a big evening for them both, new Congressman Jim Baird and his son, new State Rep. Beau Baird, take in the scene at the Putnam County Courthouse Tuesday evening.
Banner Graphic/Jared Jernagan
Order this photo

The Bairds certainly didn’t hedge their bets this political season, they doubled down instead, and Tuesday dealt what amounts to a Republican blackjack.

Consequently, Mr. Baird goes to Washington and his son heads to Indianapolis.

With Jim Baird capturing the District 4 seat in the U.S. Congress and his son, Beau Baird, claiming the District 44 spot in the Indiana State Legislature, the Bairds of Greencastle have achieved something not even high-powered father-and-son Hoosier political tandems like Birch and Evan Bayh or Richard and Rodric Bray have ever accomplished. The Bairds will be serving simultaneously in those powerful positions when they’re sworn in as Jim succeeds Todd Rokita in Congress and son Beau follows in Jim’s footsteps to the Indiana General Assembly.

Jim Baird will head off to Washington, D.C., after a 96,688-43,731 triumph over Democrat Tobi Beck of Avon, a first-time political candidate, including an 8,473-3,384 showing in Putnam County that translated into a resounding 71.42 percent of the local vote.

Tuesday‘s voting completed a 2018 Putnam County general election turnout of 50.7 percent with 12,035 of the 23,738 registered local voters going to the polls.

Overall, Baird polled 68.9 percent of the vote in the 16-county District 4 race. That was just a tick better than son Beau, who took 68.8 percent of the vote in beating Fidler, a second-time candidate for the District 44 legislative post, by a 14,774-6,689 count in a district that encompasses all of Putnam County and parts of Clay, Parke, Owen and Morgan counties.

“I’ve got big shoes to fill,” Beau Baird said, smiling in the knowledge those belonged to his dad, “but I appreciate the confidence of the voters.”

Running for office for the first time, he assured, “it’s a lot different being the candidate than running a campaign. I learned a lot about civic responsibility.”

Beau will get his first taste of legislative living Wednesday when the state caucus convenes, followed by an orientation session and swearing-in ceremony later this month. Dad Jim will be sworn in a Washington, D.C., ceremony on Jan. 3.

Fidler, who worked tirelessly and was seemingly everywhere in trying to upset a Republican candidate in a GOP-dominated district, said she would not have done anything differently.

“It’s a difficult thing,” she said, to affect change within the whole process of the two-party system so heavily weighted in one direction in this area.

“I feel like it’s a loss for educators and students, our firefighters and EMTs, as well as working men and women,” she said. “I feel my loss is their loss. We still have so many things that I’m afraid aren’t going to be addressed.

“I wanted to work with the Addiction Task Force and get money from the state,” Fidler added. “And rural internet is important. I don’t feel like we’re going to get what we need there.”

Asked if she would run a third time for the District 44 seat, she quietly said, “No,” and followed that with a more forceful “No!” punctuated by a head shake.

“I want to get my PhD (in education),” said Fidler who turned 50 in May, “and continue to work as (Democrat) chair to make improvements locally. I’ll still be involved locally.”