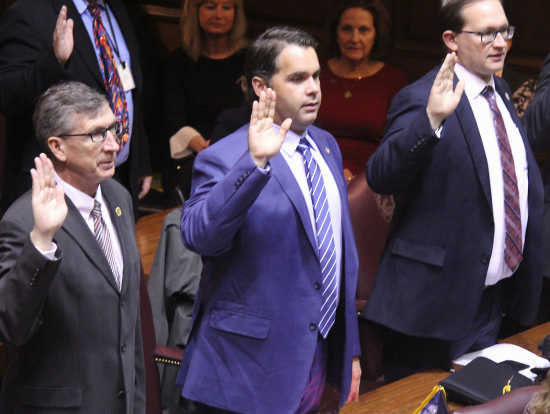 Beau Baird (center) of Greencastle is sworn in Tuesday to begin representing District 44 in the Indiana House. State Rep. Jack Jordan (R-Bremen) is on the left and State Rep. Martin Carbaugh (R-Fort Wayne is at the right.

Indiana Supreme Court Chief Justice Loretta H. Rush administered the oath in the House Chamber of the Indiana Statehouse during Organization Day at Indianapolis, marking the formal start to the legislative session.

"Taking the oath of office to represent House District 44 was an honor," Rep. Baird said, "and I am thankful for the support from our community. I look forward to putting my finance experience to work as we begin the process of creating a balanced budget for Indiana and finding the state's priorities."

Beau Baird succeeds his father, James Baird, who served four terms in the statehouse and has moved on to the U.S. Congress with a Nov. 6 victory in the District 4 congressional race. He will be sworn in Jan. 4 in Washington, D.C.

He is the chief financial officer of Indiana Home Care Plus, which is a home health care agency. He also owns and Baird Ranch, one of the largest quarter horse breeders in Indiana, located a few miles outside Greencastle.