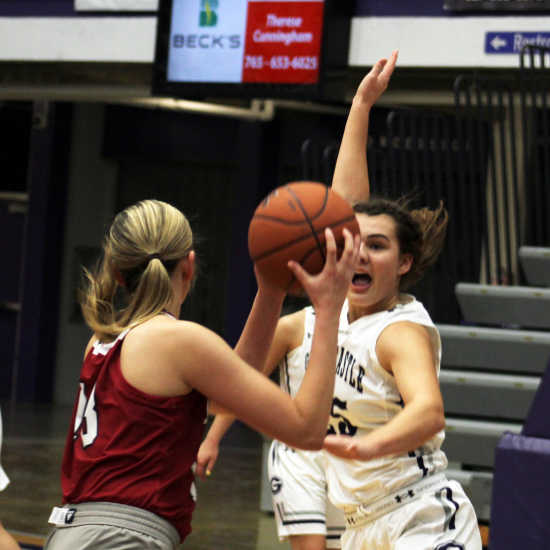 Greencastleĺs girlsĺ basketball team has approached the proverbial ôhumpö against its top opponents this season.

But, as in previous defeats to Benton Central, Cloverdale and Tri-West, the Cubs could not get over that hump against Class 3A No. 7-ranked Danville on Tuesday night.

The result was a 43-34 loss, and coach Tod Windlan didnĺt have to look far to see the areas of the game most responsible for his teamĺs defeat.

ôYou canĺt make 21 turnovers against a team like Danville,ö he said. ôThey didnĺt even press us, and we still turned the ball over. Then you have three kids who shot 15 free throws, and they only made seven.

Greencastle took its final lead of the game at 4-3 on an Allison Stevens free throw with 3:37 left in the first period.

Danville then scored seven straight points, on a basket by Maddie Patterson, a 3-pointer from all-stater Ella Collier and a basket from Jenna Cowart. A Claire Gillen free throw made the score 10-5 Danville at the firs stop.

Collier, who finished with a game-high 26 points, scored the first basket of the second period to put her team up 12-5.

Greencastle then put forth one of several short runs on the night, getting six straight points on an Ella Shields putback and a basket followed by two free throws from Stevens.

Those points were the only ones of the second period for the Cubs, however. Collier and Patterson hit baskets in the final two minutes of the half to give Danville a 16-11 lead at the break.

Greencastle hit just 5 of 10 free throws in the first half and had 12 turnovers.

The third period started horribly for the Tiger Cubs. After being held to seven points in the first half, Collier scored seven points in a 9-0 run that put Danville up 25-11.

Greencastle got five straight points on a basket and two free throws from Shields and a Jalyn Duff free throw.

Danville edged its lead up to 29-18 at the final stop.

Collier had not forced the issue offensively, with 14 points to that juncture, but finished off the Tiger Cubs with 12 of her teamĺs 14 points in the final period Ś including the final nine.

Trailing 37-24 with 5:35 left, the Cubs got six consecutive points on a Bailey Shuee trey, a Stevens free throw and a pair of free throws from Mia Shields.

After a Collier basket, Stevens hit back-to-back hoops and the Cubs trailed 39-34 with 2:48 left. They were done scoring, however, and Collier scored four points in the final 2:13 to wrap the game up Ś including a pair of free throws that gave her 50 consecutive made shots from the line.

Greencastle managed to hit just 10 of 30 field-goal attempts on the night. Taking away the 4 for 6 shooting from Stevens, the rest of the Cubs were just 6 of 24.

ôWhen you shoot the ball as poorly as we did tonight, and you have the ball down 39-34 in the fourth quarter, youĺre still in the game,ö Windlan said. ôThe good thing was that we got down by a lot in the third quarter and fought back. We turned the corner there in terms of competing.ö

Stevens managed to avoid foul problems that have plagued her this season and led the Cubs with 13 points. Ella Shields added eight points.

Windlan is keeping his confidence level high and making sure his players understand the big picture.

ôWe have to keep getting better and better,ö Windlan said. ôIf this is the best that 3A has to put in front of us, then weĺve got a chance down the road to do something good. Wins and losses really donĺt matter much in the regular season; the losses in the state tourney are the ones that matter.ö

Greencastle fell to 7-4 with the loss, and plays a Western Indiana Conference game at South Putnam on Friday.