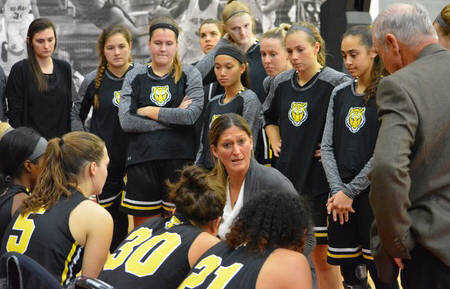 Kris Huffman is one of the fastest women's college basketball coaches ever to reach 600 wins.
DePauw photo

A pre-game recognition ceremony will take place prior to Saturday’s 1 p.m. tipoff against Oberlin in North Coast Athletic Conference action, and a post-game celebration will be in the Lilly Center lobby.

The DePauw and Oberlin men’s teams will play at 3 p.m. in the first women’s/men’s doubleheader of the season.

The No. 23-ranked DePauw women are 5-2 this season, dropping a pair of games to ranked teams in the Midwest Challenge at Rose-Hulman. The Tigers are 2-0 in NCAC action, winning 45-42 at Kenyon on Saturday and 61-52 over Wittenberg on Wednesday.

Huffman is now 601-122 in 26 seasons as DePauw’s head coach, ranking her fifth on all levels of NCAA women’s basketball history in terms of fewest games needed to reach 600 victories.

Following Saturday’s game, the Tigers are idle until playing two games in the Daytona Beach Shootout just before Christmas. They will host the Amy Hasbrook Tournament on Dec. 28-29 with Finlandia, Franklin and Thomas More.

DePauw’s men’s team is 5-1, suffering its first loss of the season at Wittenberg by a 77-66 score on Wednesday. The young Tigers have been led this season by a strong sophomore class, with five second-year players and one freshman figuring prominently in the rotation for coach Bill Fenlon.

In other local sports news:

• Opponents shine in rare blowouts – It’s not often that high school basketball games are decided by dozens of points, but the last two boys’ games I have covered have unfortunately wound up that way.

As my game story indicated, I’m convinced the Clovers did not play all that badly but Edgewood was just that exceptional.

Sophomore guard Trevor Taylor is a calm character for such a young player, and was able to combine slashing drives to the basket with silky-smooth jumpers from long range.

Senior Joe Kido, who has had a nice 10-year career at Edgewood (or so it seems), is evolving to one of my favorite high school players of recent times – and maybe ever. He’s a pass-first point guard, who still isn’t very tall but has bulked up and puts a lot of zip on his passes.

Kido also showed an improved outside shot last week, and the Mustangs are going to be tough to beat this season. That was proven early in the year when they picked up a rare win over Bloomington South.

On Wednesday night, Covenant Christian had a similarly dominant performance in a 96-45 win over North Putnam.

The game was loosely called, but for good reason – if the officials had called every instance of illegal contact that occurred, the game would still be going on as you read this column.

In no way did the officials decide who won that game, but the flow was definitely to CC’s favor. Sectional games are called much more closely, and it will be interesting to see if the Warriors are allowed to play that way in March.

In any event, Covenant Christian has to be considered as a serious threat to win the South Putnam Sectional.

• No news on WIC – Administrators are still working to make changes to the Western Indiana Conference structure after Cascade departs following this school year.

I know one of the most pressing issues is for teams to juggle their football schedules, with a yet-unannounced shifting of divisional alignments causing many schools to adjust who they will play next year and beyond.

Other changes are not needed nearly as soon, and will take longer to be formulated.

• Big numbers, name dropping – Greencastle grad Callan Taylor scored her 1,000th point on Monday for St. Mary-of-the-Woods in a loss at Earlham, becoming the 13th player in school history to hit that landmark.

Several friends and family members were on hand for the occasion, as well as Taylor’s high school coach – Bradley Key. Key’s Greenfield-Central Cougars are 4-5 this season, beating Muncie Central on Saturday to snap a four-game losing streak.

Junior guard Hannah Ferrell averages 23.8 points per game for Key’s squad, but injuries have kept the team from having more success this year.

Ironically, Greenfield-Central’s boys’ coach also has Putnam County ties. Lukas Haworth, who coached North Putnam’s boys’ team to an 11-11 record in 2013-14, is in his second year at the Hancock County school.

Haworth, whose Cougars were 7-16 last year and are 0-2 so far this year, preceded current North coach Collin McCartt.

A construction timetable was not given when the announcement was made recently.

Hopefully the Knights go with a traditional green coloring, rather than the gaudy bright red chosen by Edgewood.