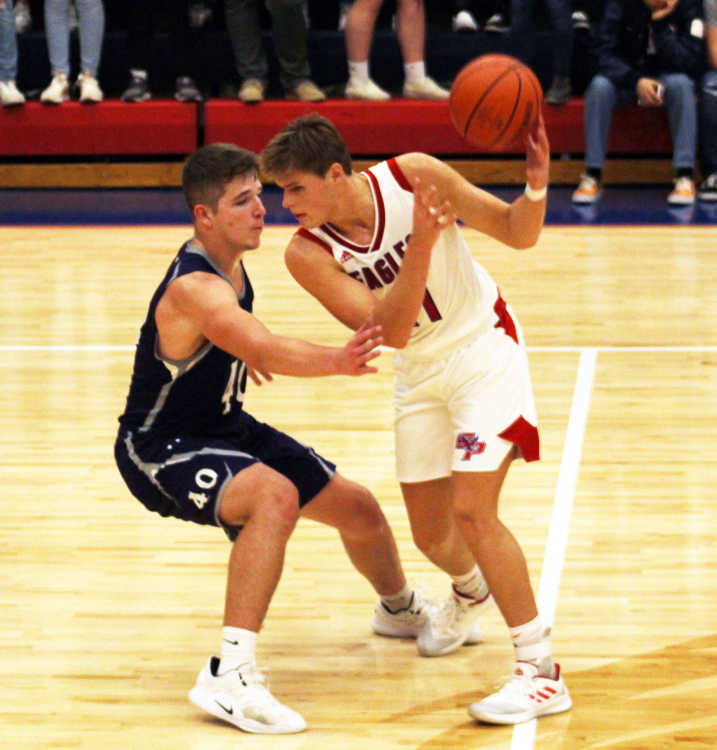 Greencastle’s Gavin Bollman plays tough defense on Allen Plunkett of South Putnam at the volleyball in the second half of Friday’s Eagle victory.
Banner Graphic/JOEY BENNETT

In the girls’ game, the Tiger Cubs were hoping to have a better performance than their last appearance on that court — in a big loss to Cloverdale in the county tournament championship game.

For the Eagle boys, it was their first appearance on the court after playing their first three games this season on the road.

Greencastle got its wish and picked up a 49-35 win in the girls’ game, while senior Allen Plunkett was nearly unstoppable for the Eagles as they defeated the Tiger Cubs 56-46 in the nightcap.

Being played before a near-capacity crowd with a sectional-type atmosphere, the Eagles clamped down early on the defensive end.

Following an early 7-4 Greencastle lead, the Eagles hit five 3-pointers over the final 4:13 of the period to jump out to a 21-16 lead at the first stop.

Plunkett — who finished with 31 points — hit three straight treys in less than a minute, and agreed that the new court suited him well on this night.

“It was the first time playing on it, and things went well, so I really like it,” he said with a laugh afterwards. “I’m trying to make nights like this to be the norm. The first night [at Clay City], I thought I played OK, but at North I couldn’t get anything going [1-15 from field].

“These last two games [including a 33-point game at Eminence last Saturday], I feel that’s what I need to do for my team to be successful,” he added. “I need to get other people open and get them the ball too. If I can play like this every night, I think we’ll be a very good basketball team.”

South continued its hot shooting from the outside, with Plunkett and Austin Arnold hitting treys to open the second period and give the Eagles a 27-20 lead with 4:55 until halftime.

Greencastle got a pair of baskets from Benny Parmley, one from Cade Plew and two free throws from Nick Sutherlin to help cut the deficit to 31-28 at halftime.

South nudged its lead up to 37-31 early in the third period before the Tiger Cubs came roaring back. Parmley hit a pair of free throws, Brody Whitaker hit a basket and Gavin Bollman scored on a tip-in to tie the game at 37-37 with 3:31 left in the third period.

Defenses toughened and the pace slowed for the rest of the period, which saw South take a 43-41 lead at the final stop. Thomas Fanning hit a basket with eight seconds left to give his team a slight lead.

Whitaker hit a trey to put the Cubs up by one, and Plunkett answered with a basket to regain the lead for South.

Bollman scored on an putback with 3:50 left to put Greencastle ahead for the final time at 46-45, but the Tiger Cubs were finished scoring on the night.

Plunkett scored the game’s final 11 points — including a banked-in trey from the top of the key — to account for all 13 in the period.

“They shot it really, really well,” Rector said. “Plunkett had the type of game we knew he was capable, but I thought we did a nice job of withstanding that. They hit seven threes in the first half, and when a team does that and you only yourself down by three points at halftime is a good spot to be in.

“For us to take the lead in the fourth quarter, despite shooting so abysmally from long range, says a lot about our team.”

For South coach Greg Dean, the victory was a sweet one on the new playing surface.

“That’s one of the things we put on our board before the game as something we could accomplish,” he said. “You’ve got homecoming, the bucket game, Greencastle being a county rival and the new court. Once everything gets going you kind of forget about it.

“They liked it, played well and shot the ball,” he added. “We defended our tails off, and our guys did everything that was asked of them in order to win.”

Dean thought his team’s defensive effort was good, considering how efficient Greencastle is with the ball.

“They are so hard to guard, and they do so many good things offensively,” he said. “They have a handful of guys who are hard to guard. Our guys were all excited before the game, and this group has worked to be that defensive team.”

Plunkett was the only Eagle in double figures, while Whitaker led Greencastle with 17 and Parmley added 13.

Greencastle controlled the girls’ game from the beginning, but the Eagles stayed close for a while before the Cubs closed it out with a strong finish. 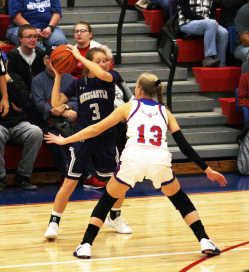 South led 11-7 early on back-to-back treys from Brionna Egold and Lexi Vanihel, but the Cubs got eight straight points on a basket by Allison Stevens and a basket plus a free throw from both Stevens and Ella Shields.

Stevens hit a trey at the buzzer to put her team up 18-12 at the first stop.

Greencastle led 24-20 after an evenly-played second quarter and 35-29 after three periods.

A Vanihel basket with 5:30 left kept the Eagles close at 38-33, but Greencastle outscored them 10-2 the rest of the way.

“What won the game for us was our defense in the second half. ,” Greencastle coach Tod Windlan said. “Madison Rodgers only scored two points, but defensively she got a lot of deflections and steals. She got the ball to the right people at the right time on offense.”

South’s Brian Gardner was pleased with how his team battled.

“Sometimes we are a little quick on the offensive side, and don’t always get the great look,” he said. “Defensively we played well, but we gave up some key offensive rebounds at times.